Organic compounds are widely dispersed and likely to occur as environmental hazards in water. Among different organic pollutants, dyes have been designated as priority pollutants by many countries, because of their acute toxicity and long persistence. Thus, they must be degraded to below environmentally accepted levels before safe disposal to public health. Three dimensional nanomaterials attract much attention in recent years. Preparing three dimensional nanomaterials with specific surface area, good chemical activity and adsorption selectivity properties.

Three-dimensional metal oxide micro-/nanostructures have received much attention because of their potential applications in the fields of catalysis, electrical, water treatment. The self-assembly of inorganic nanostructured building blocks into 3D ordered hierarchical nanostructures is fascinating because variation of the arrangements of the building blocks provides a method to tune the properties of the material. Rare earth nanomaterials [1-3] with specific surface area, good chemical activity and adsorption selectivity excellent properties has potential applications in fluorescent, hydrogen storage, catalysis and other fields [4].

In recent years, many synthesis efforts have focused on using vesicles with special structures and their unique self-assembling properties as templates to prepare novel structural materials. Zou YC had fabricated BaZrO3 hollow microspheres by a simple reflux method [5]. Shanmugasundaram A had fabricated hierarchical mesoporous In2O3 with enhanced CO sensing and photocatalytic performance [6].

The aim of this work was to synthesize urchin-flowerlike [7] hierarchical LaNiO3 [8-10] spheres by a modified coprecipitation method from ultrahigh dilute (vesicle) solutions [11,12], and to study their structural characteristics. The LaNiO3 spheres’ structure and catalytic activity were elaborately studied by varying the mole ratio of La and Ni. This method is attractive because of its relative simplicity, environmental friendliness, affordability, and suitability for large-scale production. Various characterization techniques, namely scanning electron microscopy (SEM), X-ray diffraction (XRD), transmission electron microscopy (TEM), and temperature-programmed reduction (TPR), were used to characterize the physical and chemical properties of the synthesized materials [13-16].

Synthesis of urchin-flowerlike hierarchical LaNiO3 spheres. A solution of vesicles was obtained by dissolving surfactants CTAB and SDBS (CTAB: SDBS=1:2 molar ratio; 0.028 mol/L surfactant) in twice-distilled water at 30°C for 18 h. The urchin-flowerlike hierarchical LaNiO3 spheres were synthesized by a modified coprecipitation method from an ultrahigh dilute (vesicle) solution. 0.649 g La(NO3)3·6H2O and Ni(NO3)2·6H2O (n(La):n(Ni)=1:1, 2:1, 3:1, 4:1) were dissolved in 15 and 10 mL of deionized water, respectively. These solutions were added to 75 mL of the vesicle solution. A precipitate was obtained by the drop wise addition of NaOH solution until the solution pH reached 8.5. The resultant light-blue slurry was decanted, filtered, and washed several times with twice-distilled water to remove anion impurities. The collected precipitate was oven-dried at 80 K for 12 h, crushed using an agate mortar, and then calcined at 750 K for 5 h at 5 K min-1 in air to obtain the urchin-flowerlike hierarchical LaNiO3-1 (LaNiO3-2, LaNiO3-3, LaNiO-4) spheres (Scheme 1).

The morphology was studied by SEM on a JEOL JSM-6360 electron microscope. TEM was performed with an FEI-TECHNI-G2 instrument at an operating voltage of 200 kV. XRD analysis was performed using a MAC Science MXP18 diffractometer with Cu Kα1 radiation (λ=1.5405 Å) at 40 kV and 30 mA for 2θ from 10-80°C at 10°C/min to identify the amorphous structure. The surface composition and surface electronic state were analyzed by X-ray photoelectron spectroscopy (XPS) using a Kratos Axis Ultra DLD instrument at 160 eV pass energy. Al Kα radiation was used to excite the photoelectrons. The binding energy value of each element was corrected using C 1s=284.6 eV as a reference. TPR experiments were carried out in a fixed-bed reactor. Sample (50 mg) was loaded, and 4.2% H2/N2 reduction gas (30 mL/min) was introduced. The temperature of the reactor was raised linearly from room temperature to 850°C at 10°C/min using a temperature controller. For the catalysis study, 60 mL of 30 mg/L Reactive Brilliant Red (RB) solution was taken in a beaker and 20 mg of LaNiO3 was added to it. The resulting solution was stirred while keeping away from the light source and then the solution was centrifuged to separate the LaNiO3. 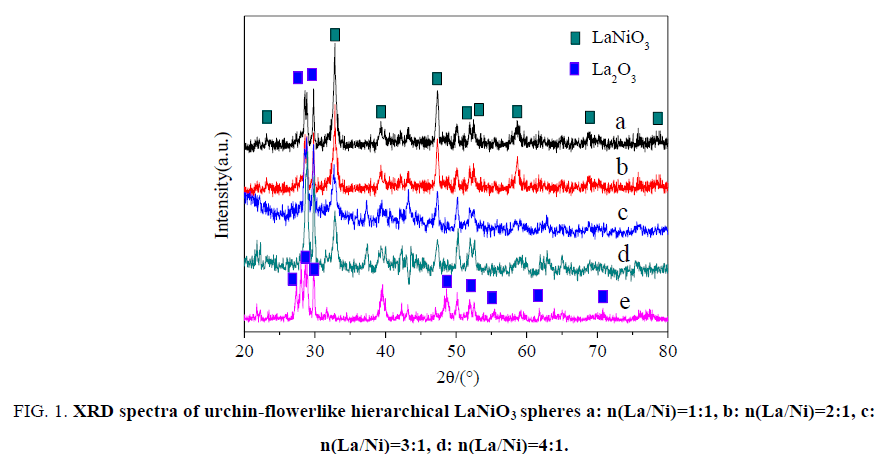 The urchin-flowerlike hierarchical LaNiO3 spheres were synthesized successfully by a modified coprecipitation method from ultrahigh dilute (vesicle) solution. Various LaNiO3 microstructures were obtained at different magnifications as shown in Figure. 2. The SEM micrographs in Figure. 2a show that the LaNiO3-3 spheres diameters are ~20 μm to 30 μm. Figure. 2b shows a single LaNiO3-3 spheres with a typical sea urchin-flowerlike hierarchical structure; having a common centre. Figure. 2c shows regular multilayer nanoribbons with spiny three-dimensional structure. The LaNiO3-3 spheres are composed of ultrathin nanosheets (~100 nm), which self-assemble in orderly rows, termed nanoribbons (Figure. 2d). Figure. 4 presents the nitrogen absorption and desorption isotherms for the LaNiO3. The BET surface area of the LaNiO3-3 is 37.67 m2g-1. The pore diameter distribution of the hierarchical LaNiO3-3 was measured by the Barret-Joyner-Halenda(BJH) method and is shown in the insets of Figure. 5. The pore size calculated by the adsorption branch is in the range of 100-110 nm. The present hierarchical LaNiO3-3 sphere with nanosheets will potentially exhibit superior performance in catalysis properties. 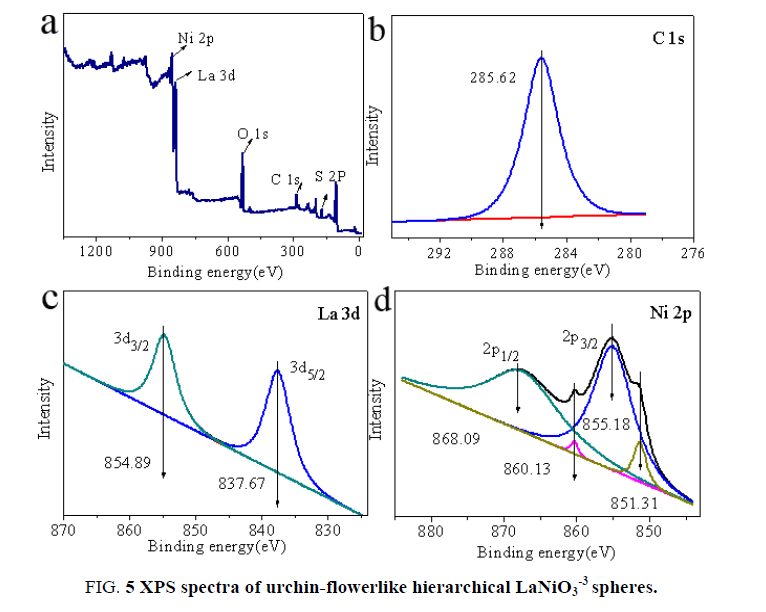 The corresponding XPS spectra provide further structural information on the obtained urchin-flowerlike hierarchical LaNiO3 spheres. The spectra of all element valence bands for the LaNiO3 spheres are shown in Figure. 4. Figure. 4a shows that the sample contains elemental La, Ni, O, C, and S. The C and S were introduced via the surfactant (SDBS). In Figure. 4b, the C 1s spectrum consists of a single peak with a binding energy of 285.62 eV. In Figure. 4c, the La 3d spectrum [23,24] consists of two individual peaks at 837.67 and 854.89 eV, which can be attributed to the La 3d5/2 and La 3d3/2 binding energies, respectively. The binding energies of La 3d5/2 and La 3d3/2 are larger than the standard values (La 3d5/2 836.0 eV; La 3d3/2 853.0 eV) [25-26]. Furthermore, the La 3d peaks are shifted by 1.6 eV toward the larger binding energies because of the La-Ni interaction.

H2-TPR experiments were conducted to investigate the relative reducibility of urchin-flowerlike hierarchical LaNiO3-3 spheres with different La/Ni molar ratios. Figure. 6 shows the TPR profiles of the LaNiO3 spheres. The LaNiO3 spheres had three main reduction peaks around 350°C (Tr1), 500°C(Tr2), 680 °C(Tr3). Concerning the peak area, the second (reduction desk) and third peaks of LaNiO3-3 are much higher than those of LaNiO3-1, LaNiO3-2 and LaNiO3-4 while those for the second peaks are not clear. According to Zeng GM [32] the reduction of LaNiO3 proceeds in three steps:

Figure. 7(1) displays the RB degradation activity of different urchin-flowerlike hierarchical LaNiO3 spheres by plotting Ct/Co as a function of time [34]. Here Co and Ct are the initial concentration and concentration of RB at time, respectively. As shown in Figure. 7(1) a, RB degradation without a photo catalyst was also performed, and the results demonstrated that the degradation of RB was very slow in the absence of a photo catalyst under ultraviolet-light irradiation. As shown in Figure. 7(1), in the presence of hierarchical LaNiO3 spheres but in darkness, the removal rate of RB was 18% within 30 min. Almost no change occurred during the 30 min, which was attributed to the low specific surface area of the samples. All change occurred during the next 270 min, which was attributed to good photocatalytic activities of LaNiO3. It can be seen 95.63% of the RB was degraded by LaNiO3-3 spheres under identical conditions, but under irradiation with ultraviolet light. This demonstrated that the hierarchical LaNiO3-3 sphere nanostructures exhibited excellent in situ ultraviolet-light-driven photocatalytic performance.

Figure. 7(3) shows the absorbance vs. wavelength plots for urchin-flowerlike hierarchical LaNiO3 spheres. It is interesting to note that the absorption spectra show a distinct broad feature at 300 nm for the LaNiO3 spheres. The absorption peaks indicate the zero dimensional characteristics of corresponding samples, with the lower wavelength absorption feature is assigned to the size-quantized particles.

In summary, the modified coprecipitation method has been used to produce urchin-flowerlike hierarchical LaNiO3 spheres. This approach provides a relatively simple, environmentally friendly, economical method that is suitable for large-scale production and is affordable for the preparation of magnetic microspheres with a tunable diameter range of 20 μm to 30 μm. Furthermore, we report here another important finding on the urchin-flowerlike hierarchical LaNiO3 spheres as a catalyst for MB degradation with high degradation efficiency.