Surface Physico-chemical and thermodynamic studies of some aqueous surfactant KDS, NaDS, NaDBS, solution were carried out as a function of molality and temperature. Thermodynamic properties of micellization behavior of anionic surfactants KDS, NaDS, NaDBS, in presence of different concentration of urea and butanol-water were studied at 303 K, 308 K, 313 K,318 K. CMC and degree of ionization of the micelle, β, were estimated from the dependence of the specific conductivity on molality. The temperature dependence of lnXcmc was studied by the curve lnXcmc/temperature by keeping in mind Muller equation.

The chain reaction of cleaner on the micellization bearing of ionic surfactants in aqueous solutions has been highly studied long using different techniques [1]. The CMC of surfactants in recent literature has been defined as the concentration of the surfactants solution at which the molecule self-aggregate to from spherically shaped micelles. The CMC indicates commonly linear order of absorption separation breaking point, at down which highest of the monomeric case and beyond which basically all further surfactants access the micelle case. The reviews are being focused on the significance of extreme organic solvents on the stock behavior of surfactants and the structure properties of aggregates formed [2-4]. The micelle design of a fluid solution knows to be changed by inorganic supplement and this has been various surveys as regards the effect of organic additives on the CMC of anionic surfactants. Kabir-ud-Din [5] announced that CMC of anionic and non-anionic surfactants greatly increase with adding of urea in fluid solution.

The effect of alcohol-water solvent system with different composition of additive urea and varying temperature on the collection behavior of aqueous solution of KDS, NaDS, NaDBS has been study through conductivity measurements. The plots of conductivity vs. temperature were used to determine the CMC and degree of ionization, β, of different salts KDS, NaDS, NaDBS micelles at the different molality and temperature. The degree of micelle ionization was inversely proportional to mixture composition but directly propositional to surfactant concentration temperature, there trends are indicative of the interaction of SDS ionic head group and the association of SDS molecule with the binary mixed solvents [6].

The free energy, entropy, and enthalpy, of micellization additionally the variation in heat capacity (ΔC°p,m) of surfactant are the monomeric micelle structures on the CMC, are given by using equations:

Where R is the universal gas constant, T is the absolute temperature and CMC is the critical micelle concentration. Entropy of micellization was calculated using this equation:

Heat capacity of micellization is obtained by using relation [8]:

These analyzing the temperature dependent on CMC in aqueous solution of KDS, NaDS, NaDBS were taken thermodynamic parameters derived from these equation were found out.

Every unit of the either conductivity calculated at the given temperature. The standard isotherm for KDS solution is shown in Figure 2. The molalities and conductivity increases with increase in temperature. The CMC standards are calculated by the interaction of the straight-line fragmentation of isotherm. The proportion of slopes of the straight-line fragment of the isotherm alike to the post and pre-micelle molality range is appropriate like the degree of micelle ionization β. The degree of micelle ionization of KDS was determined by the ratio of slope of specific conductance vs. molality curves above and below the variation point at different temperature. 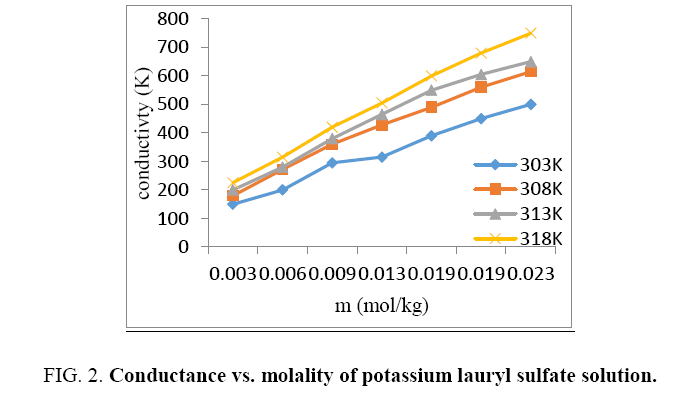 Degree of micelles ionization of a rises according to the temperature indication that counter ions all being desorbed from the micelle during dilution and same effect observed with increasing temperature [10].

The degree of micelle ionization or apparent degree of counter ion dissociation β is define by asserting that the aggregation no. is dependent only on the concentration, C, of counter ions in the aqueous solution [11], Temperature dependence of the calculate β value of the analyzing salts Figure 3, shows β rises of temperature. The degree of micelle ionization increased with increasing in the chain length. Let us assume furthermore that the typical changes in the heat capacity vary vertically by means of temperature following Muller [12] equation is found.

Where β is the degree of ionization; ΔC°p,m is the heat capacity.

Table 2: Parameters resulting from the ΔCop,m at various temperature. 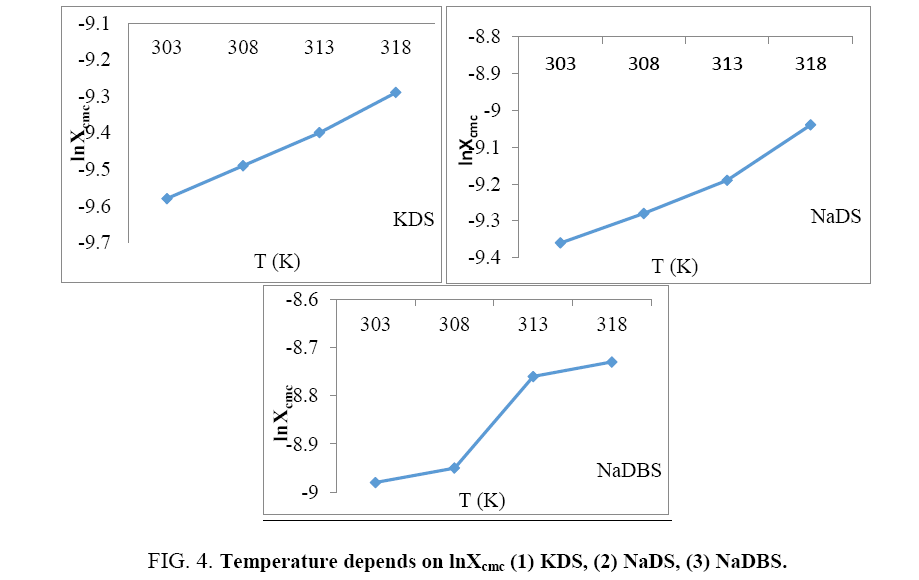 The parameter enable us to estimate the standards of free energy of the micelle, The surfactants like a role of temperature over and above the enthalpy and entropy contribution toward

illustrates the tempt dependence of

for the three surfactants. The Figure 5 explains that KDS and NaDS show almost equal results. And increase in temperature there are regular decrease in free energy and trend follows in NaDBS but is more drastic change than that of KDS and NaDS. The plots clarify that the value of the free energy of formation of KDS, NaDS, NaDBS micelles are negative at different temperature. They become more negative with increasing temperature, showing increasing stability. 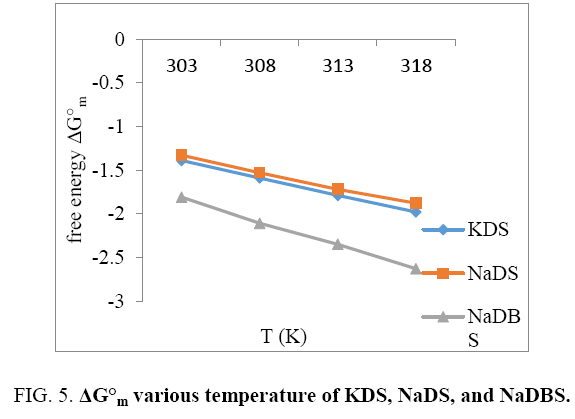 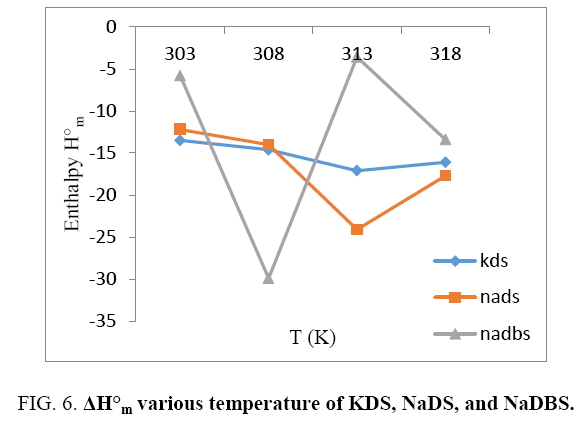 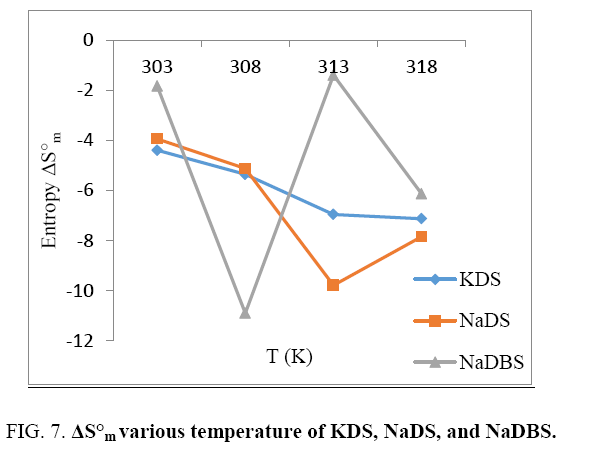 If we caste a glance at structures of KDS, NaDS and NaDBS we find that KDS and NaDS are having similar structures except in cation. KDS has a better cleansing action indicated by the presence of the potassium ion. NaDBS again due to the presence of benzene ring does not easily undergo oxidation and show abnormal behavior.

From the results obtained, it was shown that degree of micelle ionization β, molality of salts KDS, NaDS and NaDBS, may be projected from the plot of definite conductivity vs. molality. The β morals were originated to be significantly superior of the KDS than the NaDBS. The CMC standards reveal linearly reliance on temperature and chain length. It was also shown that temperature dependence of lnXcmc can be fitted to Muller equation partly. We calculated the temperature dependencies of β, and ΔCop,m for the micellization. From these parameters are enthalpy, entropy and Gibbs free energy of micelles are expected as a purpose of temperature.