Four new complexes were synthesized by the reaction of 2,4-dichloro-6-{(hydroxyimino) [1-(4-methylphenyl)-1H-pyrazol-4-yl] methyl} phenol ligand with transition metal ions Manganese (Mn2+, Complex-I), Iron (Fe2+, Complex-II), Cobalt (Co2+, Complex-III) and Nickel (Ni2, Complex-IV). The metal complexes have been characterized with the help of elemental analysis, IR spectroscopy, UV-Visible, thermal analysis and molar conductance measurements. The elemental analysis data exhibited the formation of complex with 2:1 (L:M) ratio. The Schiff bases are bidentate coordinating through the imine nitrogen and phenolic oxygen of salicyloyl pyrazoleoximes. Based on analytical and spectral data, four-coordinate geometry was assigned for all complexes. The electronic absorption spectra suggest the square planer geometry for the complexes. The molar conductivity data showed the non-electrolytic nature of the complexes.

Metals have an esteemed place in medicinal chemistry. Transition metal represents the d block elements which includes group 3 to 12 on the periodic Table. Their d shells are in incompletely filled. This property of transition metal resulted in the formation of coordination complexes. The complexes are having advances in inorganic chemistry and offer better opportunities to use metal complexes as therapeutic agents [1].

A number of scientists in the past have tried to find some correlation between chemical structure and physiological or biological properties. It is now well-known fact that the activity of a compound mainly depends on heterocyclic moiety present in the particular compound, the nature of the substituent and the position of the substituents in these compounds. All literature review reveled that compound containing pyrazole moiety, fluorinated compounds showed good biological applications.

Due to the emergence of new fungal pathogens 1-(3, 4 difluorophenyl-4-(2-hydroxybenzoyl)-1H-pyrazole), in order to broaden its antifungal [22] activity and increase its potency it has great importance to synthesize the novel transition metal complexes with 2,4-dichloro-6-{(hydroxyimino) [1-(4-methylphenyl)-1H-pyrazol-4-yl] methyl} phenol.

All chemicals are pure (Sigma Aldrich, SRL, Fischer scientific etc.,) the solvents are analytical grade and purified before used. Distilled water and ethyl alcohol were always used. Melting points of the synthesized complexes were recorded by open glass capillaries method and are uncorrected. The molar conductance was measured using 0.001 M solution of complexes in DMF using digital conductivity meter (Elico cm-180). The elemental analysis data were recorded on Thermo Scientific elemental analyzer (FLASH 2000). The FTIR spectra of ligand and complexes were measured in the range 4000 cm-1 to 350 cm-1 with Shimadzu FTIR spectrophotometer. The TGA spectra were recorded using Shimadzu Thermometric Analyzer (TGA-50). The electronic absorption spectra were recorded on Shimadzu UV-Visible double beam spectrophotometer. Standard volumetric methods were used to find the concentration of metal ions [23]. The ligand 2,4-dichloro-6-{(hydroxyimino) [1-(4-methylphenyl)-1H-pyrazol-4-yl] methyl} phenol was synthesized using the method reported in our previous investigation [24].

The metal sulphate (MnSO4, FeSO4, CoSO4 and NiSO4) solutions (0.001 mol) were prepared in distilled water and acidified by concentrated Hydrochloric acid. The acidic metal sulphate solution was warmed on hot water bath. The ligand solution (0.002 mol) was prepared in dry ethanol. The ligand solution was added slowly drop after drop in metal sulphate solution with continuous stirring. Slight excess of ligand solution was added to ensure the complete complexation. The resulting reaction mixture was made alkaline by treating it with alcoholic ammonia. The content was then digested on boiling water bath where colored complex precipitated out. The colored product was filtered on suction, washed first with small portion of hot distilled water and then by dry ethyl alcohol to remove excess of ligand. It was then dried under ambient conditions (Figure. 1 ).

The Schiff base metal (II) complexes (I-IV) were synthesized by the stoichiometric reaction of metal sulphate and ligands in a molar ratio 1:2 (M:L). The synthesized complexes were characterized by various physical, analytical and spectroscopic techniques. The elemental analysis data was found to be in agreement with proposed formulae and supports for ML2 composition of the complexes. The complexes formed are of various colours which are different from colour of ligand indicating the formation complexes. The melting points of complexes are more than 200°C and which are different and higher than that of free ligands an evidence for complexation. The synthesized complexes are non-hygroscopic, non-deliquescent and stable at room temperature. The solubility of complexes was examined in different polar and non-polar solvents. All the complexes are soluble in DMF, DMSO but insoluble in water, acetone, chloroform, ethyl alcohol and carbon tetrachloride. The analytical data and solubility behavior of complexes suggest that all the synthesized complexes are monomers. The solution conductivities of synthesized complexes were measured at Department of Chemistry, Ahmednagar College, Ahmednagar. A simple digital conductivity meter (Elico Model cm-180) with dip type cell having platinized platinum electrodes with cell constant 0.88 was used for this purpose. The instrument and conductivity cell were calibrated using 0.01 M KCl solution at room temperature. The metal complexes were dissolved in DMF and the molar conductivities of their 0.001 M solutions were measured at room temperature. The low molar conductivity values indicate that the complexes are non-electrolyte and covalent in nature [25]. The molar conductance values are presented in Table 1.

Table 1. Physical, analytical and molar conductance of ligand and its metal complexes. Table 2. The significant peaks in FTIR spectra of free ligand and its complexes.

The Thermogravimetric analyses of metal complexes have been carried out on Shimadzu TGA-50 thermometric analyzer at Department of Chemistry, New Arts, Commerce and Science College, Ahmednagar. The instrument was calibrated using CuSO4·5H2O. The metal complexes were heated from 30°C to 900°C at constant heating rate 10°C per minute in air atmosphere. Alternatively, weight loss of substance was recorded as a function of time with increase in temperature at uniform rate. The weight loss in the substance was used to understand the stoichiometry, thermal stability, evolution of gases, types of water molecules and decomposition products. TGA spectra of free ligand and its transition metal complexes are shown in Figure. 7. According to Thermogravimetric data complexes (I-IV) exhibit high stability and melt with decomposition in the range 200°C to 280°C. In TGA thermograms of complexes (I-IV) does not show any significant weight loss up to 200°C indicating there is no lattice or coordinated water molecules. Further increase in temperature, the complexes decompose slowly leading to formation of air stable metal oxide as the end product at 800°C to 900°C. 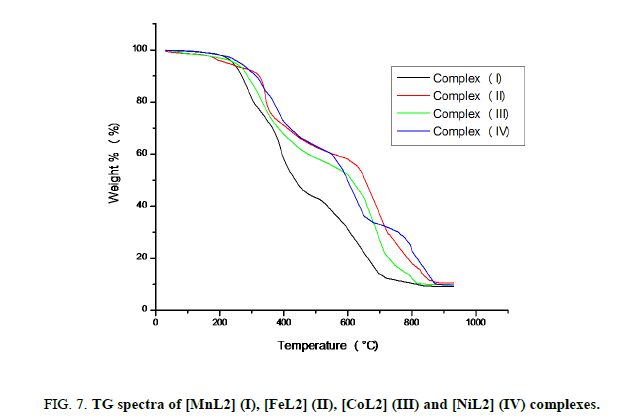 The electronic spectrum gives most convincing evidence concerning the geometry of the complexes. In transition metal complexes, the absorptions in visible region is relatively weak and are associated with transitions largely localized on metal ion, transfer of electron from one atom to other atom so called charge transfer bands and d→d transitions. The absorption bands in ultra violet region are intense and associated with π→π* and n→π* transitions due to organic molecules. In the present study, the electronic absorption spectra of metal complexes showed two strong band in the region 266 nm and 335 nm due to π→π* and n→π* transitions. These bands are attributed to organic molecules and appeared to lower value than free ligands. Along with that in the absorption spectra of metal complexes, weak bands observed in the region 448 nm to 579 nm. These are associated with strong charge transfer bands and characteristics of square planar geometry for the complexes [30].

1H NMR spectra of selected compounds was recorded in DMSO-d6 as solvent and TMS as internal standard in the range 0 δ ppm to 16 δ ppm. However due to presence of metal ion, proton resonance was not effected and gave broad peaks indicating the formation of metal complexes.

The powder X-ray diffraction of some selected synthesized metal complexes were obtained in solid form at SAIF, Punjab University Chandigarh. The powder XRD spectra were scanned on Goniometer powder diffraction PW 3050/60 with Cu-K-alpha-1 radiation (λ=1.5406 Å). The powder XRD patterns were measured in 2 theta range between 5.0084 and 89.9744 with step size 0.0170. The XRD spectra of metal complexes were used for indexing the pattern and to find out the unit dimensions and space groups. The X-ray diffractogram of all complexes showed broad peaks, which indicate polycrystalline nature [31]. Though polycrystalline nature of complexes was observed they were generally not soluble in non-polar solvents.

Ligand 2,4-dichloro-6-{(hydroxyimino) [1-(4-methylphenyl)-1H-pyrazol-4-yl] methyl} phenol (LH) and its four new complexes (I-IV) were synthesized. The newly synthesized Mn(II), Fe(II), Co(II) and Ni(II) complexes were characterized by spectral and elemental analysis. The formations of complexes were also confirmed by thermal methods of analysis. The physical and spectroscopic characterization of the complexes revealed that phenolic oxygen and imine nitrogen atom of oxime group are coordinate with the metal ion. The complexes are having good solubility in DMF and DMSO but insoluble in water and other organic solvents. The thermal analysis data suggested that complexes have high stability below 200°C and decomposes slowly after 200°C giving formation of sTable residue of corresponding metal oxides. The electronic absorption spectra indicate square planer geometry for the complexes. The low molar conductance value suggested the non-electrolytic nature of the complexes. The powder X-ray diffractogram indicates polycrystalline nature of the complexes.