The present work aims to optimize an efficient, economic and environmental hydrothermal method to leach vanadium from boiler ash residue using sodium carbonate and bicarbonate mixture solution. For this purpose, many factors include liquid/solid phase ratio, leaching temperature, leaching time, oxidant addition and it’s percent and ash fineness are studied and optimized. From the obtained results, it is concluded that, maximum vanadium leaching (84.3%) is achieved from grinded ash (74 μm) using carbonate-bicarbonate binary solution at liquid/ash ratio of 20/1 in the presence of KMnO4 as oxidant. The obtained leach liquor is then subjected to pH readjusted at 5-6. This is followed by ammonium chloride (NH4Cl) addition under heating (40°C) and stirring to selective precipitation the leached vanadium species as ammonium meta-metavanadate (NH4VO3). The precipitate is dried at 100°C and then roasted at 750°C to obtain V2O5 oxide.

Vanadium as metal and oxide are very important in many applications especially in steel alloys, aerospace applications, ceramics and glass besides as catalysts in chemical industries [1]. In nuclear applications, the short half-life, good neutron capture, low induced activation, high strength at elevated temperatures, superior ductility at low temperatures besides resistance to irradiation damage makes vanadium alloys (V-Ti-Cr) an excellent material for the inner structure of the fusion reactors in addition in purification of uranium [2]. Vanadium naturally exist in carnotite [K2(UO2)2(VO4)2·3H2O], vanadinite [Pb5(VO4)3Cl] and patronite [VS4] ores in addition vanadium-bearing magnetite ores, but vanadium recovery from these ores is not efficient for the previous using. So, the oil ashes as additional vanadium source is interested [3-5].

The oil ashes referred the residues produced from combustion crude oils as fuel in power plants (several million tons are generated annually) but small amounts of these ashes are reused [6]. Chemically the ash is composed of two main parts; the first one is the organic part includes sulfates, nitrogen-containing compounds besides unburned carbon while the other is the inorganic fraction that contains heavy metals particularly vanadium, nickel, silicon and iron in addition of aluminum, magnesium, zinc and sodium species [7]. Vanadium content in oil ashes ranges from 2.5% to 30% according to the oil origin and the ash consumption conditions. The recovery of vanadium from oil ashes has received attention since 1960 not only an economic concern (metals recovery) but also from environmental terms to humans, waters and soils [8-10].

For these purposes many techniques are applied for vanadium leaching from ashes, but the common methods are hydrometallurgy (acidic, alkaline) and pyro-hydrometallurgy (roasting) processes [11-19]. The most applied among these methods are acid leaching, alkali leaching and acid/alkali or water leaching after roasting [18]. Generally, the hydrometallurgical processes have some benefits than pyro-hydrometallurgy include; low cost requirements and air pollutions releasing [20,21]. For the hydrometallurgical processes; despite the acidic methods have many advantages than alkaline namely; higher metals recovery, simple and low cost but these methods consume high acids, require acids resistance equipment’s besides producing high wastes. In contrast with acidic methods, the alkaline solutions have many advantages which include; high selective, direct precipitation the leached metals, direct wastes discharge [22,23]. Based on the leaching medium nature and solution pH, vanadium species present as the Pourbaix diagram demonstrated FIG. 1 [24-26]. The main target of this work is optimized an environment and effective procedure to hydrothermal leaching of vanadium content from the boiler ash residue using binary carbonate-bicarbonate solution, this process is followed by vanadium precipitation from the obtained liquor solution. FIG. 1: Pourbaix diagram of vanadium in the aqueous medium.

Boiler ash is a generic term produced after burning of petroleum products in generating thermal power stations. Bottom ash refers to the ash that falls through the airflow to the bottom of the boiler and represents about 5-15 wt % from the produce ash. Consequently, bottom ash is considered as hazardous residue but less than fly ash [27]. The bottom ash properties are a friable, amorphous, greyish color after exposure to sunlight and its specific gravity is 2.3 with high carbon content.

The finely grinded ash sample (74 µm) is mixed with 0.5 M Na2CO3-NaHCO3 (mol/mol) mixture solution in 150 ml a round Pyrex flask equipped with a reflux condenser (Na2CO3-NaHCO3 solution/ash (ml/g) ratio was 20/1 at 90°C for 2 h at 400 rpm stirring speed). The obtained solution after cooling is filtrated then subjected to metals analysis. The obtained data indicates that, iron; titanium, manganese and nickel metal ions are not leached by using Na2CO3-NaHCO3 solution which improves the vanadium leaching with high purity in the precipitation step. Similar results are obtained during leaching of vanadium from ash by using NaOH to avoid iron, nickel and titanium species leaching, while small silica amount is dissolved [19]. In the present work the studied ash sample contain low silica content (1.91%) so Na2CO3-NaHCO3 solution is a suitable choice for vanadium leaching from the ash sample. The other contents that consume carbonate-bicarbonate as sulphide, sulphates and organic matters are indicated in the sample. During the leaching process, the magnetic stirrer bar immersed in the solution is captured the impurities having magnetic properties especially iron which insoluble by using the alkali leaching solution.

The boiler ash sample has been characterized by scanning electron microscopy (SEM) and XRD analysis FIG. 2 and the wet chemical analysis. Trace elements in the ash are determined using ICP method. The fine studied sample after grinding and sieving is subjected to alkali hydrothermal digestion process using sodium carbonate and bi-carbonate binary solution in presence of potassium permanganate as oxidant. Factors include carbonate, bi-carbonate and oxidant concentrations, sample fineness, solution/solid phase ratio; digestion time and temperature are studied and optimized.

FIG. 2: The XRD and SEM analysis of the boiler oil ash sample.

The effect of 0.5 M Na2CO3-NaHCO3/ash ratio (ml/g) on vanadium leaching from the ash sample is studied from 5/1 to 30/1 while other conditions are; 100°C reaction temperature and 150 min digestion time in presence of 0.01 M KMnO4 as oxidant. The obtained results maintain that, the leaching efficiency of vanadium increases from 32.1 to 82.4% as the solution/ash ratio increases from 5/1 to 20/1. Increasing the solution/ash ratio to 25/1 lead to a slightly vanadium leaching increases (83.2%) as presented in FIG. 3. Increasing the liquid/ash ratio to 30/1 has a vanadium leaching decreasing (79.3%), which is believed to be due to iron sodium silicate [NaFe (SiO3)2] formation which makes vanadium leaching becomes worse. In this context; the study for alkali leaching of vanadium with high selectivity is carried [31]. The obtained results show selective vanadium dissolution than many species specially nickel and iron. Some studies indicate that, vanadium often present in the sample in a reduced state and carbonate form a soluble pentavalent vanadate (VO3-) complexes [3]. A study for the speciation of vanadium using alkaline solutions is applied, the obtained data indicates that, vanadium species after leaching presented as VO3. (OH)2-, VO3-, V2O74- and VO43- [26]. There is an additional advantage of using carbonate-bicarbonate solution is the viability of CO32- anion to be regenerated through the reaction as equation 1 show. There is another advantage using carbonate solution than acids for vanadium leaching from samples containing, iron nickel and calcium species, the carbonate is selective for vanadium than iron and calcium species despite sodium carbonate converts the insoluble calcium-vanadate in the sample to calcium carbonate and releases water soluble sodium vanadate species as in equation 4 [32]. The proposed reactions present in equations 1-3. For maximum vanadium dissolution, the generated NaOH species in equations 1 and 2 must be removed. The produced NaOH is neutralized by NaHCO3 addition, to prevent re-precipitation of the dissolved vanadium as equation 5 indicated. 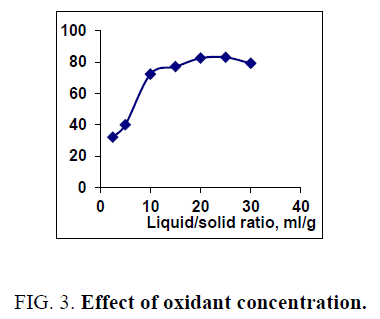 Generally, the alkaline leaching of vanadium from ores should be applied under oxidation conditions for vanadium dissolution completely. The overall vanadium loss during the leaching process is attributed to the insufficient oxidizing of V (IV) to V (V) [25]. Vanadium oxidation is conducted using chosen oxidant as potassium permanganate, potassium chlorate, hydrogen peroxide etc. Despite oxidants efficiency in alkaline medium is less than in the acidic ones but an oxidant should be used for enhances the vanadium leaching. Potassium permanganate is a powerful oxidizing agent in alkaline or acidic solution, so in the present work we use KMnO4 as oxidant. Several experiments are carried out at S/L of 1/20 at 90°C-95°C for 3 h digestion time to define the minimum amount of oxidant compatible with maximum vanadium leaching efficiency. Potassium permanganate amount addition is varied from 0.002 to 0.02 M. From the obtained results in FIG. 4. It is obvious that, KMnO4 as oxidant played a critical effect in vanadium dissolution by releasing active oxygen for V (IV)/V (V) oxidation controlled as equations 6-8 indicated. The leaching efficiency of vanadium increases from 53.2 to 82.7% as KMnO4 concentration increases from 0 to 0.005 M. As KMnO4 concentration increases to 0.006 M, the extraction efficiency of vanadium increases to 83.4%. The same behavior is found during leaching uranium from carnotite ore in presence of KMnO4 as oxidant using alkaline solution [33]. Complete uranium leaching is achieved in presence KMnO4 which emphasizes the role of KMnO4 as oxidant in the basic mediums. In this context, a study is carried out using KClO3 as oxidant and 2% (w/w) KClO3 is the good choice for completely vanadium leaching from oil fly ash using sodium hydroxide solution [34].

Generally; the more finely divided the solid is the faster the reactions proceed (leaching efficiency). To study the effect of ash grain size on vanadium dissolution from the treated ash using carbonate and bicarbonate mixture solution, a leaching experiment using ash grain size ranging from 105-44 µm (140 to 325 mesh size) are performed for a reaction time of 2 h at 90°C at a liquid/solid ratio of 20/1 in presence of 0.006 M KMnO4 as oxidant. The obtained results in FIG. 7 reveals that, the leaching efficiency of vanadium is increased by decreasing the sample grain size due to increasing the surface area of grains exposed to leaching solution which facilitates the alkali attack. The recovery efficiency of vanadium is increased from 61.2% to 83.1% as the grain fineness decreased from 105 µm to 74 µm. More grinding than 44 µm resulted in only about 0.85% increases in the vanadium leaching efficiency. Therefore, 74 µm would be considered the optimum grain size.

The leach liquor solution after alkaline leaching using sodium carbonate and bicarbonate mixture solution under the optimized conditions is applied and the resulted solution mainly contains vanadium, silicon, sodium, magnesium and aluminum with traces of chromium species with leaching percentages.

For vanadium precipitation, the pH of the obtained leach liquor is adjusted to pH 7 using H2SO4 solution FIG. 8A to precipitate the leached Al species (V remained in solution). The solution pH is readjusted at 5-6, then 1 M ammonium chloride (NH4Cl) is added to the solution under stirring. The reaction (under agitation at 50°C) is set to about 24 h. Vanadium is precipitated as ammonium meta-metavanadate (NH4VO3) as provided in FIG. 8B, the precipitation percent reaches 97% (calculated by measuring the un-precipitated vanadium amount in the leach liquor solution). The obtained red colored cake as shown in FIG. 8C after filtration and washing with distilled water is dried at 100°C for 24 h and roasted at 750°C to obtain a black colored vanadium oxide FIG. 8D. The remaining filtrates besides the obtained oxides are analyzed for metals content.

In the present work a modified method is investigated for leaching of vanadium from the boiler oil ash using a carbonate-bicarbonate binary mixture solution. Maximum vanadium leaching (84.3%) is obtained using leaching solution at solid/liquid phase ratio at 1/20 (g/ml) at 80°C leaching temperature for 2 h digestion time in presence of KMnO4 as oxidant as optimum conditions. The obtained liquor solution is then subjected to vanadium recovery by using ammonium chloride (NH4Cl) at slightly acidic solution (pH; 6) to precipitate vanadium as ammonium meta-metavanadate (NH4VO3). The obtained precipitate is then dried at 100°C and ignited at 750°C for obtain vanadium pentoxide (V2O5) residue.