2Department of Chemistry and Chemical engineering, Institute for Color Science and Technology, Iran

Most alkylations are typically conducted using alcohols, not alkyl halides. Alcohols are less expensive than alkyl halides and their alkylation does not produce salts, the disposal of which can be problematic. Key to the alkylation of alcohols is the use of catalyst that renders the hydroxyl group a good leaving group. The largest scale N-alkylation is the production of the methylamines from ammonia and methanol, resulting in approximately 500,000 tons/year of methylamine, dimethyl-amine, and trimethylamine. The reaction is poorly selective, requiring separation of the three products. Many other industrially significant alkyl amines are produced, again on a large scale, from the alcohols. Epoxides are another class of halide-free N-alkylating agents, useful in the production of ethanolamines, in the last years, leading the N-Alkylation amines reaction by alcohols in the presence of Cu catalyzer to act in low pressure and temperature conditions. Among the used catalyzers can point Cu-Acetate (Cu(OAC)2) and Cu-Oxide (CuO) also Aniline with Benzyl alcohol reaction.

Amine alkylation (amino-de-halogenation) is a type of organic reaction between an alkyl halide and ammonia or an amine. The reaction is called nucleophilic aliphatic substitution (of the halide), and the reaction product is a higher substituted amine. The method is widely used in the laboratory, but is less important industrially, where alkyl halides are not preferred alkylating agents. Amines and ammonia are generally sufficiently basic to undergo direct alkylation, often under mild conditions. The reactions are difficult to control because the reaction product (a primary amine or a secondary amine) are often more nucleophilic than the precursor and will thus preferentially react with the alkylating agent. For example, reaction of 1-bromooctane with ammonia yields almost equal amounts of the primary amine and the secondary amine. Therefore, for laboratory purposes, N-alkylation is often limited to the synthesis of tertiary amines. A notable exception is the reactivity of alpha-halo carboxylic acids that do permit synthesis of primary amines with ammonia. N-alkylation is a general and useful route to quaternary ammonium salts from tertiary amines, because over alkylation is not possible.

First, mix 30 ml of Ortho Xylene as solvent, 15 mmol Benzyl Alcohol with 20 mmol Aniline and 5 mole Cu-Chromite nano-catalyzer then 35 mmol potassium carbonate in 50 ml volumetric flask and temperature of 110°C for 8 hrs. Solution separating process was that after reaction time, solution filtered and washed by ethyl acetate as observed by the two phases of organic and aqueous solutions in separator funnel [1]. The Organic phase included synthesized compound. Then dried the organic phase by sodium sulphate finally specification tests performed.

In the reaction of aniline and benzyl amine by auto transfer hydrogen method, the production is N-phenyl benzyl amine then performs physical (melting point determination) and chemical (PH and Heisenberg) tests on production after purification by Ethyl Acetate and no-water Sodium sulphate extractions. After pilot N-phenyl benzyl amine synthesis, performed H-NMR7 and IR spectroscopy test that confirmed the intended product [2]. The mechanism of this reaction is so complex and there isn’t any acceptable mechanism for that but the proposed mechanism (Figure. 1) is that catalyzer provides the intermediate product for nucleophilic amine groups’ reaction by separating the alcoholic hydrogen. Finally by acting the Nucleophilic Amine reaction with provided intermediate, Imine synthesizes. In the reduction step that is the most complex step, Imine reduces by catalyzer that absorbed the alcoholic Hydrogen and Amine produce. 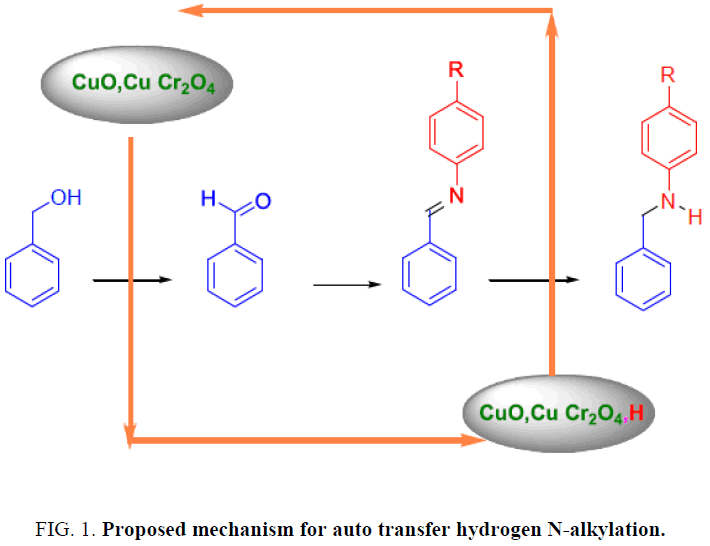 According to H-NMR result of N-Phenyl benzyl Amine, is match with standard sample. By studying the N-Phenyl benzyl Amine structure, know that this compound has three protons that should appear in three areas. A proton is related to Ammine Hydrogen that connected to Benzene is about 4.1 ppm and other two protons are about 4.7 ppm.

Ten protons relate to Phenyl cycles that about 6-8 ppm. Also used IR spectroscopy for specifying Functional groups. Synthesized and standard IR spectrum showed in (Figure. 2 and Figure. 3). According to spectrums Amine groups has a peak of 3200-3600 cm-1. Because its second type so has one peak. According to that reaction performed in different conditions by using the synthesized sample as control sample and thin layer chromatography technique the results are below: As TABLE 1 shows reaction is efficient in neutral Nitrogen gas atmosphere. This is because that Nitrogen prevents exiting of Benzyl alcohol and preventing oxidation of intermediate products by Oxygen [4]. Rising heat cause efficiency reduction because of parallel reactions and bi-products.

TABLE 2: N-alkylation Aniline reaction in different solvents and base.

In this step, specified that due to received efficient, the best condition for reaction is temperature of 11°C in neutral gas environment and PH of 9 [6]. The N-alkylation reaction performed in mentioned conditions by Aniline derivations those results shown in (TABLE 3). Results confirm that existence of electron affinity groups cause efficiency reduction that matches with proposed mechanism, because in step of producing imine, nucleophilic amine group attack to intermediate compound and as we know electron affinity groups reduce possibility of this attack by consequence of Imine production and efficiency. Also Electron donor groups cause increasing efficiency by activating amine groups.

It should be noted that produced amines detection by mentioned physical and chemical methods for specification of N-phenyl benzyl amine accepted. It has done chemical tests for specification of productions in this way, first performed PH test to ensure that synthesized material is amine then studied type of amine by Heisenberg test and after that determined the material melting point [7-9]. All of these tests confirmed the intended amine for any experiment. All of the steps include: preparing, recycling product and catalyzer, that had done same as aniline reaction [10].

With this review, we have tried to show the versatility and usefulness of heterogeneous and homogeneous catalysts in the alkylation of amines through the so-called hydrogen auto transfer process. The use of alcohols and amines, which are normally considered as nucleophiles in organic textbooks, acting in these transformations as electrophiles is highly convenient owing to the easy handling, stability, wide availability, and low cost of such compounds. Furthermore, the use of this strategy of alkylation substitutes the classical ones employing hazardous and expensive alkyl halides, sulfonates, or sulfates and allows a greener process, since the only generated waste is water or ammonia [11,12]. Moreover, the low molecular weight of wastes makes this synthetic strategy unbeatable as far as the atom efficiency numbers are concerned. These facts, together with the plethora of new and useful homogeneous and heterogeneous catalysts, make it possible to perform these reactions with excellent selectivity and also make this synthetic strategy very attractive not only for academia but also for industrial purposes. In the near future, these processes might be applied to a wide range of nitrogen containing compounds, which are interesting because of their application in several chemical industries (such as pharmaceutical, agrochemical, detergent, dye, or textile industries), with the whole synthetic protocol being cleaner, greener, safer, and more economical and meeting the sustainability, all goals highly demanded by our present day society. In the near future, the development of recoverable, more effective or chiral catalysts, as well as the application of this type of transformation to other new substrates will improve the scope of this protocol, with the information review here serving to envisage the new possibilities and the new niches unoccupied now-a-days [13]. 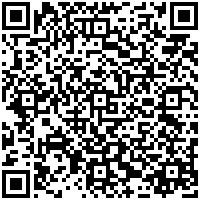