Ising model as a simplified model of reality, exhibits phase transition. Combinational factor method is a numerical method which is applied for infinite lattices with a limited number of rows or small m. In this work, we used the combinatorial factor method to find the thermodynamic properties of the spin glass (A1-xBx). For simplicity, we supposed that, the spin glass can be considered as one-dimensional lattice with nearest neighbor interactions. For this model, having an exact combinatorial factor and accordingly the corresponding exact energy, the Helmholtz free energy is minimized. Overall, one dimensional spin glass does not show phase transition as like as one-dimensional Ising model. There are same trends in temperature and entropy in this model, in both constant x and f cases, a same trend was seen for maximum of heat capacity (where f is constant, and Coefficient is interaction energies between the nearest neighbor pair of ii.).

Ising [1-4] model includes discrete variables displaying magnetic moment of atomic spins which could be one of two possible states namely +1 or -1 [5,6]. This model as a simplified model of reality, exhibits phase transition [7,8]. Spin glasses [9] are disordered system in which the disorder is such strong that there is a competition between different terms in the Hamiltonian which is called frustration [10]. In spin glass, which also have disorder, it turns out that there are some states in which the orientation of a large number of spin are different from ground states, but they are close in energy with that. There are barriers on all scales and so a spin glass at low temperatures will have very slow dynamics and never fully equilibrate [11]. So, the spin glass does indeed constitute a new state of magnetism, distinctly different from the long-rang ordered Ferro and antiferromagnetic phases [12]. In addition, a spin glass exhibits high magnetic frustration. The origin of the behavior can be either a disordered structure (such as that of a conventional, chemical glass) or a disordered magnetic doping in an otherwise regular structure. Since spin glasses have a lot of ground states, exploring those have not been achieved in experimental time scales. Unusual experimental properties make spin glasses an appealing area of extensive theoretical and computational investigations. Based on a set of replicas of partition function of the system, mean field theory is vastly used in a great deal of early theoretical studies on spin glasses. Sherrington and Kirkpatrick had introduced an influential exactly solvable model of spin glasses [5]. Modelling of slow dynamics of magnetization and complex non-ergodic equilibrium state was introduced as theoretical extensions of their work.

Spin glass systems have been extensively investigated in condensed matter physics. In the simplest scheme, Spin glass are considered as a collection of classical spins with quenched random frustrated interactions. A frozen disordered state is the lowest-temperature state. This state has zero magnetization while the local spontaneous magnetization at a given site is nonzero. Quantum systems may also show glassy behavior [13].

We consider a one-dimensional spin glass, which is conformed of two interacting particles as A and B so that, the numbers of these equal NA and NB , respectively

The chemical formula for such lattice may be considered as

s are the interaction energies between the nearest neighbor pair of ij. With the assumption of

is the number of pairs of ij, we could write the total energy of the lattice as:

Considering a regular configuration for this lattice as:

And relating the values of

Assuming that, the interaction energies between pairs are as follow

with the same value of

s are available? To answer this question, first we consider all distributions in which A is involved. Thus, irrespective of

group first, we may calculate the total number of possible ways for distribution of

pairs, in such a way that the number of each of them remains constant. The number of this distribution,

Then, similar to step 1, we may find the number of distributions in which B is involved, as

Due to the fact that these distributions are independent of each other, the total number of configurations,

for such lattice with the nearest neighbor interaction energy, can be given as:

With regard to chemical formula

All calculations were carried out by a personal computer, using well-known software called Matlab. According Figure 1, we see that, in constant f when x rises, the maximum of each heat capacity increases. So that, for x = 0.5 (Ising model) the critical point of this heat capacity riches to its maximum value. In Figure 2, one could see that, when the temperature decreases, the entropy decreases, too. Also, in each temperature, when x rises, the entropy also increases. We see that, in constant x when f rises the maximum of each heat capacity increases (Figure 3). The results of these calculations for the reduced Helmholtz free energy, internal energy, entropy, and the reduced heat capacity are given in supplementary files [14-16] (Figure 4-16). 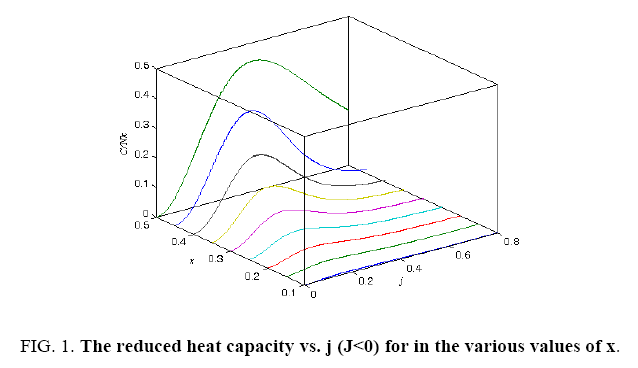 Figure 1: The reduced heat capacity vs. j (J<0) for in the various values of x. 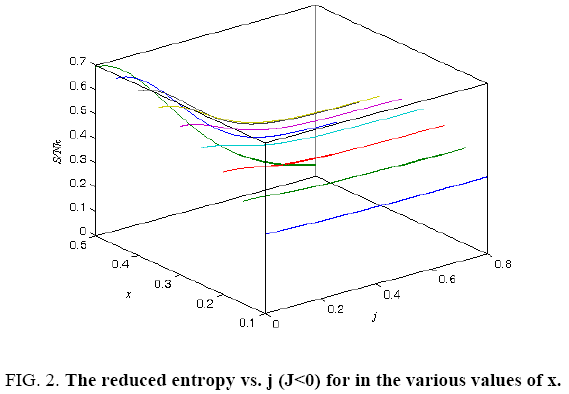 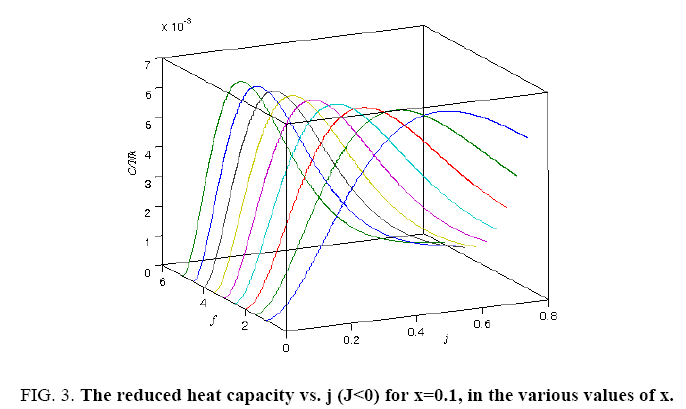 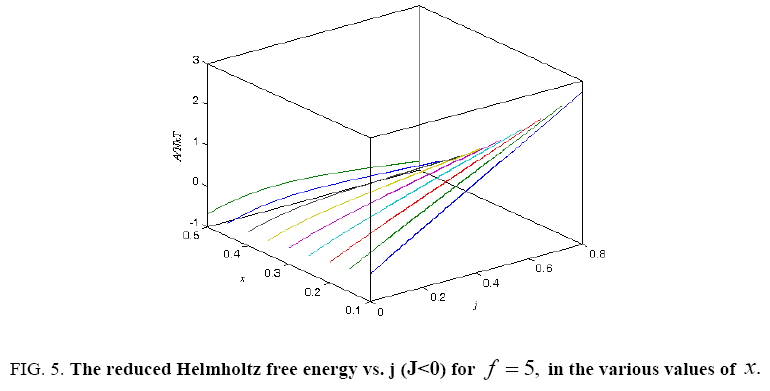 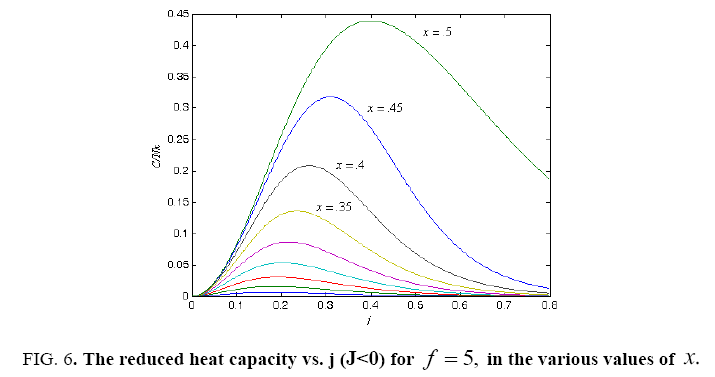 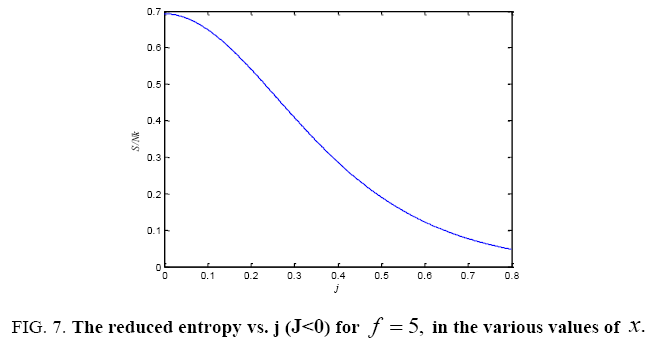 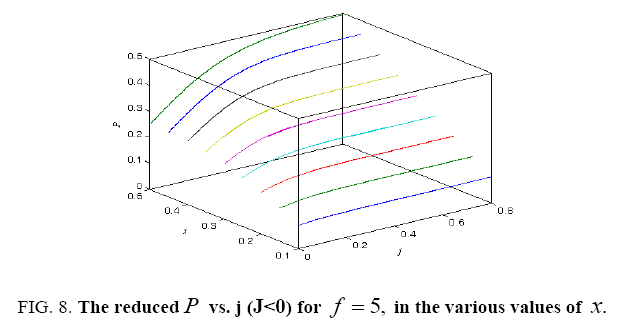 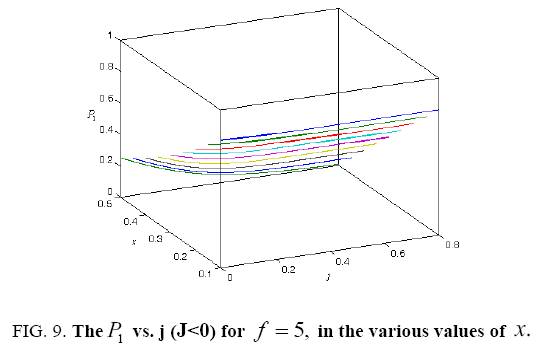 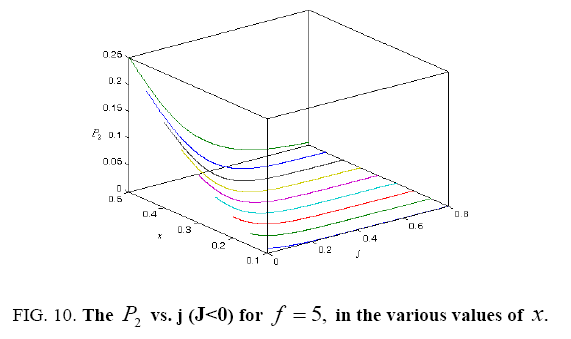 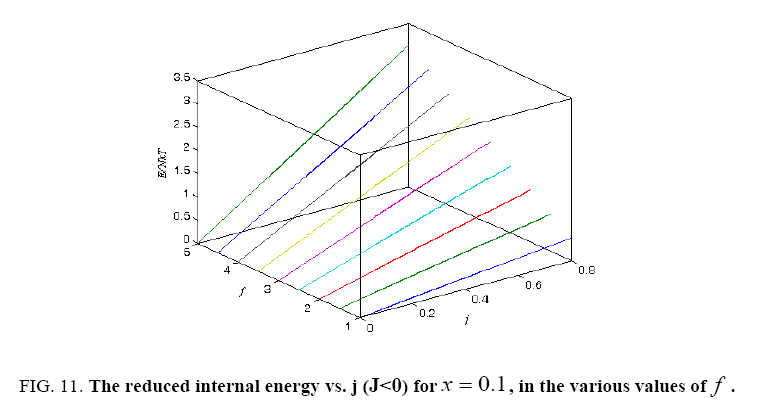 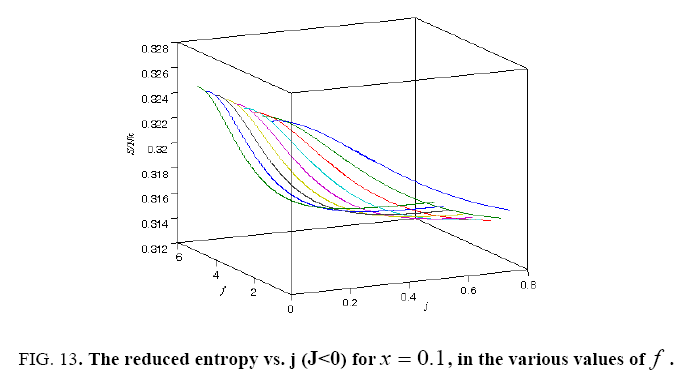 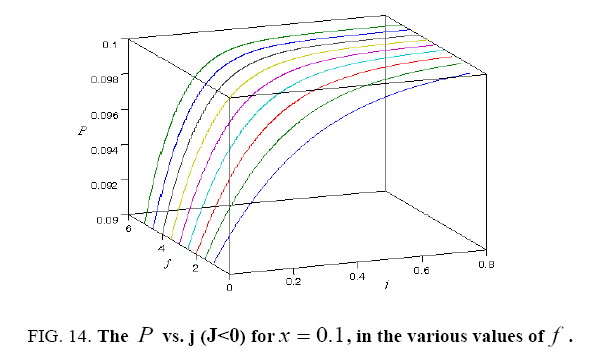 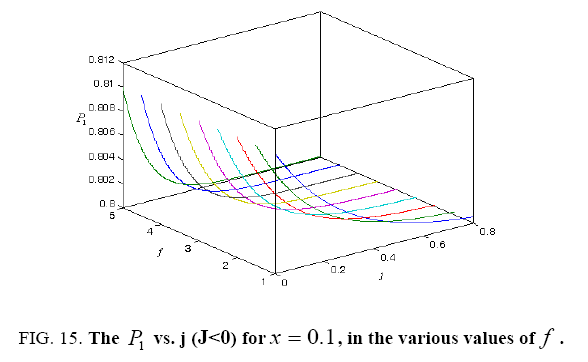 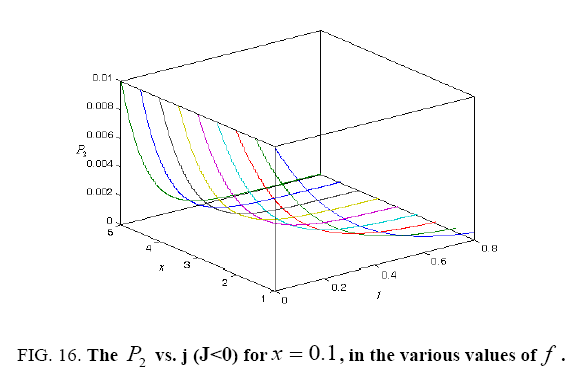 We would like to thank Razi University for financial support. 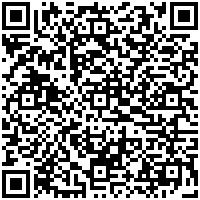