1,2-Benzenedicarboxylic acid esters are commonly used for the production of plastics. Research shows that phthalates are usually associated with endocrine disruption and developmental alteration. This research identified different kinds of phthalates from different heating conditions and storage time. However, many studies have investigated the migration of phthalates into bottled water via sunlight, microwave and storage time but no substantial research on the introduction of heat to the bottle at different temperatures for a period of time. Bottled water with storage time of 6 months from different companies were collected from xi’an China and used for the determination of the toxicity, and migration of phthalates (PAEs) at different temperatures 40, 60, 80 and 100 degrees respectively. Liquid-liquid extraction method was used and the extracts analyzed using a gas chromatography mass spectroscopy (GC-MS) for analysis. Result showed that DEHP had the highest concentration from the different heating conditions (5.25 × 10-5 at 60 degrees, 2.373 × 10-4 at 80 degrees, and 2.373 × 10-3 at 100 degrees). Heat and longer time of storage of plastic bottled water increases the migration rate of PAEs into the water, therefore consumers of plastic bottled water should reduce frequent intake under conditions above 40 degrees to avoid chronic toxicity of phthalate esters.

Phthalates are lipophilic and diesters of ortho-phthalic acid used in many applications as plasticizers to soften polyvinylchloride (PVC) polymers used to increase flexibility and compatibility of plastics, they are also commonly found in fat-containing foods. The most widely used phthalates are di (2-ethylhexyl) phthalate (DEHP) diisodecyl phthalates (DIDP) and diisononyl phthalates (DINP). DEHP are the dominant plasticizer used globally in PVC due to its low cost. Phthalates can also be transferred into foods (particularly fatty foods such as cheese and meat) from plastics food wraps and probably printing inks used on wrappers.

According to Phthalates (PAEs) are set of organic compounds extensively used in commerce and industry. These compounds contain polymer addictive which can improve elasticity and smoothness of plastics. In the researcher’s view, this is as a result of the fact that phthalates cannot be chemically bound to plastics effortlessly in natural waters, soils and food products. This result is through direct pollution of plastic packaging to the substance and the environment due to the physical and chemical properties of food ingredients and food contact with the surface area of wrapping materials. Phthalates are generally referred to as Phthalic acid esters (PAEs), used universally as plasticizers to improve the softness and flexibility, which because of its properties with vinyl and polymers generally used in polymeric materials such as polyvinyl chloride (PVC), polyvinyl acetates and polyethylene [1].

Thermoplastics represent around 80% of the world plastics. The most oftentimes utilized for nourishment bundling modernly in China are typically polyvinyl chloride, polystyrene, polyethylene. Phthalates are recognized as man-made substance mixes created to be exploited for generation of plastics, solvents, and individual consideration items. They are typically colorless, odorless, oleaginous fluids that do not evaporate easy and cannot chemically bind to the substance when added. Phthalates belong to the family of highly yielded chemicals widely perceived in environment matrix and human samples. According to Phthalate acid esters (PAEs), dialkyl or alkyl aryl esters of 1,2 benzenedicarboxylic acid, are generally made as plasticizers which results as plastics such as food containers, beverage bottles, and other requirements. Short-chained phthalates (ester side-chain with single to four carbons), with dimethyl phthalate (DMP), diethyl phthalate (DEP), di n butyl phthalate (DnBP) and diisobutyl phthalate (DiBP) are continually applied in the manufacturing of individual care products, pharmaceutical packaging and food . For the time being, di (2 ethylhexyl) phthalate (DEHP) and group of benzyl butyl phthalate (BBzP), two well-known long-chained PAEs (more than five carbons in its side chain), are mostly found in polyvinyl chloride materials, medical devices or building tools. Plasticizers are usually used in polymers with brittleness at room temperature and lower the crystal transformation temperature of the polymer so that the plastic can be used in implementing the required malleability and pliancy as well, such as plastic wrap [2]. Common plasticizers include Bis(2-ethylhexyl) phthalate (DEHP) and Bis(n-butyl) phthalate (DBP) are used together in plastic wraps.

With respect to the high growth in the utilization of bottled water in China within the final decade, there has been a comparable drift watched world. Nevertheless, natural compounds had be identified in bottled water, among which a few estrogenic phthalates have pulled a huge attention considered due to their potential unfavorable impacts on public health.

A lot of attention had also been devoted to the migration of phthalates from plastic bottles under different temperature and storage, in case of water was stored under a monthly minimum sunlight temperature of 14.7 and 28.0 ?, 12.4 and 28.9?, and 12.5 and 30.1C within three years 2007, 2008 and 2009, respectively. However reported that the concentration of daylight plays a vital part in migration of water from plastics because of the degradation degree of phthalates, In addition investigated the migration of 8 PAEs compounds (DMP, DEP, BBP, DEHP, DINP, DIDP and DOP) under various conditions: static and dynamic at for two months evaluated migration using microwave heating to determine three major phthalates under different temperatures. It is still unclear as regards the global situation of phthalates in bottles water. But numerous studies have been conducted on a short-term basis. On the contrary a wide number of studies have suggested that higher pH level is favorable for the movement of phthalates from plastic bottles.

Therefore, we will evaluate the migration of phthalates under different temperatures using heat energy at (40, 60, 80 and 100 degrees) respectively to determine the concentrations of different kinds of phthalate compounds along with migration rate using a gas chromatography mass spectroscopy detector (MSD).

Phthalates tests with >99.4% of purity was gotten as flawless compounds from Shanghai Aladdin Bio-Chem. Innovation co, LTD. Benzene, Dichloromethane and Acetone was provided from Ultrahigh purity Helium (99.999%) were acquired from Tenglong Chemical Industry in China. reagents used in the analysis of phthalates in bottled water and all purchased from Aladdin Chemical Reagent and are of analytical grade.

To extract the vegetable samples some chemicals Di (ethylhexyl) phthalate (DEHP), Diisodecyl phthalates, Dihexylbenzene-1-2-dicarboxylate, Acetone, Dichloromethane, Ethyl acetate and hexane which are purchased as purity grade of reagent and all from Aladdin Chemical Reagent Co.Ltd. N-hexane, Dichloromethane and Acetone was supplied from Ultra-high purity Helium (99.999%) and were purchased from Tenglong Chemical Industry in China.

Some equipment such as Soxhlet extractor, rotatory evaporator and column were used for the extraction and clean up of the vegetable for analysis with a gas chromatography-mass spectroscopy.

Commercially available bottled waters from different chosen companies were bought from Ren Ren le supermarket at Zhangba Dong Lu in China. The water sample from each brand were isolated into three parts. All the bottle water purchased had a 6months duration of storage. The primary set was analyzed quickly after purchase at room temperature. The other two parts were heated at 40? for two days and 60? for three days respectively.

Samples were analyzed using a liquid –liquid extraction of 500mL of water with dichloromethane (2*40mL) for the isolation of phthalates. Sodium anhydrous was included to the combined extracts and concentrated with a rotational evaporator for drying to aid in the collection of a definite volume for testing. The dried residue was dissolved in 50ml of dichloromethane and tested using a gas chromatography- mass spectroscopy for analysis.

The compounds were isolated utilizing the following oven program: the column temperature was first set at 60? for 4minutes, at a point increased to 5 minutes up to 280? which was kept for 10minutes.Helium carrier gas (99.9999% purity) was kept up at a consistent rate of 3 mL/min. The temperature at the injector was 150 ?C. The ion source and transfer line temperature were set at 230?C and at 290 ?C, individually. Mass spectra were gotten utilizing electron impact ionization (70 eV).

For the purpose of determination of phthalates, a standard graph was gotten using a gas chromatography and the type of phthalate tested was 1,2- Benzenedicarboxylic acid which is one of the most commonly found in plastics. Different concentration was determined to produce a straight-line curve [4]. The graph representation showed that the higher the concentration the higher the peak and it was obtained with the same retention time which shows that the sample is a standard sample (Figure 1). 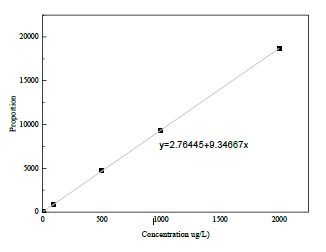 Distilled water was obtained from the Shaanxi normal university laboratory and spiked with about 0.005g of phthalates stored at room temperature and tested using a gas chromatography- mass spectroscopy (Figure 2 and Table 1). 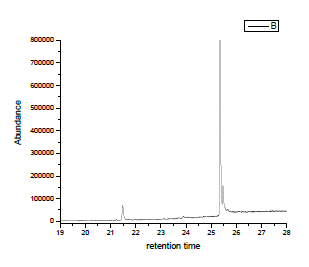 Figure 2: GC-MS chromatograph representation of 0.005g of phthalates in distilled water and shows three peaks with time in minutes and molecular formula displayed in the table below.

Determination of phthalates at 40 degrees

After analyzing 10 samples of bottle water that was gotten from different companies with varying storage time, we observed that at 40 degrees after heating for two days respectively, and tested using a gas chromatography-mass spectroscopy, we obtained several results at approximately the same retention time but the presence of the compound phthalates was absent which indicates that the water is safe for consumption and migration of the phthalates from the bottle to water cannot take place when water is exposed to heat at 40 degrees (Table 2) [5].

A total number 25 bottled water and 4 plastic cups from different companies were assessed and used for the determination of the toxicity, and migration of phthalates (PAEs) in xi’an, China. Liquid-liquid extraction method with dichloromethane was used for the phthalate extraction from water, followed by a drying process using a rotary evaporator. At 60 degrees results showed different types of phthalates at approximately the same retention time and sample 4 had the highest concentration of 0.6848 mg/L Phthalic acid, cyclohexyl hexylester after heating for a period of 3 days, other samples after testing showed some kinds of phthalates that are not usually seen which indicates that the length of storage will give rise to new organic compounds. Also, we checked the migration rate by heating bottled water at 80 degrees and 100 degrees respectively and we discovered that the more the amount of heat the more the effect on the plastic causing more migration into the water and making it not safe. We also observe the presence of this particular kind of phthalates after heating at 80 and 100 degrees. We were also able to determine the mean of five kinds of phthalates that were discovered and that DEHP had the highest concentration of 0.0014mg/L, which means migration rate is a factor for determining the state of water being consumed.

Result showed that DEHP had the highest concentration from the different heating conditions (5.25 × 10-5 at 60 degrees, 2.373 × 10-4 at 80 degrees, and 2.373×10-3 at 100 degrees). Heat and longer time of storage of plastic bottled water increases the migration rate of PAEs into the water, therefore consumers of plastic bottled water should reduce frequent intake under conditions above 40 degrees to avoid chronic toxicity of phthalate esters.

This paper was supported by Analytical department Xi’an shiyou University, Shaanxi China, I am grateful to God for his guidance and our lovely families for their continuous encouragement during my research project. I also want to thank my sponsor Petroleum Technology Development fund for assisting me makes my dreams come true. I also thank my University for providing the samples for analysis.

This work was supported by key research and development Project of Shaanxi Province (2019KW-061), and Open Foundation of Shaanxi Key Laboratory of Lacustrine Shale Gas Accumulation and Exploitation (under planning).