Venkatanarayana B1* and Ratnam CH2

The present study deals with the use of Taguchi approach to optimize the engine performance and emission characteristics of single cylinder DI engine which operates with Karanja oil methyl ester called KOME of 10% blend, 20% blend, 30% blend and 40% blend. As per the DOE, Taguchi L16 orthogonal array was considered. The signal-to-noise (S/N) ratio and the analysis of variance (ANOVA) were exploited to establish the optimal factor levels and to analyze the effect of the significant conditions on performance and emission characteristics. Among all the key engine operating parameters, 5 critical factors were selected which are namely load (L), the percentage of KOME, compression ratio (CR), injection pressure (IP) and injection timing (IT). The confirmative experiment was conducted and tested at the confidence level. Analysis of brake thermal efficiency (BTHE), HC and NOx presented and discussed. The results of this study revealed that BTHE was highly influenced by the percentage of the blend; NOx was influenced by the CR.a

The depletion of fossil fuel invigorates the researchers to identify the suitable alternate for conventional diesel fuel. Biodiesel usage is rapidly increasing in developing countries as the alternative fuel for a diesel engine [1]. An alternative fuel with neat karanja oil is having major problem in diesel engines due to higher viscosity, which is reduced by the transesterification process [2,3]. Karanja methyl ester gives better results on testing on DI diesel engine in order to determine the performance and emissions [4]. The evaluation of performance such bsfc, bthe and emissions such as CO, HC, NOX and Smoke using karanaja methyl ester on single cylinder diesel engine was investigated [5]. Optimization of control factors of a direct injection single cylinder diesel engine with respect to fuel emissions was evaluated [6]. Researchers evaluated that the performance and emissions using the biodiesel blend and operating conditions such as injection pressure, injection timing and compression ratio [7] influence of biodiesel characteristics was investigated [8]. Determination of engine optimum combination of factors using Taguchi approach was investigated [9]. The effect of biofuel blends on bsfc and emissions are evaluated [10]. Controlled factors varied at two levels and the resulting responses of fuel consumption, emissions of HC, NOX and CO were investigated. Bio-ethanol increases the emissions comparatively pure diesel. Investigation process involves three parameters such as blend proportion, injection timing and injection pressure, a simultaneous optimization method called Taguchi was used [11]. Optimization is a technique through which better results are obtained under certain circumstance [12]. The main objective of this work is to study the individual and combined effects of engine operating parameters on the performance and emission characteristics of the diesel engine employing karanja methyl oil ester biodiesel–diesel blend as fuel using Taguchi approach in order to determine the optimal levels of load, percentage of fuel blend, compression ratio, injection pressure and injection timing and optimal values of BTHE, HC, NOx.

The engine was started at first with diesel fuel and warmed up. Then, the same tests were performed with biodiesel blends. Three readings were taken at the conditions of the engine to get an average value. When the engine reaches the steady state working condition, fuel consumption is measured. Fuel consumption measured using with the help of a burette (10 ml in volume) and a stopwatch. The change in compression ratio is obtained by adding a various number of gaskets between the head of the cylinder and the cylinder block, this method may not require major modification in the engine setup. In this experimentation process, the number of gaskets increased to the maximum of four gaskets. Injection timing was varied by the number of shims under the place of the mounting flange of the fuel pump. By adding the shims, the injection time was obtained to retardation. The thickness of one shim, placed between engine and fuel pump, is 0.20 mm and adding or removing one shim changes the IT 2°, This process was repeated for five times to get the correct timings in terms of crank angle. By adjusting the nozzle spring tension leads to obtaining the nozzle opening pressure. Nozzle spring preload is altered by tightening the nut above the spring, therefore the nozzle opening pressure increases.

The performance and emission parameters of biodiesel blends (B10, B20, B30 and B40) were determined. Performance parameters namely brake thermal efficiency (BTE) was computed. Similarly, exhaust emissions like unburned hydrocarbon (HC) and oxides of nitrogen (NOx) were measured.

Design of experiments is a dominant statistical tool for modeling and analyzing the influence of control factors on performance output. The most considerable stage in the design of experiments is selection of the control parameters. An extensive literature review on engine performance and emissions reveal that the parameters such as load, blend, compression ratio and injection pressure and injection time) largely influence the engine performance and emissions characteristics.

Impacts of these five parameters were studied by using an L16 orthogonal array. Processing conditions under which engine was tested are given in Table 1. The five process parameters have four levels. In a full factorial experiment design, it would require 45=1024 combination of runs to study the effect of five parameters each at four levels; Taguchi’s approach is reducing it to only 16 runs, offering a great advantage in terms of experimental cost and time. Experimental observations were further transformed into signal-to-noise (S/N) ratios, which were calculated as a logarithmic transformation of loss function as shown below:

Where n is the number of observations and y is the observed data. Levels of the process parameters used in the experiment were finalized after thorough brainstorming with I.C. Engine experts and automobile manufacturers and same is presented in Table 2. The designed experiments are shown in Table 3 each column represents a process parameter. The engine was tested with 16 different combinations of parameter levels. Each experiment was repeated for three times.

Table 2. Process parameters and their levels. 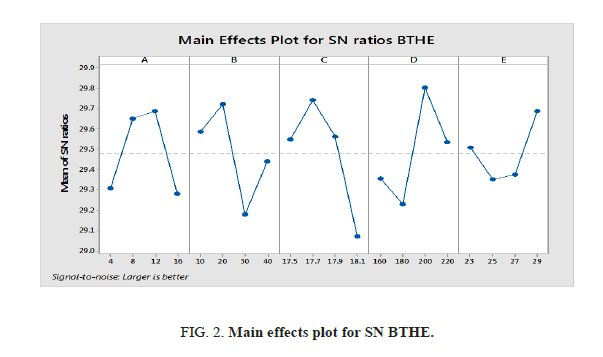 The next step in DOE analysis is determining optimal conditions of the control parameters to give the optimum responses. In this work the response variables to be optimized were brake thermal efficiency (BTHE) has to be maximized and emissions to be reduced as much as possible. Hence the optimum parameter settings will be those that give maximum values of the BTHE and minimum values of HC and NOx.

The optimum settings of the parameters were achieved from the S/N tables of the control parameters. The optimum value of response variable can be predicted using the additivity law:

where T is the overall mean value of the output response variable for the test runs conducted and Xi – the design and control parameter value for the i level of the parameter X. 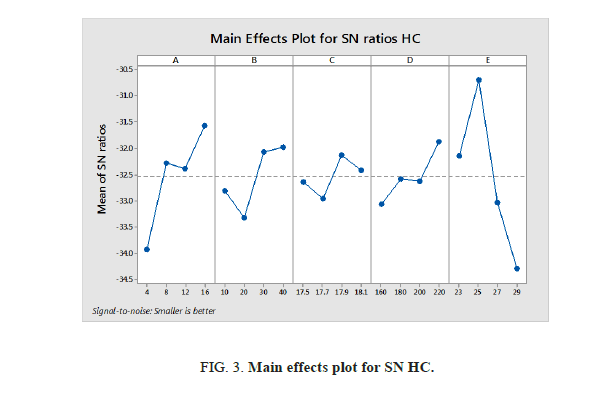 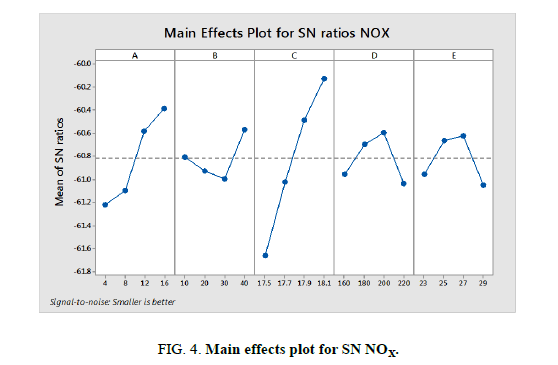 Table 4. Summarized ANOVA for means of responses, F-ratio and PC.