A Novel Corrosion Inhibitor for Improvement of C-Steel Resistance

Corrosion is a common problem encountered in the oil and gas industry, as refineries, pipelines and petrochemical plants suffer considerable corrosion problems. Internal corrosion in industrial equipment is commonly caused by exposure of the surfaces to water, hydrogen sulfide, and carbon dioxide, and also can be provoked by unchecked microbiological activity in the system [1]. The rate of corrosion is mainly governed by the flow management of the multiphase fluids encounter. For example, under lower flowing, decay is observed more commonly, whilst greater flowing indicates flow-accelerated corrosion, as well as erosion-corrosion, may occur. The degree of corrosion observed is generally associated with the amount and nature of the residues present. Low velocity permits residues to settle at the bottom, whereas, flow with greater velocity inclines towards swaying residues away from the pipeline, thus reducing the potential sites for pitting and corrosion [2]. The subject of corrosion, and its elimination, is particularly serious in the oil and gas industries, since the economic damage suffered by these industries, due to corrosion, is especially high [3].

Corrosion due to carbon dioxide has been an acknowledged problem associated with oil and gas manufacture and conveyance for many years [4], as the gas collects in the equipment following ingress. Dry carbon dioxide gas does not contribute to corrosion at the operating temperatures experienced commonly within gas and oil manufacturing systems, but when it subsequently comes into contact with both the aqueous phase and carbon steel, it promotes electrochemical reactions [5]. When dissolved in the water, carbon dioxide forms carbonic acid making the fluid acidic. Thus, corrosion due to carbon dioxide is particularly favored when there is an increase in the hydrogen scale value; at elevated temperatures, a change in the configuration of the aqueous stream, dissociation metal conditions and when acidic phases are present [6,7]. Consequently, it is the predominant form of corrosive attack encountered in gas and oil manufacture [8]. At high temperatures, scoring occurs on the iron carbide gas and oil pipes, which are used for their higher performance, and the metal begins to corrode under these circumstances. Carbon dioxide corrosion can have observed in two based forms: pitting [9] and a form of localized carbon dioxide corrosion under average-flow settings [10].

Of the different approaches used to control corrosion in the gas and oil sectors, the utilization of decaying materials is amongst the most efficient procedures [11,12]. There are many kinds of inhibitors of corrosion, and they are widely classified into cathodic, anodic or mixed corrosion inhibitors. There are also more subtle arrangements based on their chemical structure, with the greatest inhibitors being organic compounds, having one or more polar groups, which may be adsorbed strongly on the surfaces of metals [13-15]. The above inhibitors, which include examples containing moieties incorporating nitrogen (N), phosphorus (P) and/or sulfur (S) atoms, mitigate the response corrosion rate under solution-metal interface lacking the need for complicated measurement of the reaction rate. It is widely considered that organic inhibitors act through adsorption at interface of the solution-metal. The inhibitors decrease the corrosion current and the change in corrosion potential is attained by disrupting the process necessary for electrochemical procedures. The decay initiation on carbon steel under hostile acidic solution has been lengthily evaluated [16-39] and in the other studies, Eucalyptus globulus "Myrtaceae" has been investigated using surface analysis and electrochemical measurements as decay initiator for C38 steel in H2SO4 solution [40]. The inhibition in gas and oil fields is brings an additional level of complexity and needs certain ecological initiators based on the characteristics of implementation, i.e., wells, salvage units, pipelines, factories etc. Destructive compounds, alike H2S, CO2, and acids organic have the potential to deceive the error of initiation in wells [41]. Corrosion inhibition of X-70 pipeline steel in salt water saturated with carbon dioxide at 50°C with carboxyamidoimidazoline has been assessed by using electrochemical techniques [42] for its potential to inhibit the corrosion of C-steel alloy, along with other imidazoline derivatives [43]. The present work studies the inhibitory influence of ditiocarb sodium trihydrate on the corrosion of carbon steel (C-steel), which is used extensively in Iraq's oil equipment, in 0.5 M H2SO4 in dearated and saturated carbon dioxide solutions using electrochemical procedures.

C-steel was used as the working electrode to investigate the corrosion inhibition in dearated (passing N2) and saturated carbon dioxide acidic solution at 298.15 K in both the nonattendance and attendance of ditiocarb sodium trihydrate inhibitor. The chemical compositions of carbon steel obtained from Iraq's oil fields were confirmed by analysis using optical emission spectroscopy (OES) (PMI MASTER Pro 2 Oxford, UK) and the data are shown in Table 1. The samples were cut to dimensions (1 cm × 1 cm and thickness 0.5 cm) and polished to mirror finish by using emery paper and followed by immersion in aqueous alumina suspensions to make the surface very soft. Then, the surface of carbon steel was cleaned using hot benzene (N.B., caution this is a cancer suspect agent) and acetone with distilled water and finally dried by passing a flow of nitrogen gas.

The working C-steel specimen retrieved from carbon steel pipes were covered using epoxy, as to establish a cross-sectional vicinity, 1 cm2, as was under was interaction of the acid compound. A consistent temperature was maintained for all instances, 298.15 K through implementing thermostat bath circulator (ex HYSC company, Korea). All solutions were established freshly using distilled water mixed with sulfuric acid (obtained through Scharlau company). Solutions of 0.5 M H2SO4 were established through mixing of analytical reagent grade 97% H2SO4 in the water.

The electrochemical measurement assortment utilized was a standard five necked Pyrex glass cells (250 ml), housing three-electrodes, including a working electrode (carbon steel), platinum electrode as auxiliary, furthermore a saturated Calomel electrode (Hg | Hg2Cl2 (s) | KCl) as a reference. The remaining two necks, allow the gas to enter and exit. The working electrodes with a square surface of 1 cm2 were held using epoxy resin. The auxiliary electrode constituted a platinum foil and coated with black platinum to increase a large surface area and confer high catalytic activity, constructed the Saturated Calomel electrode constituting a precise Luggin capillary tube placed under vicinity to the functioning electrode surface for the purpose of mitigating Ohmic potential drop (I × R). Then, the working electrode, platinum electrode and cited electrode using precise Luggin capillary were immersed in the saturated carbon dioxide solution and connected by Potentiostat/Galvanostat/ZRA Interface 1000 which obtained from the GAMRY company, USA) for measuring the open circuit potential (OCP) and obtained on the potentiodynamic curves, After that, using an Echem Analyst (version 6.23) to estimate the electrochemical parameters for Tafel polarization curves at a polarizing value ± 100 mV under respect towards free corrosion potential.

The variation of open circuit potential (OCP) against time provides an idea of cathodic and anodic procedures of corrosion reaction [44]. Fluctuation of OCP as a task of immersion time has to potential to be used as display the development processes of the shielding films [45], i.e., the open circuit potential is the steady state potential at which a carbon steel equilibrates in a given test solution and there is no external source polarizing or shifting the potential from the equilibrium value. The study was performed by immersing the carbon steel in deaerated or in carbon dioxide 0.5 M sulfuric acid solution and measuring the potential with time. The OCP was estimated when the potential becomes constant with respect to time [46]. The changes in OCP of carbon steel under nonattendance as well as attendance of various concentrations (1 × 10-4 M to 3 × 10-3 M) of ditiocarb sodium trihydrate inhibitor in saturated CO2 0.5 M H2SO4 and deaerated at 298.15 K are show in Figure. 2 and 3, respectively.

From the open circuit, potential curves shown in Figure. 2 and 3, it can been seen that the stable position was achieved under ten minutes introduction of carbon steel into the compound. In the absence of the ditiocarb sodium trihydrate inhibitor, the OCP drifts towards the noble direction during the initial 400s of immersion. Lacking ditiocarb sodium trihydrate, potential of the opened circuit turns negative given the dissolution of air that was present on the carbon steel prior to introduction into the compound [47]. Subsequently, an intermediate stage of the potential is observed in the range from -580.0 mV to -590.0 mV in saturated carbon dioxide and 525.0 mV to -530.0 mV in deaerated 0.5 M H2SO4 solution with respect to the saturated Calomel electrode then unit steady state. This disparity of OCP with time reveals the corrosivity of the sulfuric acid on the C-steel electrode. This indication explains passing in a potential of high frequency and low intensity, with an increase in their intensity towards the cathode direction, and the slow decay towards the anodic direction, in the special case of the material suffering from pitting corrosion [48,49]. If the anodic process of the corrosion process includes CO2 corrosion in solution and pitting corrosion in deaerated solution, then a starting period can be anticipated prior to formation of the pit, therefore the first property of the potential turns positive of the pitting overall potential, follow that the OCP turns further in decline [50]. This observation indicates that in the absence of inhibitor the OCP of the saturated carbon dioxide is lower than in deaerated 0.5 M H2SO4 solution. Simultaneously, a progress in the value of the potential creates an increment in the rate of corrosion alongside fastened development of the film. 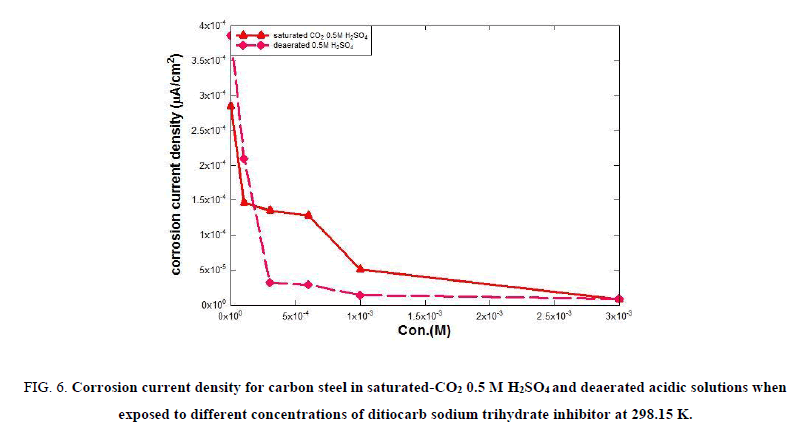 It has been stated that if the dislocation in Ecorr in the presence of inhibitor is greater than ± 85 mV when compared with Ecorr in the absence of inhibitor, then the inhibitor could be assessed as a property cathodic or anodic variation [56-58]. Under the current research, though a slight nonconformity in Ecorr is observed, the average dislocation is lower to 85 mV, indicating that ditiocarb sodium trihydrate could be a mixed-type inhibitor. The corrosion potential Ecorr values shifted towards the direction of slightly more progressive properties, and such conclusion recommends that anodic and the hydrogen evolution reactions are promoted; hence the ditiocarb sodium trihydrate inhibitor might be classified as mixed-type inhibitor [59]. The anodic Tafel slopes (βa) and the cathodic Tafel slopes (βc) are nearly slight altered upon addition of ditiocarb sodium trihydrate inhibitor and are somewhat greater than that predicted for H2 evolution according to the Volmer-Tafel mechanism [60]. The vicissitudes in either the anodic and cathodic Tafel slopes detected on introduction of ditiocarb sodium trihydrate inhibitor suggests that both responses are mitigated [61]. This can be interpreted by considering that the C-steel electrode is covered with iron oxide and the presence of the oxide film can evidently affect the surface reduction process, by forcing a barrier to undergo charge transfer through the oxide film. Thus, the values of the anodic Tafel slopes (βa) and the cathodic Tafel slopes (βc) are nearly equal in uninhibited and inhibited solutions. This explains that the inhibitor molecules might be adsorbed on the C-steel surface electrode and obstructive the reaction corrosion sites of the carbon steel surface lacking any influence on the anodic response instrument [62,63].

The inhibition efficiency may be calculated using the following equation (1) [64]:

Where (icorr)uninh and (icorr)inh are the uninhibited and inhibited corrosion current densities. The inhibition efficiency and corrosion rate values which are parameters derived from the output of the Echem analyst program for analysis potentiodynamic scan are given in Tables 4 and 5. 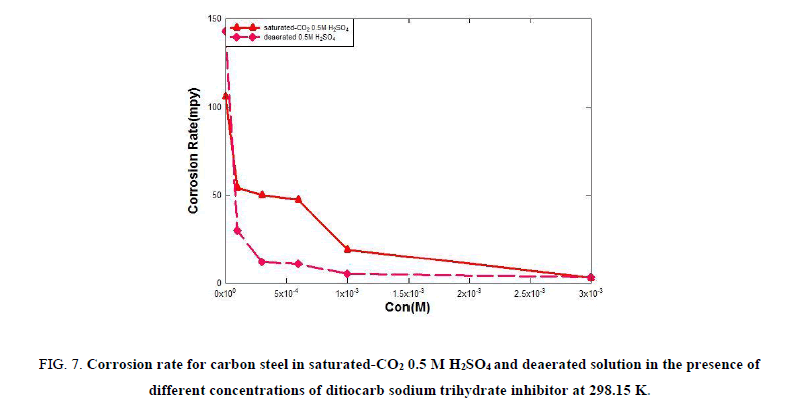 Figure 7: Corrosion rate for carbon steel in saturated-CO2 0.5 M H2SO4 and deaerated solution in the presence of different concentrations of ditiocarb sodium trihydrate inhibitor at 298.15 K. 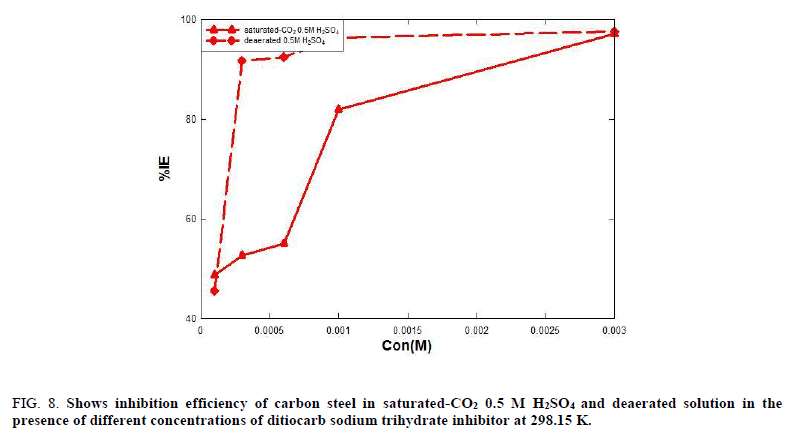 The inhibition efficiency increased with increasing of ditiocarb sodium trihydrate inhibitor concentration even up 97.20% at (1 × 10-3 M) as show Figure. 4.

Firstly, the mechanism of electrochemical cathodic reaction in saturated-CO2 acidic medium [65-69] clarified in the following equations:

The overall of electrochemical reaction in carbon dioxide corrosion is explained in equation (7).

Conversely, the electrochemical reaction of carbon steel in deaerated acidic medium explained in shown in equations (8) and (9) [68-70].

1. After C-Steel is immersed in the acidic solution, the ditiocarb sodium trihydrate (Na-DDC) complexes diffuse from the bulk of the solution towards the metal surface.

The released Na+ ions may combine with

on the cathodic site.