The present study compares the oxygen reduction reaction (ORR) performance for iron-nitrogen coordinated catalysts supported on carbon (FeNC) in acidic and alkaline electrolytes. The ORR activity of the synthesized FeNC materials was found to be significantly lower than state of the art platinum supported on carbon (Pt/C) in acidic medium. On the other hand, similar ORR activity for the two samples was observed in 0.1 M KOH. In addition, FeNC catalysts demonstrated much higher stability in alkaline medium relative to that in acidic electrolyte. These results demonstrate promise of FeNC materials as promising cathode catalysts for anion exchange membrane (AEM) fuel cells.

Fuel cells are devices that convert chemical energy into electrical energy in an efficient and sustainable manner. Of particular interest are the low temperature fuel cells namely proton exchange membrane (PEM) and anion exchange membrane (AEM) fuel cells due to their relatively higher energy densities and higher efficiencies. The two types primarily differ in the sense that it is H+ ions that are transported through the membrane in the former whereas it is OH- ions in the latter. One of the major limitations in the large scale commercialization of these fuel cells is offered by sluggish kinetics of oxygen reduction reaction (ORR) occurring at the cathode. Platinum-based catalysts typically used to catalyze ORR are expensive and available in limited quantities. Consequently, there has been a significant research activity on development of low-cost Pt-free electrocatalyst materials for ORR. In particular, carbon-based catalysts are promising alternatives to Pt [1-11]. However, the ORR performance of such materials still needs significant improvement. In addition, stability continues to remain a major concern in acidic electrolyte. This degradation has been attributed to dissolution of the metal, hydrogen peroxide formation through an indirect reduction of oxygen, corrosion of the carbon support [12-15] and protonation of pyridinic-N species on the surface [16,17]. On the other hand, AEM fuel cells offer several advantages over their acidic counterparts. These advantages include facile oxygen reduction reaction (ORR) kinetics, fuel flexibility and absence of a corrosive acidic environment [18,19].

Iron-nitrogen coordinated catalysts supported on carbon (FeNC) are currently considered as the most active Pt-free electrocatalysts for ORR and consequently have been extensively studied in literature [2,5,9,14,20-33]. However, their ORR performance has not been systematically compared in acidic and alkaline electrolytes. Additionally, there is limited information on their durability characteristics in the two media. With this motivation, we have systematically studied the performance of iron-nitrogen coordinated catalysts supported on carbon (FeNC) in acidic and alkaline electrolytes. Comparison with state of the art platinum supported on carbon (Pt/C) is also presented. Electrochemical half-cell measurements suggest high activity and good stability for FeNC materials in 0.1 M KOH demonstrating their promise as cathode catalysts for AEM fuel cells.

N-coordinated iron-carbon (FeNC) catalysts were synthesized according to the procedure described in literature [2]. Briefly, 500 mg of phenanthroline dissolved in a 1:2 ratio by volume of ethanol: water was mixed with 31.2 mg of iron (II) acetate. When a deep red color, indicative of the formation of [Fe(phen)3]2+ complex was observed, 500 mg of Black Pearls 2000 was added to obtain a nominal Fe loading of 1%. This mixture was stirred in a water bath at 70°C until the solution volume was reduced to one third of the original volume and then kept overnight in the oven. The resulting material was then ball-milled at 200 rpm for 3 h using a rotary ball-mill. The ball-milled precursor underwent through two pyrolysis steps, first in argon at 1050°C for 1 h and then in ammonia at 950°C for 20 min. 20% Pt/C (BASF) was used as received as the state of the art catalyst material for comparison.

Oxygen reduction reaction (ORR) activity was measured in a standard three-electrode system comprising of a working electrode (glassy carbon disk, 5.61 mm and 0.2472 cm2), a hydrogen reference electrode (ET070 Hydroflex) and a counter electrode (Pt coil). The electrolyte used was either 0.5 M H2SO4 or 0.1 M KOH. To prepare the FeNC catalyst ink, 95 μL of 5 wt% Nafion® solution and 350 μL ethanol (200 proof) were added to 10 mg of catalyst weighed in a 2 mL vial. The vial was then kept for ultrasonication in an ice bath until the catalyst was well-dispersed. A 9 μL aliquot of the ink was then pipetted onto the glassy carbon disk which corresponded to a catalyst loading of about 800 μg/cm2.

The catalyst ink preparation procedure was similar for Pt/C and the catalyst loading (including the mass of carbon) was about 200 μg/cm2geometric for Pt/C.

ORR performance was evaluated by comparing (1) potential at a background-subtracted current density of -0.1 mA/cm2 and (2) half-wave potential (E1/2)

In-addition, Tafel analysis was performed to gain insights into the rate-determining step for ORR using eqn. 1.

Where V0 is the equilibrium potential (1.23 V), b is the Tafel slope and i0 is the exchange current density.

Where i is the measured current density,

and ilim is the limiting current density

The selectivity towards water formation was assessed using rotating ring disk electrode (RRDE) experiments. Here, the Pt-ring surrounding the glassy carbon disk was held at a constant potential whereas the disk was scanned. This allowed detection of the peroxide intermediate formed on the disc during ORR. The amount of peroxide radical was calculated using eqn. (3).

IR is the ring current and

N is the collection efficiency (37% as specified by the manufacturer).

The ORR stability was evaluated by cycling the catalyst-coated electrode from 1.2 V to 0.0 V to 1.2 V. Oxygen was continuously bubbled into the electrolyte and the electrode was rotated at 1000 rpm while cycling was performed at 100 mV/s. ORR activity was measured again after 100 and 500 cycles.

All potentials referred to in this work are referenced with respect to a reversible hydrogen electrode (RHE) scale.

The ORR activity for FeNC catalyst as well as that for commercial Pt/C sample was measured in 0.5 M H2SO4. Results are presented in Figure 1. As evident from Figure 1, FeNC showed significantly lower ORR activity relative to that for Pt/C. The onset potential and half-wave potential (E1/2) values for FeNC were lower than those for Pt/C by 50 mV and 40 mV, respectively (Table 1). These results were in sharp contrast to those in 0.1 M KOH (Figure 2). Very similar ORR activity was noted for Pt/C and FeNC (Figure 2a). The onset potential and E1/2 values for the two samples differed by less than 10 mV (Table 1). In-addition, the amount of peroxide formed for FeNC was also somewhat higher relative to that for Pt/C especially at lower potentials (Figure 2b) suggesting higher selectivity of the former towards water reduction. 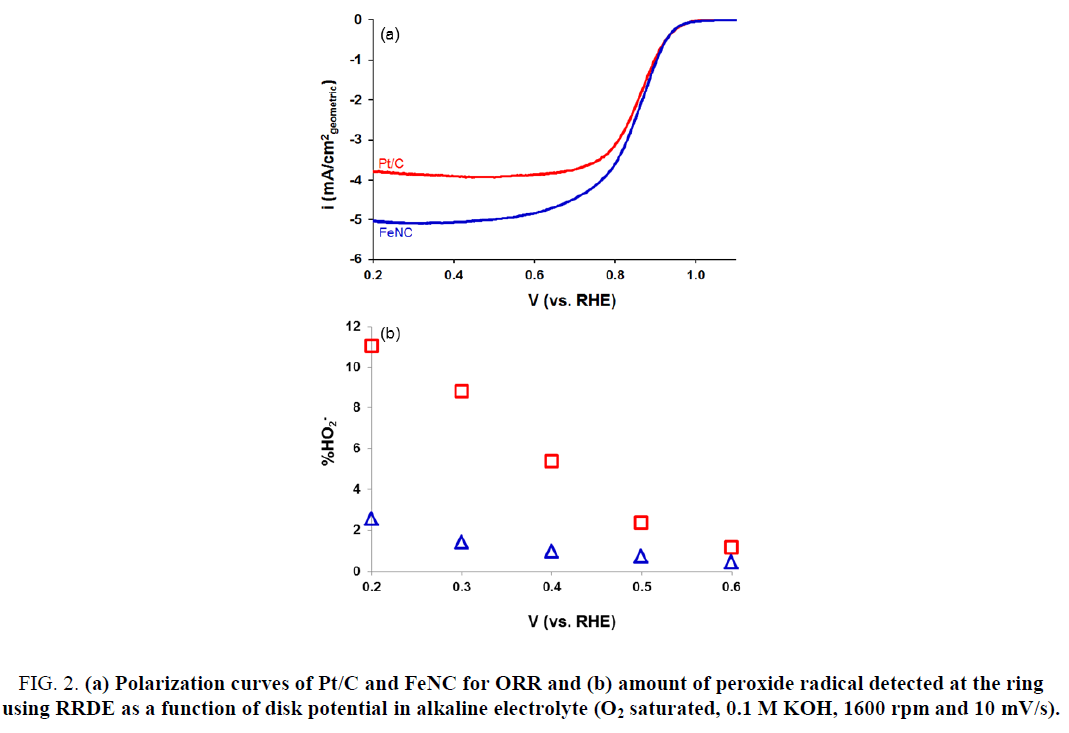 Figure 2: (a) Polarization curves of Pt/C and FeNC for ORR and (b) amount of peroxide radical detected at the ring using RRDE as a function of disk potential in alkaline electrolyte (O2 saturated, 0.1 M KOH, 1600 rpm and 10 mV/s).

Table 1: Comparison of ORR kinetic parameters for Pt/C and FeNC in acidic and alkaline electrolytes.

To gain insights into the rate determining step for ORR, mass transport-corrected Tafel plots were used. These plots for FeNC and Pt/C in H2SO4 and KOH electrolytes are shown in Figure 3a and 3b respectively. An interesting comparison can be made between acidic and alkaline media Tafel slopes: Significant difference in Tafel slopes for FeNC and Pt/C in acidic medium (65 vs. 93 mV/dec) was noted unlike that in alkaline electrolyte (63 vs. 71 mV/dec). Similar Tafel slopes in the latter case suggest a similar rate determining step for ORR in case of Pt/C and FeNC. 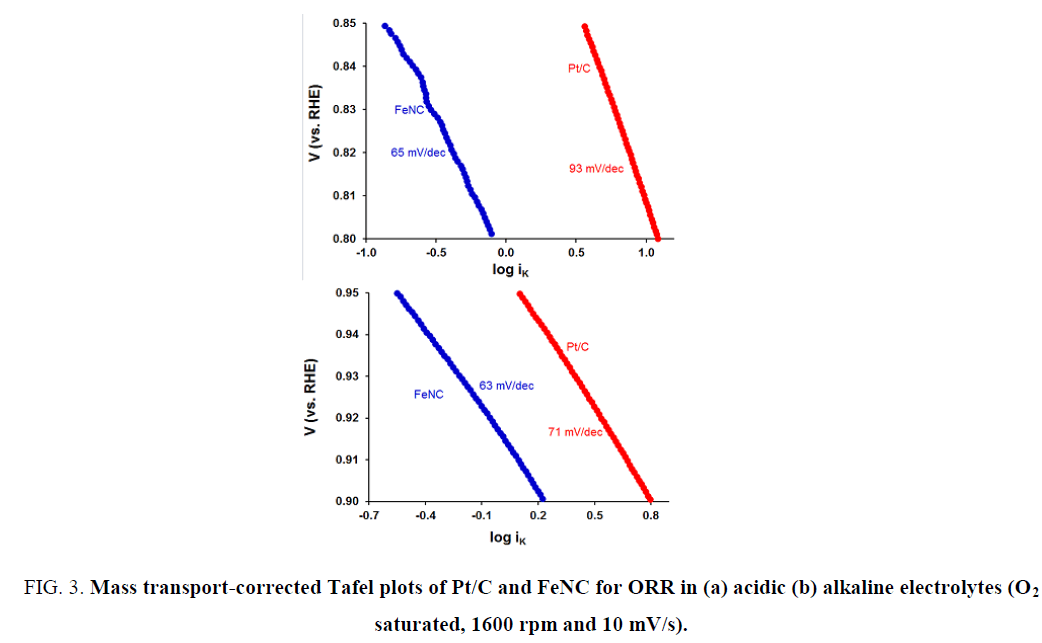 Figure 3: Mass transport-corrected Tafel plots of Pt/C and FeNC for ORR in (a) acidic (b) alkaline electrolytes (O2 saturated, 1600 rpm and 10 mV/s).

Accelerated Durability Tests (ADTs) were also performed to evaluate the stability of FeNC catalysts in acidic and alkaline electrolytes. This was accomplished by cycling the catalyst-coated disk electrode between 1.2 V and 0 V at a fast rate in an oxygen saturated acidic or alkaline electrolyte. Results are presented in Figure 4. A steady decrease in the ORR activity for FeNC was observed with continued cycling in 0.5 M H2SO4 electrolyte (Figure 4a). Figure 5 represents the change in ORR activity with cycling for the two electrolytes. The onset potential and E1/2 decreased by 30 mV after 500 cycles (Figure 5a and 5b). This loss in activity most likely stems from dissolution of iron and carbon corrosion of the support in the acidic electrolyte. On the other hand, no noticeable change in activity was observed in KOH electrolyte (Figure 4b). The onset potential and E1/2 values obtained after 500 cycles were similar to those before any cycling (Figure 5c and 5d). Thus, the results presented here demonstrate the promise of FeNC catalysts as efficient ORR electrocatalysts for anion exchange membrane (AEM) fuel cells. 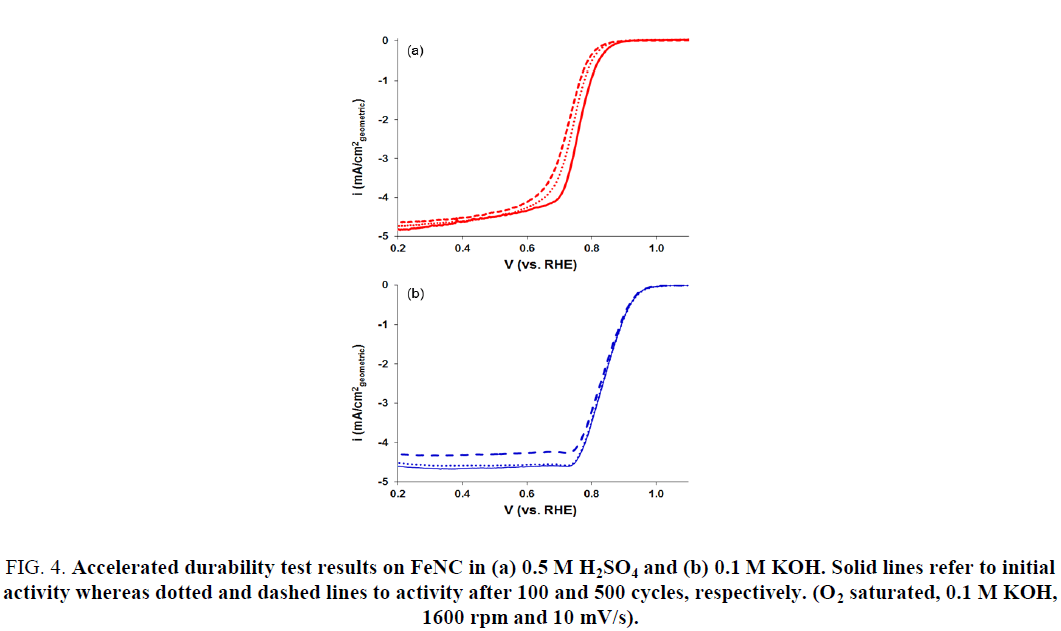 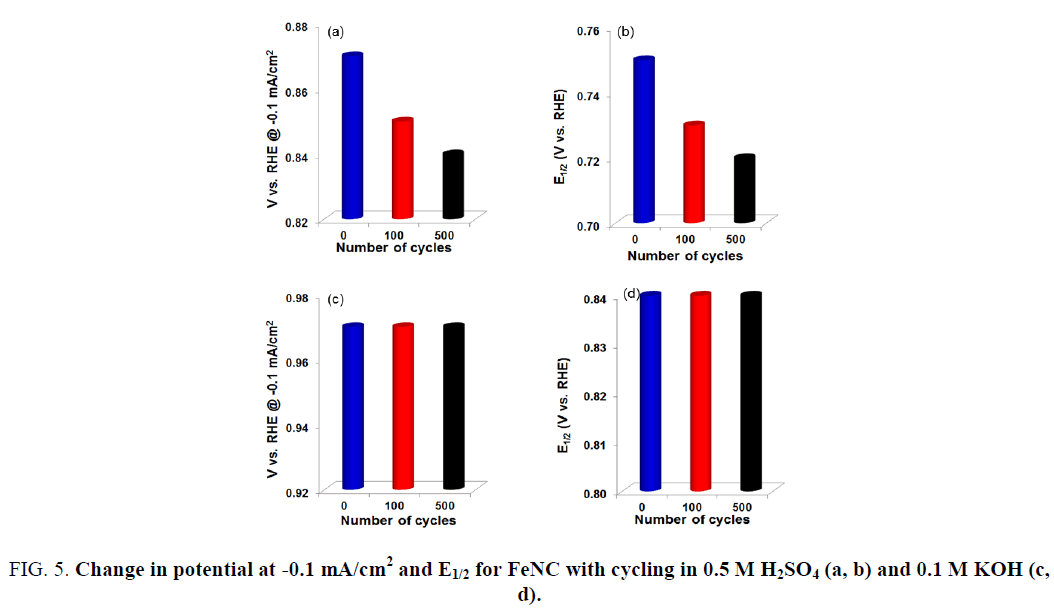 This material is based upon work supported by the U.S. Department of Energy, Office of Science, Office of Basic Energy Sciences under Award Number DE-FG02-07ER15896. We would also like to thank Ohio Coal Research Consortium for their financial support under Subcontract No. OCRC-C-04. 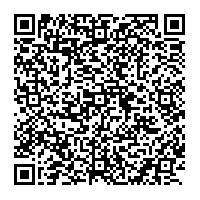