Utility of Brominating Agent and Methyl Orange for Spectrophotometric Determination of Almotriptan in Pharmaceutical Tablets; Applying of Content Uniformity Measurement

A simple, sensitive, specific, rapid and accurate Spectrophotometric assay was described for detection of almotriptan malate (ALM) in pure and pharmaceutical preparation using in situ generated bromine as oxidizing agent, in acid medium, and methyl orange as chromogenic agent. Almotriptan malate is reacted with known amount of bromine and residual unreacted bromine was detected by reacting with amount of methyl orange then determining absorbance at 509 nm. The content of bromine reacted corresponds to the amount of drug. Beer's law is good through a concentration range of 3- 17 μg/ml. LOD is 0.59 ug/mL and LOQ is 1.78 ug/mL. assay has been satisfactory applied to detection of cited drug in bulk, pharmaceutical preparation and content uniformity measurement. Results have been compared statistically with reference assay.

Migraine attacks can cause significant pain for hours to days and can be so severe that the pain is disabling. Warning symptoms known as aura may occur before or with the headache. These can include flashes of light, blind spots, or tingling on one side of the face or in your arm or leg. Almotriptan malate (ALM), chemically known as 1- [({3- [2(dimethylamino) ethyl] indol-5-yl} methyl) sulfonyl] pyrrolidine malate (Figure 1), is Serotonin agonist. It is apply for the acute treatment of migraine attacks [1]. Different analytical measurements were reported for detection of cited drug. These methods include spectrofluorimetry spectrophotometry HPLC and thin-layer chromatography. The present study used to find simple and sensitive and specific assay to detection of ALM in pure and in pharmaceutical preparation using spectrophotometric assay. The method utilize in situ generated bromine as oxidizing agent and methyl orange, that were successfully apply to the sensitive spectrophotometric detection of a lot bioactive substances [2-4]. The suggested assay is simple, accurate and precise. 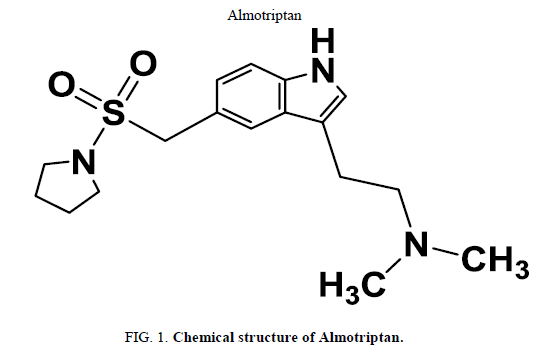 The suggested assay has been fully validated according to ICH guidelines; in addition, it was applied to content uniformity measurement of the cited drug preparation through USP guidelines [5-7].

• Diluting to 100 mL in a calibrated flask. It has been diluted to obtain the required concentration (50 ug/mL), stable for 2 weeks at least.

Weight 10 mg of almotriptan malate and transferred to a 100 mL volumetric flask. Drug has been dissolved in double distilled water and diluted to the mark with the distilled water to reach a stock solution of 100 ug/ml.

Accurately measured of almotriptan malate has been transferred to a series of 10.0 mL calibrated flasks so that the final concentrations were in the range of (3-17 ug/mL). To each flask 1 mL of 5 M HCl followed by 1.3 mL of bromate-bromide mixture were added. The content has been mixed very well and the flasks have been set aside for 20 min with vigorous shaking. Finally, 2 mL of methyl orange has been added to each flask, complete each flask with double distilled water and measure absorbance at 509 nm.

20.0 tablets of almotriptan malate were weighted accurately, then ground in a mortar and mixed very well. An accurately weighed of tablets equivalent to 10 mg of almotriptan malate has been transferred to a 100 mL calibrated flask and about 80.0 mL of double distilled water has been added. The contents of the flask has been sonicated for 20.0 minutes, completed with double distilled water and then filtered. The first portion of the filtrate was rejected. Aliquots of these solutions has been transferred to a series of 10.0 mL calibrated flasks to reach sample, (3-17ug) and procedure has been take place as previously mentioned.

The suggested method is indirect determination of ALM and it depends on the detection of the excess bromine (in situ generated) after allowing the reaction between (ALM) and a measured amount of bromine to be taken place. The residual bromine has been detected through reaction with methyl orange. The method depends on bleaching action of bromine on methyl orange, the bleaching caused by the oxidation of dye. ALM, when added in excess amounts to a determined amount of in situ generated bromine, consumes the latter proportionally and there lead to decrease in the amount of bromine. When a determined amount of methyl orange was added to decreasing amounts of bromine, a concomitant increase in the concentration of methyl orange take place, consequently a proportional increase in the absorbance at the respective λmax=509 nm was appeared with increasing concentration of ALM. As a consequence, we aimed to use this absorption band of ALM, to explore a new methodology for its analysis in its tablets. A lot of experimental factors affecting the absorbance intensities of ALM have been carefully optimized. Such conditions have been changed individually, where others kept constant.

Absorption spectrum for detection of ALM has been observed through the range of 200 - 800 nm. After oxidation of almotriptan malate and portion of dye with bromine, excess unoxidized amount of dye is absorbed at 509 nm (Figure 2).

Type of different acids: Different acids have been checked as a medium for bromine generation including H2SO4, HCl, HNO3 and H3PO4. HCl was found the most suitable aid that gives the most accurate results. So, 5M hydrochloric acid has been used through the procedure (Figure 3).

Figure 3: Effect of bromate-bromide mixture on the absorbance of methyl orange (5 μg ml-1) at a fixed amount of 5 M HCL.

Volume of bromate –bromide mixture: It has been found that 1.3 mL of bromine is sufficient for its discoloration. Action of dye 50 ug/mL (Figure 5).

Time of reaction: The reaction between ALM and in situ bromine was completed at room temperature (25 ± 5°C) within 20 min. A time span of 2 to 5 min for the reaction between unreacted bromine and methyl orange in the second step give the maximum absorbance. The contact time of 25 min or 20 min is not critical and any delay up to 30.0 min in that assay was no effect on the absorbance. The measured color in that method has been still for two hours even in the presence of reaction product shown in Scheeme 1. 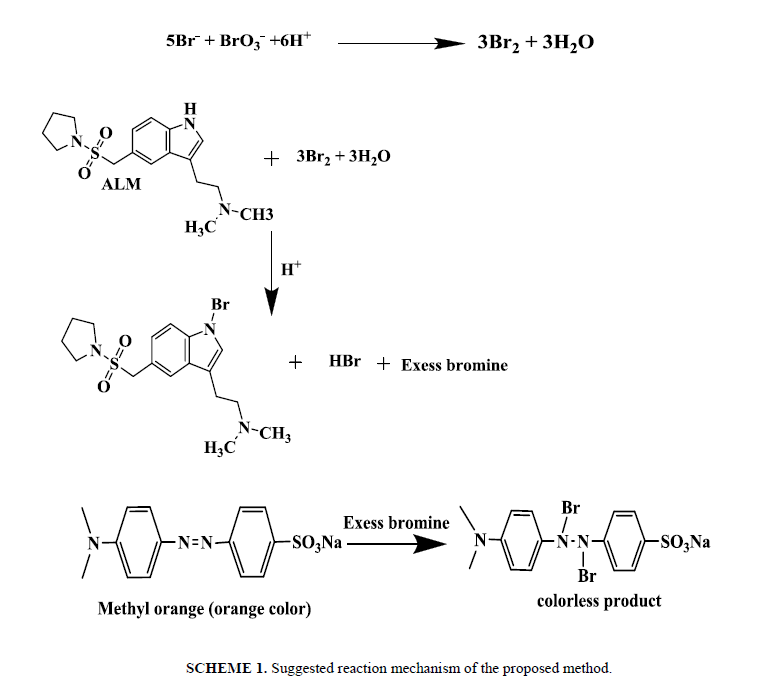 Validation of the suggested assay: The validity of an analytical assay was verified by laboratory studies to prove that the performance characteristics of the assay have the requirements for the intended analytical applications [9].

Range and linearity: The linearity is defined as its ability to elicit test results directly proportional to the concentration of the drug. Under the optimized conditions, standard calibration graphs for the investigated drug was constructed by analyzing a series of eight concentrations of ALM, taking the mean of three determinations for each concentration, and then plotting the absorbance versus the concentration, Then test results should be treated statistically by calculation of a regression equation by least squares method [10]. In this work, concentrations ranging from 3.0 – 17.0 μg/mL have been studied for the Cited drug and the whole set of validation experiments have been occurring through that range to ensure the validation of the suggested assay (Table 1).

Table 1. Analytical parameters for the analysis of the studied drug with bromometric method.

Accuracy and precision: Table 2 showed the close agreement between the measured and true values give good accuracy of the proposed method. Intraday and Interday precision were assessed using three concentration and six replicates of each concentration The calculated relative standard deviation values were below 2% which is very small and give good repeatability and reliability of the proposed method (Table 3).

Table 2. Evaluation of the accuracy of the proposed bromometric method.

Table 3. Evaluation of intraday and Interday precision of the proposed bromometric method.

Limit of detection (LOD) and limit of quantitation (LOQ): The have been calculated according to ICH Q2 Recommendation through the equations:-

Robustness of the suggested assay: It has been checked against small variations in the experimental factors such as volume of acid (1 ± 0.1 mL), volume of bromate –bromide mixture (1.3 ± 0.2), Volume of dye (2 ± 0.2 mL) and time before addition of dye (20 ± 5 min). In these experiments, one experimental parameter was changed while the other parameters were kept unchanged and the recovery percentage was calculated each time. The obtained recoveries and standard deviations indicated that small variations in any of these variables did not significantly affect the results of the proposed procedure (Table 4).

Table 4. Comparison between the proposed method and the reported method for determination of ALM in its pharmaceutical dosage form.

Application to pharmaceutical preparation: The results obtained have been compared with the reported method using student's t-test and the variance ratio F-test at 95% confidence level. No significant difference was found between the results obtained by both methods (Table 5). This finding indicated high accuracy and precision in the detection of the cited drug in its pharmaceutical preparation [14-16].

Assay of content uniformity: 10.0 tablets have been assayed by the same experiment used for the assay of almotriptan malate in pharmaceutical preparation. The content uniformity has been Tested by using the United States pharmacopeia guidelines [17-19]. Acceptance value (AV) has been calculated and it has been found to be smaller than the maximum allowed acceptance value (L1).

In this work, spectrophotometric assay was described for determination of Almotriptan malate in pure and tablet using in situ generated bromine as oxidizing agent and methyl orange as chromogenic agents. Assay was validated according ICH guidelines. Suggested assay can be occurring at room temperature. Thus, the assay useful for the quality control and routine analysis of cited drug in pharmaceuticals, since there is no interference from excipients that might be found in commercial formulation.