1Department of Chemistry and Chemical engineering, Malek-e-Ashtar University of Technology

2Department of Chemistry and Chemical engineering, Institute for Color Science and Technology

3Department of Material Science and Engineering, Sharif University of Technology

In recent years the Cu-Cr-O composites are found great promising in application as burning rate catalysts (ballistic modifier) for solid propellants used in defence (high explosives, ballistic missiles) and space vehicles (rocket propellants). Solid composite propellants are mixtures of pre polymer (binder), aluminium fuel, oxidizer salts (e.g. ammonium perchlorate), and other components, including curatives, plasticizers, bonding agents, stabilizers and catalysts. Even though added a few percent of the propellant binder, the catalysts used to control the burn rate are of high importance, since they allow improving the ballistics of rockets [1]. Combustion of this system involves the decomposition of AP (ammonium perchlorate) and the binder and mixing and oxidation-reduction of the decomposition products. Cu-Cr-O composite oxides via thermal decomposition of copper ammonium chromate and found that the propellant burning rate is enhanced by the addition of Cu-Cr-O composite oxides.

Cu-Cr-O nanocomposites as additives for the catalytic combustion of AP-based solid-state propellants, synthesized via a citric acid (CA) complexing approach. They showed that well crystallized Cu-Cr-O nanocomposites could be produced after the CA-Cu-Cr precursors are calcined at 500°C for 3 hrs. Addition of the as synthesized Cu-Cr-O nanocomposites as catalysts enhances the burning rate as well as lowers the pressure exponent of the AP-based solid-state propellants considerably. Noticeably, catalyst with a Cu/Cr molar ratio of 0.7 exhibited promising catalytic activity with high burning rate and low pressure exponent at all pressures, due to the effective phase interaction between the spinel CuCr2O4 and delafossite CuCrO2 contained in the as-synthesized Cu-Cr-O nanocomposites. synthesized p-type nano-CuO and CuCr2O4 by an electrochemical method and investigated the catalytic effect on the thermal decomposition behavior of ammonium perchlorate (AP) as a function of catalyst concentration using differential scanning calorimetry. The nano copper chromite (CuCr2O4) showed best catalytic effects as compared to nano-cupric oxide (CuO) in lowering the high temperature decomposition by 118°C at 2 wt.%. They observed high heat released of 5.430 and 3.921 kJ g-1 in the presence of nano-CuO and CuCr2O4, respectively. The decrease in the activation energy and the increase in the rate constant for both the oxides confirmed the enhancement in catalytic activity of AP. They proposed a mechanism based on an electron transfer process for AP in the presence of nanometal oxides.

By this method, Cu and Potassium dichromate with Ammoniac and deionized water mixed with specific ratio (determines the particle size of final Chromite) then dried the outcome precipitate in 110°C and 500°C for twice finally, Cu-Chromite produces

Cu-Cr-O nanocomposites by citric acid (CA) complexing approach in which 0.01 mol Cu(NO3)2 and 0.02 mol Cr(NO3)3 are dissolved in 100 mL deionized water to obtain a mixed metal nitrate solution. Then citric acid is added to this solution and the molar ratio of citric acid to the total metal ions is fixed to be 2:1. After stirring for 30 min, the solution is heated at 95°C for several hours to evaporate the water solvent to produce dark brown transparent viscous gels. The gels are then dried at 160°C for 2 hrs to obtain the foamy dark powders, which are denoted as precursors of Cu-Cr-O Nano composites (CA-Cu- Cr). After grinding, the precursors are successively heated at 600°C for 3 h to obtain the final black Cu-Cr- O Nano composites [3].

Results shows that produced Citrate gel from metal Nitrates and Citric acid goes through self-burning. By heating, bright points appear. This process studied by thermal analysis. (Figure. 1) shows that in DTA diagram, exothermic reaction acts Scanning Electron Microscope system and Nitrate [4]. Diagram TG also shows that decomposition of gel occurs suddenly and randomly. In this temperature (237°C) gel begins to burn . Weight loss of gel is about 80% that occurs with self-burning. This weight loss is because of removing water vapor, carbon dioxide and nitrogen oxide. 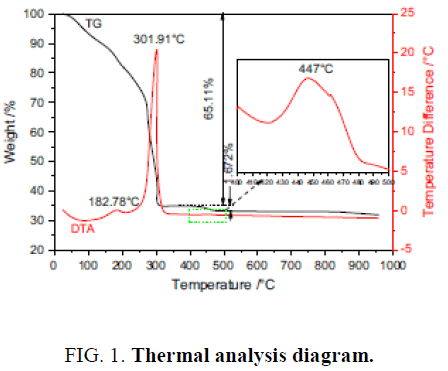 Figure. 2 shows that ash produces as result of drying in 160°C then calcination in 600°C, includes different oxides of Cu and Cr compounds in Figure. 2, also Figure. 3 shows nano particle sizes which measured with SEM. FT-IR spectrum of produced particles shows some peaks in 524 cm-1 563 cm-1 and 611 cm-1,, represents bending vibrations of Chromite anion (Cr2O4) in solid phase (CuO.CuCr2O4) (Figure. 4). The peak of 1637 cm-1 is for CuO vibrations. Existing solid phase (CuO.CuCr2O4) can proved by spectrum data [5]. Reported studies compatibility the empirical data with FT-IR spectrums by Miller and Willkins for mineral on ions. 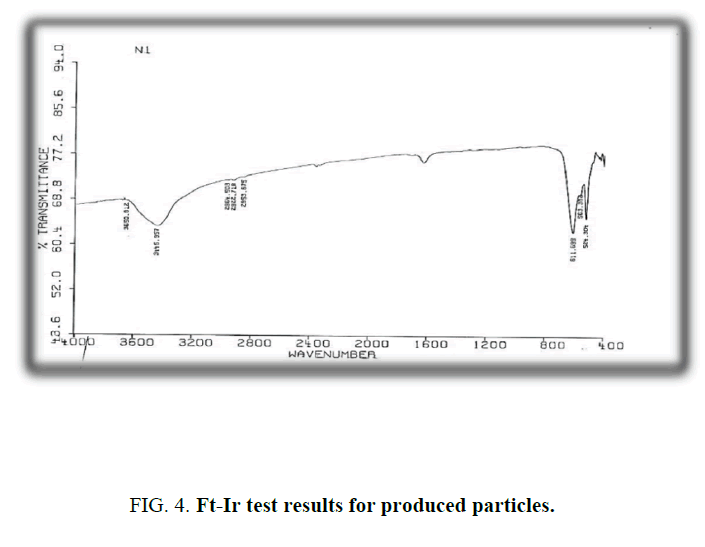 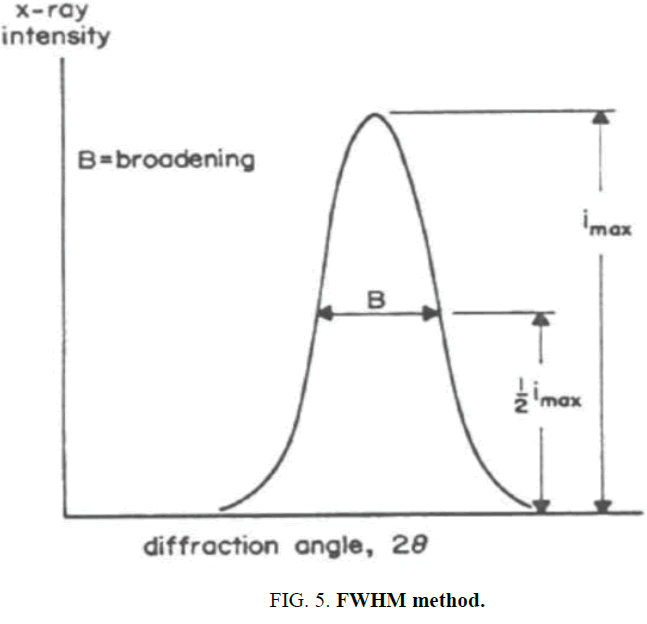 TABLE 1: Shows the FWHM details, by substituting values in formula of FWHM, the mean particle size is 47nm. For studying PH effect in synthesis process of Cu-Chromite nano catalyzer, all of last studied method include metal percentage, amount of used Citric acid and drying and calcinating method (environmental conditions) are used and Ammonium solution of 0.1 molar used for controlling PH values. In this step, values of PH set to 3.32 (that is equal to PH of sample without adding Ammonium solution), 5, 7 and 9. TABLE 2 shows the synthesized samples.

Effect of PH is because of formation of complex of metals and Citrate ion. Actually Citrate ion produces metal citrate complex in solution with free hydrolyzed metals. Synthesizing complex cause of sol to gel transferring. Synthesis this complex is strongly dependent of PH value that can observe by changing the color of synthesized complex in different PH values. For example, the color of complex in PH of 5 is black and is brown for PH of 7. Changing color is because of difference of synthesized Citrate complex [7]. Type of synthesized complex, stable ability amount and thermal decomposition method are effective in phase of solid produced. In different PHs, a synthesis different metal complex that leads to different solid phases by later steps of drying and calcination that by reducing water and other materials. The mean of crystalline dimensions of Cu-Chromite powder calculated by Debby- Scherer relation in PH of 9 is about 85 nm. Results shows that by determining a specific PH could specify the desired type of solid-phase catalysts (FIG. 7a – FIG. 7d). 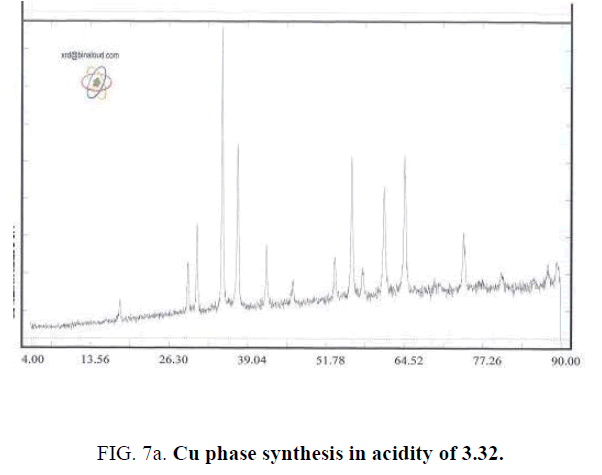 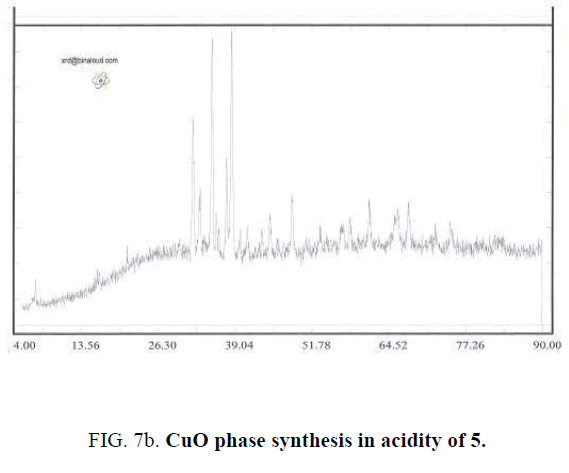 Figure 7b: CuO phase synthesis in acidity of 5. 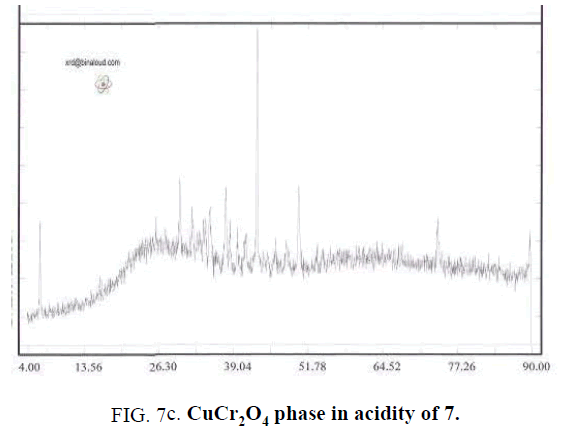 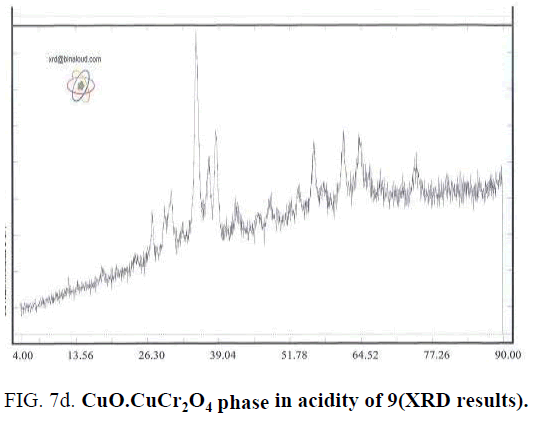 Cu-Chromite that used in increasing fuels burning rate has solid phase of CuO.CuCr2O4 that synthesis in PH of 9 according to XRD results. 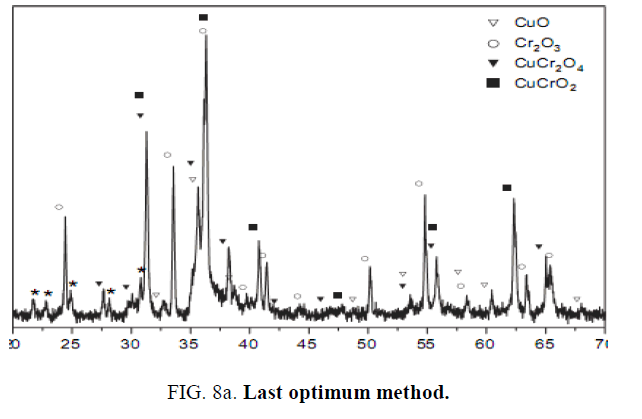 Producing Cu-Chromite catalyzer according to applications in solid fuels is important for burning rate catalyzer. Thermal analysis shows that Citrate gel have self-burning behavior and sol-gel method can used because of low costs, ease of action and uniform particle size for producing nano Cu-Chromite. 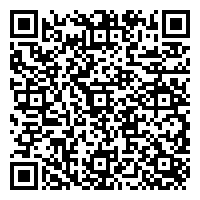