Synthesis and Investigation of Complex Compounds of Divalent Manganese, Copper, Cobalt and Zinc with Tryptophan and their Biological Activity

The chemistry of complex compounds of transition metals with multidentate ligands, which simultaneously contain several donor atoms, is not only theoretical but also of practical interest, since in addition to the unusual properties of such complexes, the structure and types of binding of multidentate ligands with different metals give a new impetus to the development coordination chemistry as a whole. Among the coordination compounds, the complexes obtained on the basis of biomaterials take a special place. This is due to the fact that they play an important role in many biochemical processes and therefore are widely used in plant growing, animal husbandry, and pharmacology.

In turn, the study of the properties and structure of coordination compounds of metal ions with organic ligands containing various donor centers was an important factor in the development of new approaches to their physic-chemical research [1-3]. On the other hand, complex compounds of many transition elements can possess a wide range of useful properties, for which the chemistry of complex compounds has not yet been sufficiently studied [4]. In this paper, we present methods of synthesis and study of the properties of manganese (II), copper (II), cobalt (II) and zinc (II) complexes with ligand (tryptophan).

A sample of 0.85 g (0.005 mole)-CuCl2 2H2O was dissolved in a two-necked flask under reflux in 30 ml of ethyl alcohol at a temperature of 60°C, and 2.04 g (0.001 mole) of ligand L-tryptophan-(in a molar ratio of 1: 2) previously dissolved in 20 ml of ethyl alcohol [5]. The resulting mixture was heated for 2 hours, then cooled to room temperature, filtered and put on crystallization. The beige-colored crystals were filtered, washed several times with the mother liquor, then 15-20 ml with acetone and dried in a desiccator over sulfuric acid until a constant weight was established.

A beige color solution obtained by dissolving 0.65 g (0.005 mole)-Zn powder in 20 ml of ethyl alcohol, 2.04 g (0.01 mole) of ligand L-tryptophan dissolved in 30 ml of ethyl alcohol (in a molar ratio 1: 1). The solution was heated for 2-2.5 hours at a temperature of 60°C. Further, the synthesis process was carried out according to the above described procedure.

According to the above procedures, 2.04 g (0.01 mol) of ligand L-tryptophan (molar ratio 1: 1), previously dissolved in 20 ml of ethyl alcohol, was added to 1.62 g (0.01 mole)-MnCl2 •2H2O dissolved in 20 ml of ethyl alcohol. The resulting mixture was heated for 2 hours, then cooled to room temperature, filtered, washed several times with the mother liquor, then 10-15 ml with acetone and dried in a desiccator over sulfuric acid until a constant weight was established.

According to the above procedures, 2.04 g (0.01 mol) of ligand L-tryptophan (molar ratio 1: 1), previously dissolved in 30 ml of ethyl alcohol, was added to 2.35 g (0.01 mole) –CoCl2 •6H2O dissolved in 20 ml of ethyl alcohol. The resulting mixture was heated for 2 hours [6,7], then cooled to room temperature, filtered, washed several times with the mother liquor, then 20-25 ml with acetone and dried in a desiccator over sulfuric acid until a constant weight was established.

The elemental analysis data of the metal-ligand complexes are pointed up in TABLE 1.

To determine the coordination character of the synthesized complex compounds formed between the ligand and the zinc, IR spectroscopic analysis was carried out (FIG. 1). When the IR spectra of the free ligand are aligned with the spectra of the complexes obtained, an obvious change is observed. In the reaction of zinc with a tryptophan molecule, the double absorption bands of amine NH tryptophan νNH=3402, 73 cm-1 and δNH=738.16 cm-1 disappear. A comparative analysis of the results of IR spectral analysis shows that a crystalline complex of the ionic type of tryptophan and Zn is synthesized. With the definition of the thermic stability and the composition of synthesized complexes [ZnL2(H2O)2] the thermographic analysis was made.

Thermocouples were used to determine the composition and durability of the synthesized complex compound and it was established that the complex is resistant to a temperature 298°C (FIG. 4). At higher temperatures, the complex gradually breaks down, and this process ends in several stages, and in all cases the final product of the thermolysis process consists of metal oxides. Thus, according to the results of the physicochemical methods used in the work, it is established that the composition and structure of the complexes obtained directly depends on the ratio of the initial products. 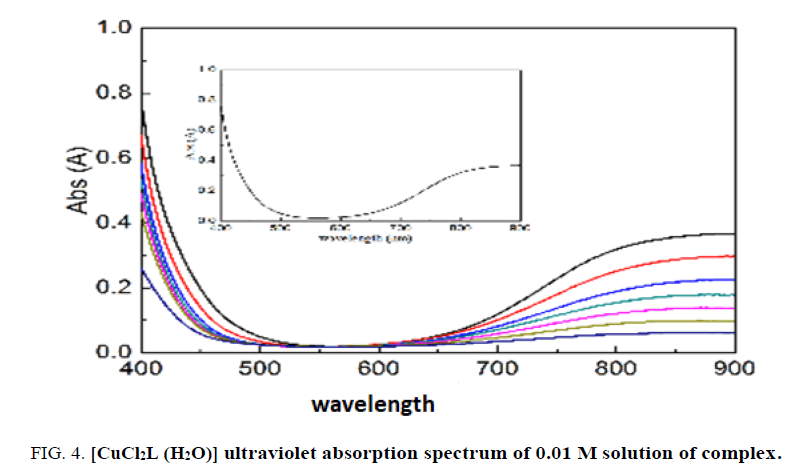 The UV-VIS spectroscopu analysis of 0.01 M of [CuCl2L2] 2H2O complex is water was made. It is clear from the specimen that the d-d passage is 590-620 nm wavelength.

FIG. 5. shows the result of X-ray phase analysis of the synthesis product. The interpretation of the obtained data also confirms the formation of the [ZnL2(H2O)2] complex. 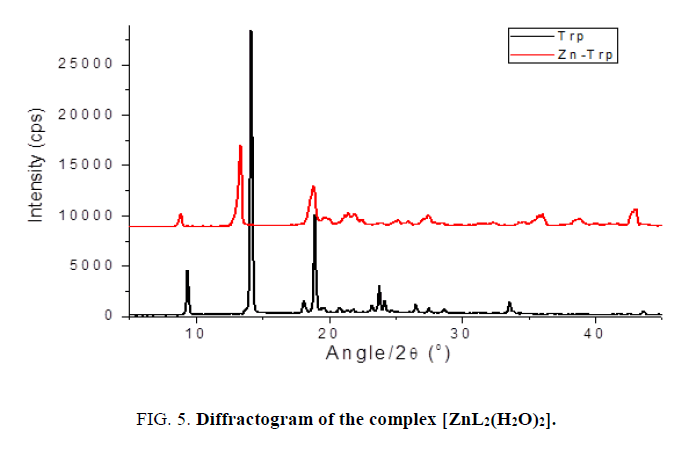 Since the parameters of the crystalline cell differ from each other, a coordination complex Zn-tryptophan was created (FİG. 6). Tryptophan peaks did not appear in Zn-tryptophan, but almost all complexes were created. 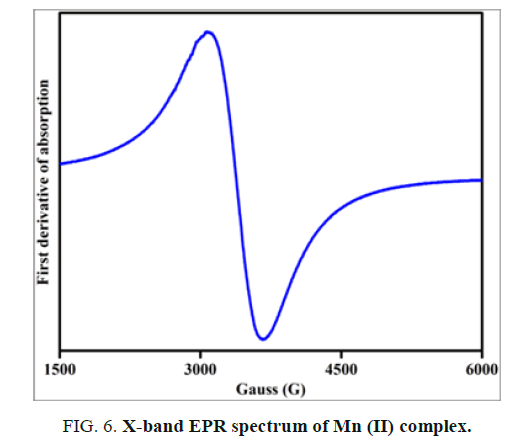 The X-band EPR spectrum of Mn (II) complex is obtained at room temperature for the polycrystalline sample and is shown in FIG. 6. The EPR spectrum exhibits a broad signal without fine or hyperfine structure.

The effective g value is found to be 2.04. This signal suggests that dipolar interactions between manganese ions exist. Mn (II) ions belongs to 3d5 electron configuration for 55Mn nucleus, the nuclear spin I=5/2 and hence EPR spectrum of Mn (II) complex at room temperature exhibits a characteristic six-line hyperfine splitting. If the symmetry around Mn (II) is distorted due to complexation, the resonances become anisotropic and a randomly oriented sample may exhibit a broad line. The observed broad signal in the present work suggests that the symmetry around Mn (II) ion in the complex is distorted one.

To determine the composition and thermal stability of the complexes under study, we performed elemental analysis, IR, UV-VIS and EPR spectral and thermogravimetric analysis. The results of the investigations showed that in all cases the final product of the thermal decomposition of the complexes is metal oxide. Thus, according to the results of the physicochemical methods used in the work, it is established that the composition and structure of the obtained complexes directly depends on the ratio of the initial products.

The energy of germination and the germination of seeds treated with zinc complexes with amino acids are determined on three-day and seven-day sprouts, respectively (TABLE 2). As can be seen from TABLE 1, the seeds treated with a complex of zinc with cysteine have high germination energy and germination. The stimulating effect of low concentrations of zinc sulphate solution on germination, germination energy, and seedling growth was noted in the works of a number of authors [5-10]. In these studies, it was noted that low concentrations of zinc sulphate exert a positive influence on the synthesis of photosynthetic pigments, while the introduction of zinc with phosphorus exhibits the opposite effect.

In the authors' opinion, such a negative effect is related to the interaction between zinc and phosphorus, which ultimately leads to the phenomenon of chlorosis. Some researchers believe that with the concentration of high concentrations of zinc, phosphorus and iron in the nutrient medium, zinc digestion by the root system of plants is difficult. However, the introduction of zinc and phosphorus in low concentrations increased the growth and development of plants, and the content of chlorophyll in the leaves also increased. Hence, it was concluded that low concentrations of these elements ensure the normal development of wheat plants.

The work was carried out with the financial support of the STCU project (number 6282). 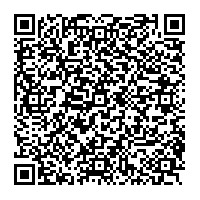