Statistical Analysis of the Dynamic Liquid Saturation in a Trickle Bed

The objective of the present study is to experimentally investigate the dynamic liquid saturation in a co-current trickle bed with non-Newtonian and foaming liquids and quantify the effect of operating variables on it. Experiments were carried out in a 10-cm diameter column of height 128 cm, packed with glass beads of 4 mm with air and water, carboxyl methyl cellulose (CMC) solutions and sodium lauryl sulphate (SLS) solutions. Experimental results indicate the dynamic liquid saturation increase with increase in liquid velocity and viscosity of the liquid, decrease with increase in gas velocity and decrease in surface tension of the liquid. The increase in dynamic liquid saturation is 12% for 3.5% CMC solution over the tap water, whereas the same decreases by 20% for 60 ppm SLS solution to that of the tap water one. Model equations are developed by factorial design analysis for predicting the dynamic liquid saturation of both non-Newtonian and foaming liquids. The experimental ones and the predicted results from model equations found to agree well. The correlation predicts the present data to within ± 15%.

Gas-liquid trickle bed is a packed bed of solid particles with a downward flow of the liquid; the gas phase may flow either upward or downward. The counter current one although more effective for transport operations, but susceptible to flooding in contrast to the co-current down flow operation where high gas and liquid throughputs can be used [1].

The co-current ones are of wide use in chemical processes mainly in the petrochemical, refinery and effluent treatment. Specifically, they are widely used for hydrotreating and hydrodesulfurization applications in the refining industry, and in the chemical industries for hydrogenation, oxidation and hydrodenitrogenation processes [2-7]. One of the important parameter that affects the performance of a trickle bed system is dynamic liquid saturation. This parameter is dependent on variables such as; gas and liquid flow rates, surface tension and viscosity of the liquid phase, and bed configuration.

The feed stock that is used in these operations is highly viscous. In hydrotreating reactions, usually higher viscous residual oils are used [16], which is equivalent to viscosity of 3.3% CMC solution [17]. In previous works, experimental studies up to 2% CMC solutions in water (a non-Newtonian liquid) are seen. As higher viscosity fluids are processed in trickle beds, it is necessary to characterize the hydrodynamics of trickle bed with liquid of higher viscosity. In the present study, an attempt was made to study the effect of liquid viscosity of a non-Newtonian liquid on dynamic liquid saturation.

In the present study water, carboxyl methyl cellulose (CMC) solutions in water at different concentrations (0.5%, 1.5%, 2.5% and 3.5%) and sodium lauryl sulphate (SLS) solutions in water at different concentrations (15 ppm, 30 ppm, 45 ppm and 60 ppm) are used as the liquid phase those have a varied viscosity and surface tension. Statistical design approach i.e., factorial design analysis is applied to develop model equations for predicting the dynamic liquid saturation of both non-Newtonian and foaming liquids. This method is advantageous as it provides the knowledge of interaction between the operating variables.

A 10 cm diameter cylindrical Plexiglas column of height 128 cm, packed with glass beads of 4 mm size was used for the experimental study. Schematic representation of the experimental setup is shown in Figure. 1. 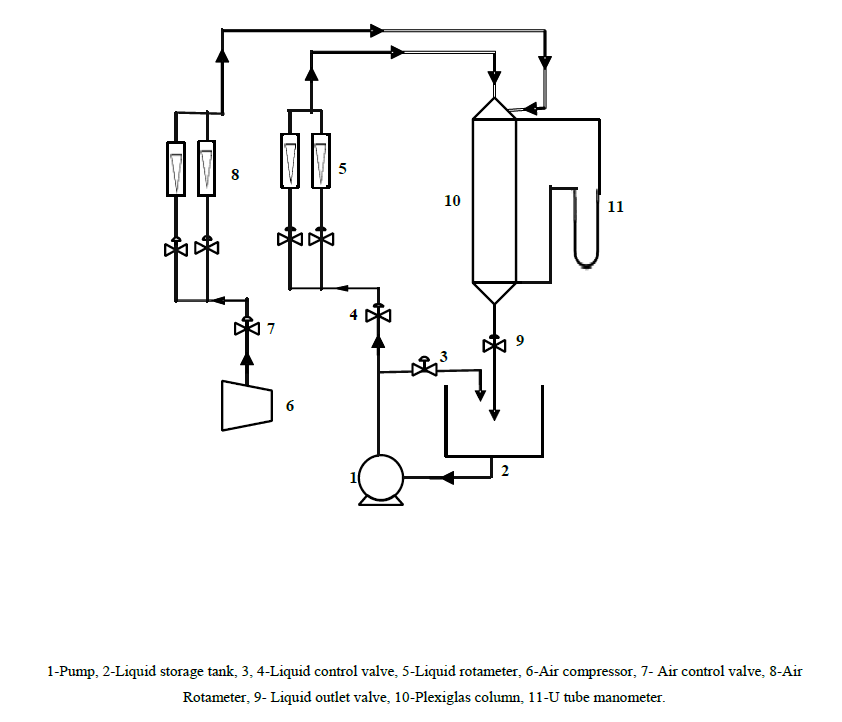 Firstly gas (air) was injected into the column at a desired flow rate using air rotameter and then the liquid was pumped to the column at a desired flow rate using water rotameter. Visual observation was made to identify the flow pattern of the fluids across the Plexiglas column. For each experimental run at a constant gas flow the liquid flow rate was increased gradually in steps. The liquid drainage method was used to measure the dynamic liquid saturation in the trickle bed used for the study.

To do so the valves in the inlet and outlet lines of the system were closed simultaneously. At least 30 minutes was given for the collection of the liquid drained from the column. Water, carboxyl methyl cellulose (CMC) solutions in water at different concentrations and Sodium Lauryl Sulphate (SLS) solutions in water at different concentrations were used as the liquid phase. The scope of the experiment is presented in Table 1. This Table includes the physical properties of the packing materials and the fluids used in the system used and the range of variation of the operating variables.

Table 1. Scope of the present study.

Experiments were conducted at different gas and liquid velocities in the range of 0.026-0.128 m/s and 0.003-0.023 m/s respectively. To ensure steady state in operation at least ten minutes of flow were allowed, and then the drainage initiated by stopping the in and out flow suddenly to record the dynamic liquid saturation of the system. The results obtained from the experiment are presented graphically.

Effect of liquid and gas velocity 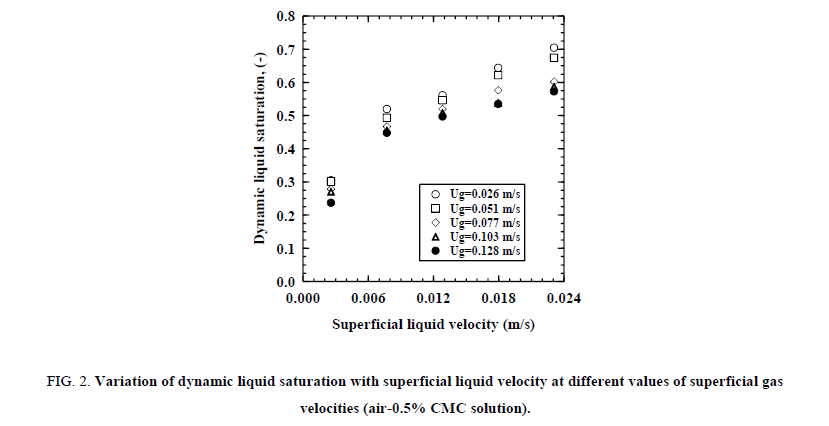 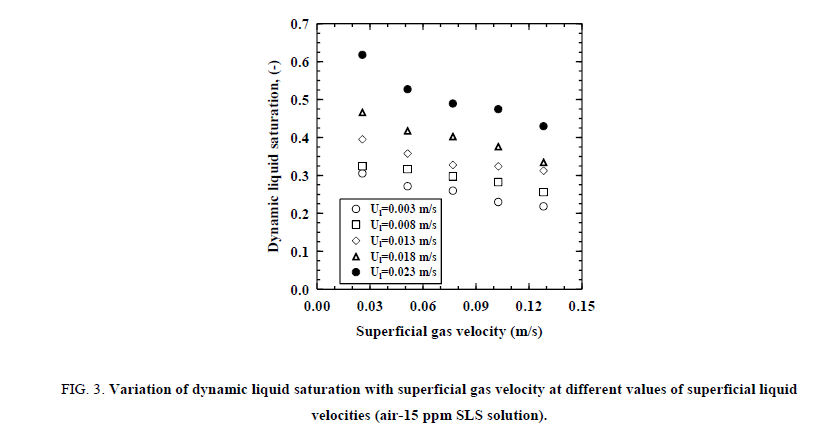 Effect of viscosity and surface tension 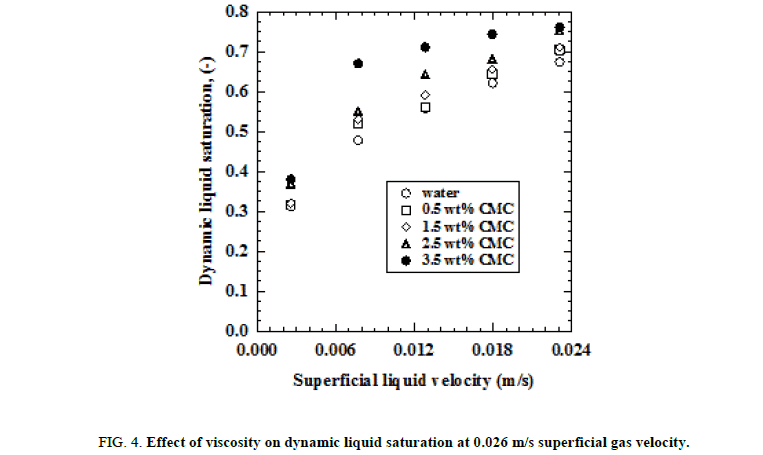 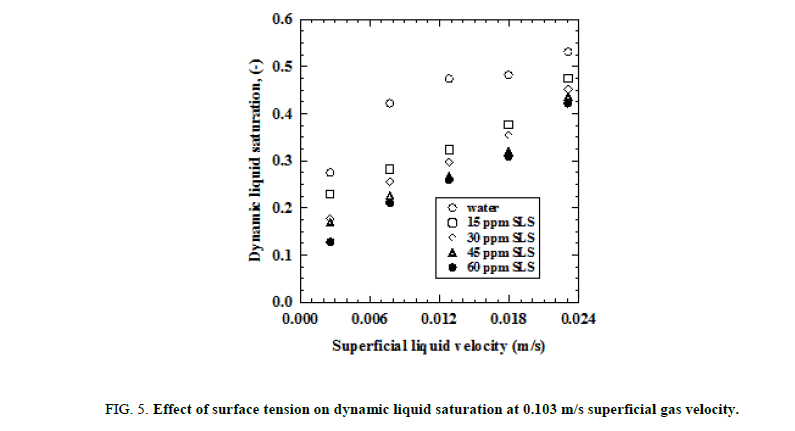 Development of correlation based on factorial design analysis

Factorial design analysis is a suiTable tool to show interaction among the variables and explicitly find out the effect of each of the variables quantitatively on the response. In this method, the experiments were repeated twice at two levels, lower level (-1 level) and higher level (+1 level) for each of the operating variables. The scope of the factors considered for factorial experimentation is presented in Tables 2 and 3. The variables, which affect the dynamic liquid saturation in trickle bed, are viscosity, surface tension, liquid and gas velocities. The total numbers of experiments required at two levels for the three variables is 8. A correlation based on the factorial design analysis was developed for the dynamic liquid saturation of the trickle bed.

Table 2. Scope of the factors for dynamic liquid saturation for non-Newtonian liquid.

Table 3. Scope of the factors for dynamic liquid saturation for foaming liquid.

The model equations are assumed to be linear with respect to the level of each of the variable and the final equation takes the general form,

(i) Coefficients are calculated by the Yates technique;

where bi is the coefficient of various terms in Equation. (2), Yi is the response, ‘i’ is the level of the variable (either −1 or +1), and N is the total number of treatments.

Experimental data for dynamic liquid saturation based on factorial design and the nature of the effects is presented in Table 4 for non-Newtonian liquid and Table 5 for foaming liquid respectively. In these Tables the column (4) data were derived from the response column (3) by summing and differencing successive pairs and the columns (5) and (6) have derived from the previous one in the same way. This was done to see the effect of the variation of the operating variable on the response. The effect of the operating variable on the response calculated from column (6) is presented in column (7). Column (8) presents the sum of squares of the deviations from the mean. Column (9) represents the percentage contribution of each treatment combination, that is, if the variation is made in the combination how much the response is affected. It was calculated from column (8) by dividing the total sum of squares and multiplying by 100.

Table 4: The effects of parameters on dynamic liquid saturation as per factorial design analysis for non-Newtonian liquid.

Table 5. The effects of parameters on dynamic liquid saturation as per factorial design analysis for foaming liquid.

From the factorial design the following equations were obtained,

For easiness in calculation the model equations developed from factorial design analysis can be written in the predictive form by converting the coded variables to actual variables. Thus, the Equations (9) and (10) are converted to the equations in predictive form as Equations (11) and (12), given below. 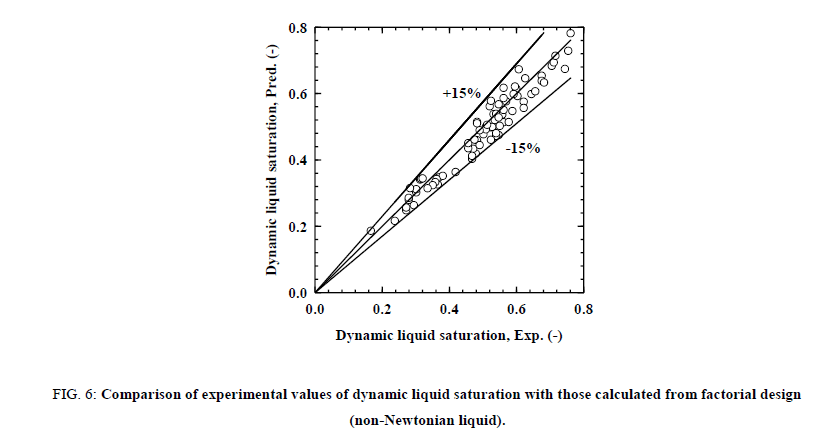 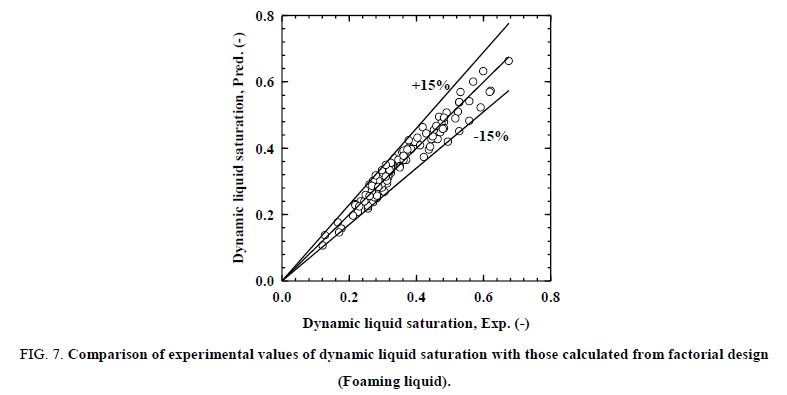