Mometasone furoate [MF] ( Figure 1) is chemically 9, 21-dichloro-17α-[(2-furanylcarbonyl) oxy]-11β-hydroxy-16 α-methylpregna-1,4-diene-3,20-dione, a high potency glucocorticoid. It has anti-inflammatory, immunosuppressive, vasoconstriction and antiproliferative actions. It is effective for treatment of skin diseases like eczema, dermatitis and psoriasis. Corticosteroids are thought to act by the induction to phospholipase A2 inhibitory proteins, collectively called lipocortin’s. It is postulated that these proteins control the biosynthesis of potent mediators of inflammation [1,2]. It is official in IP, BP and USP [3-5]. 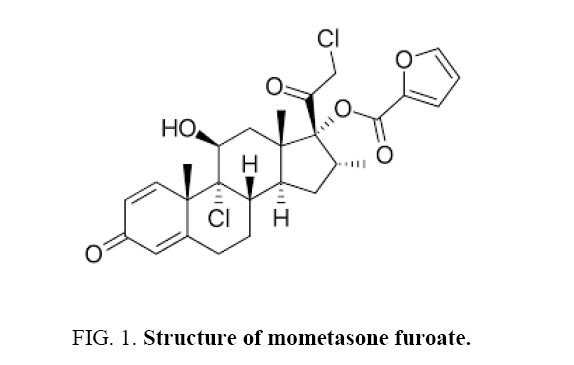 Salicylic acid [SA] (Figure 2) is chemically 2-hydroxy benzoic acid, has antiseptic, antifungal and keratolytic properties. It is used to treat warts, psoriasis, corns and other skin conditions. It works by softening and loosening dry, scaly, or thickened skin so that it falls off or can be removed easily [1,2]. It is official in IP, BP and USP [3-5]. Combination of Mometasone furoate and Salicylic acid is available in market as an ointment and used for the treatment of skin inflammation, skin diseases, acne, skin redness and other conditions. 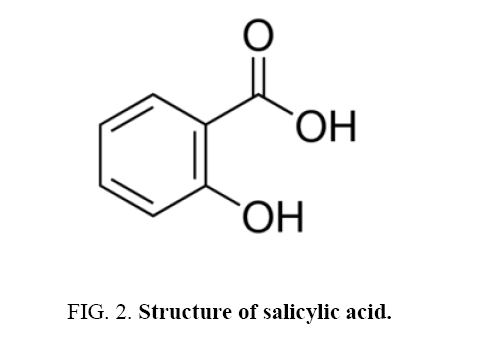 Literature survey revealed few UV-Visible spectrophotometric methods for estimation of MF in combination with other drugs like Mupirocin, Formoterol, Terbinafine etc., [6]. Also, there are few stabilities indicating HPLC methods reported for MF and SA in combination.

There is a single ratio derivative UV-Visible spectrophotometric method reported for simultaneous determination of MF and SA. This method involves calculation of ratio absorbance’s and conversion to first order derivative [7]. It is based on standard addition technique. The method reported is tedious and time consuming. So, the study was aimed to develop simple and rapid UV-Visible spectrophotometric method for simultaneous estimation of MF and SA.

Pure samples of MF and SA were kindly supplied as a gift sample by Nulife Pharmaceuticals, Pimpri, Pune. All reagents used were of analytical grade. Momate-S ointment manufactured by Glenmark Pharmaceuticals containing MF 0.1% w/w and SA 5% w/w was purchased from local market [8].

Selection of wavelengths for analysis 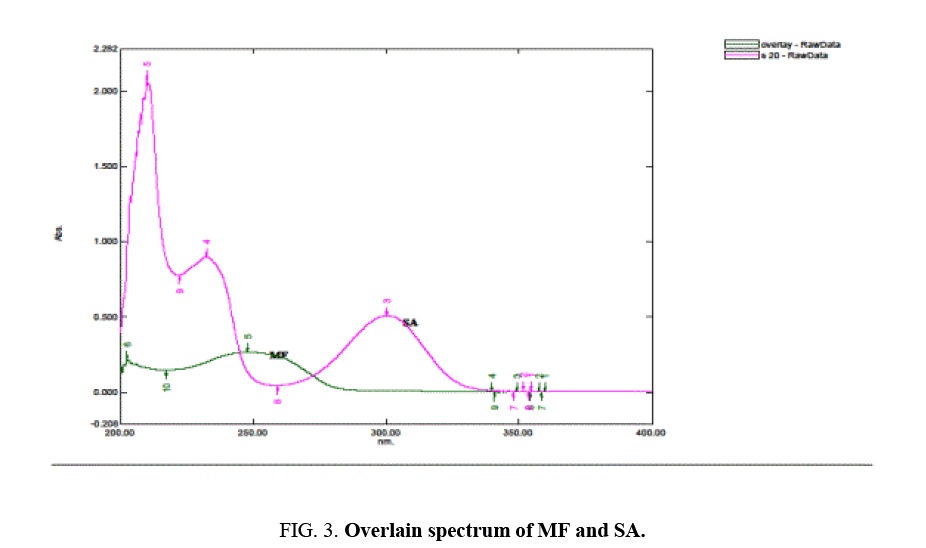 Solutions containing 1-10 μg/ml of MF and 5-50 μg/ml of SA separately were scanned and absorbances were measured at selected wavelengths. Calibration curves were obtained by plotting Ab Vs Conc. and absorptivity values were obtained.

Laboratory mixture containing 4 μg/ml of MF and 20 μg/ml of SA was scanned and absorbances were measured at selected wavelengths. Calculations were done by following formulae,

Concentration of SA was calculated by formula,

Concentration of MF was calculated by formula,

1 gm of ointment was accurately weighed. Accurately weighed 9 mg of pure sample of MF was added by standard addition technique to maintain ratio MF:SA (1:5) and dissolved in 50 ml methanol with the help of ultrasonicator for 20 min. The solution was filtered through 0.45 μm filter. Appropriate dilutions were done to get concentration of 4 μg/ml of MF and 20 μg/ml of SA. Absorbances were measured at selected wavelengths and % drug contents were calculated by above given formulae.

A series of dilutions of mixture containing 1-10 μg/ml of MF and 5-50 μg/ml of SA were prepared from standard stock mixture solution. All dilutions were scanned and absorbances were measured at selected wavelengths. Graphs were plotted. Regression equation and Correlation coefficients were obtained ( Figure 4). 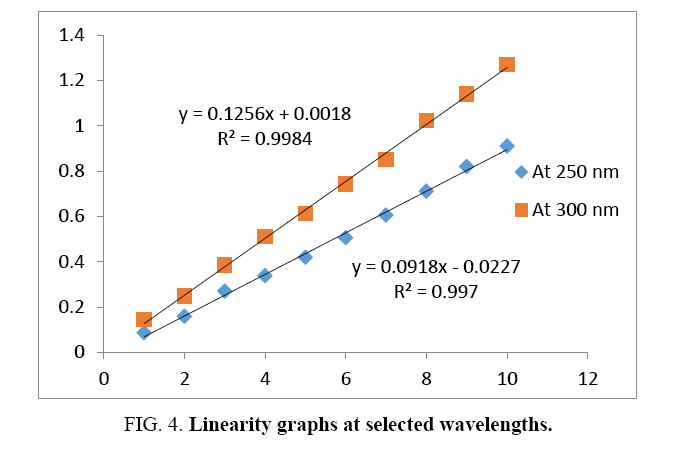 Accuracy of the method was determined by recovery studies at three different levels. Known amount of pure drugs were spiked to sample at 75%, 100% and 125% level and analyzed by the developed method in triplicate.

Repeatability of the method was assured by repeating the developed procedure six times on the same day. Intermediate precision was estimated by inter-day analysis where developed procedure was repeated on three consecutive days in triplicate. Results were expressed as the standard deviation and % RSD.

Since both drugs are present in vast concentration difference standard addition technique was applied to maintain ratio MF:SA (1:5). From the overlain spectrum, it was found that at wavelength 300 nm MF is showing zero absorbance, hence at this wavelength concentration of SA can be determined directly. So, absorption correction method was selected for analysis.

Marketed formulation was analyzed by proposed method and amount of MF and SA were found to be 97.54% w/w and 103.85% w/w respectively as shown in Table 1.

Specificity is the ability of the analytical method to measure the response in presence of interferences. The UV spectra of drugs in sample solutions were found to be identical to the UV spectra obtained from standard solutions. No interference from formulation excipients was found, proves specificity of the proposed method.

A simple and rapid UV-Visible spectrophotometric was developed for simultaneous estimation of Mometasone furoate and Salicylic acid in topical ointment formulation. The developed method is based on Absorption correction method by standard addition technique. The proposed method was validated as per ICH guidelines and found to be accurate, precise and specific. Hence, it can be used successfully for routine quality control analysis.