Secure Routing-Solution to Diminish DOS Attack in AODV Based MANET

MANET has exceptional individuality like changing topology, reduced bandwidth, wireless radio medium, limited resource and no centralized control. It is composed of mobile nodes which traverse through wireless link by agreeing to route message for each other. Securing ad hoc routing is a great challenge. The mobile ad hoc network is subjected to various types of attack at different layers of the protocol stack. In this proposed work, our focus is on the attack on the network layer. DOS (Denial of Service) attack affects the network performance by causing data loss. Many solutions have been proposed to encounter DOS, but the issues still persist because it is not prevented or avoided completely. We propose a solution for DOS in MANET using AODV without affecting the network performance.

MANETs are formed by a group of mobile nodes which communicate through wireless links by agreeing to route message for each other. Ad hoc networks depend on co-operation and trust between nodes. Trusting criteria in MANET makes it vulnerable to attacks. All ad hoc routing protocols must ensure that the path from source to destination works correctly, i.e. routing signals cannot be spoofed, routing loops cannot be formed and route cannot be altered from the shortest path by spiteful action. A node is malicious if it can perform arbitrary actions that do not follow normal or expected behavior and it cannot validate itself as a truthful node to other nodes. MANET is subjected to challenges like availability, integrity, confidentiality, authentication and nonrepudiation. MANET doesn’t have centralized administration and they have restricted resources like bandwidth and power. Wireless link, dynamic topology makes MANET prone to security issues. The success of a MANET depends on its security. MANETs can be attacked on any layer of the network protocol stack. Network layer attacks are most important attack to be solved. Attacks are grouped into two types such as active attacks and passive attacks.

Active attacks can be internal or external [1,2]. They inject packets in network or routing protocol. Malicious nodes, which enter the network take complete control of the network and change its behavior. Passive attacks silently capture valuable data during transmission silently without damaging the network. They are threat against privacy. AODV is more efficient in terms of network performance, but they easily allow attackers to advertise falsified route information to redirect the route and launch DOS attack. Ad hoc on-demand distance vector routing protocol has two functionalities such as route discovery and route maintenance. In route discovery phase the protocol will establish a route by broadcasting the route request (RREQ) packet across the network. The intermediate nodes after receiving the RREQ packet will check whether it is the designated node for the received packet. If it is the designated node, then it will generate a RREP packet to the source node or it will broadcast the received packet to its neighboring node. In the route maintenance phase, if any node detects any broken link in the network, then a route error (RERR) packet will be forwarded to the source node. After receiving an error packet, the source node will update its routing table and then go for an alternate route for communication.

Eaves dropping: Intercepting and reading a conversation by unintended receiver. In a MANET, since the mobile host shares the wireless medium, messages can be eavesdropped and fake messages can also be injected into the network.

This layer maintains one hop connectivity among neighbors so attacks like monitoring and analyzing traffic and exploiting wired equivalent privacy (WEP) weakness can be made.

Attackers mostly concentrate on this layer; they intrude, absorb and control the network traffic flow. They create routing loops, cause network congestion and performance degradation. Wormhole, black hole, gray hole, Byzantine, rushing, resource consumption are some of the attacks encountered in this layer. All the attacks aim at denial of service. Wormhole attack, two attackers are needed, they reside at different location. One records the packet and tunnels them to the other attacker. It disturbs normal routing by short circuiting the normal flow. It is difficult to identify this attack because they do not modify any data packet or generate false traffic.

In black hole attack [6] after receiving the RREQ the attacking node will exploit the MANET routing protocol like AODV to advertise itself as it is having a valid route to destination by increasing the sequence number. When the data is transmitted through the malicious node it will drop the entire packet without forwarding it to the destination. Gray hole attack, It is also same as black hole attack but the attacker does not get into the path but it also does not forward any data packet that goes through it. In Byzantine attack [7] the intermediate nodes will work alone or in groups to carry out the attack in the network. In this type of attack the malicious node will forward packets through a non-existing path or it will selectively drop the packet which results in performance degradation of the routing services. In rushing attack [8] two colluded attackers will make use of the tunnel procedure and form a wormhole. The tunneled packet propagates faster than the normal multi-hop route. In resource consumption attack [3], the attackers will consume the battery power by requesting excessive route discovery or by forwarding unnecessary packet to the victim node.

Session hijacking is done by the attacker in this layer. SYN (synchronization) flooding attack is a denial of service attack. The attacker creates a large number of half opened TCP connection with the victim node but it never completes the handshake to open the connection. In the TCP session hijacking, the attacker will spoof the victims IP address and then perform the denial of service attack. Impersonation of node is done by the attackers in this layer.

The attackers targeting the multiple layers will cause the denial of service. The attacker will cause a signal jamming at physical layer which will disturb the normal communication. In the link layer, the malicious node will occupy the channels through capture effect and prevent the other nodes from accessing the channel. In the network layer, the routing is interrupted through control packet modification, selective dropping and table overflow. In Transport and application layers the malicious node will cause the denial of service.

A cluster based scheme BHAPSC [16] is used to prevent black hole attack in MANET. In this method, the malicious node can be detected along with its exact location. BHAPSC maintained a friend table and a trust estimate are invoked to calculate trust values. If the value of the node exceeds the threshold level then it will be broadcasted as a black hole. Limitation in this method is the overhead encountered in the generation of the friend table. Two step co-operative mechanism [17] is used to detect black hole attack. In this method (SnT) table and status (ST) table are maintained to track the neighbors Sequence and its status along with this a neighbor list is also maintained. Voter table is also maintained by the source for gathering votes for the suspicious node. Drawback in this method is the added overhead for each node to maintain numerous tables. Watchdog method [5,18], in this method when a node forwards a packet the watchdog ensures that whether the next node forward the packet. If the next node does not transmit then it is a malicious node. In DPRAODV [19], a threshold level for the sequence number is fixed. If the RREP sequence is greater than threshold then the node is malicious. This is a simple method because no modification is made to the AODV protocol. In BDSR [20], a nonexistent destination address is sent and if any node replies then it is denoted as malicious. Advanced algorithm [21] aimed to detect and prevent cooperative black hole and gray hole using end to end checking with prelude and postlude messaging. The data flow is monitored and if the data loss is out of tolerable range and exceeds the threshold level then a backbone network of trusted nodes collects the outcome of the monitoring nodes and detects the malicious node. In this method, the drawback is that the nodes lose energy by monitoring. There will be a significant data loss before detecting the malicious node. Anti-black hole mechanism (ABM) [22] aims to detect malicious nodes. ABM calculates the abnormal difference between routing message from the node. A node will be malicious if it replies with RREP but it would not have broadcasted any RREQ at all in the network. Modified AODV [23] routing protocol aims to improve security and performance against black hole attack. It eliminates one or more black hole nodes from the network designed using AODV protocol. Two reply packets are generated by the intermediate node. The sequence number of the second generated RREP should be greater than the first generated RREP sequence number by 1. Every node after receiving the RREP, check for the verify field in the packet, if it is 0 then the packet is not verified. Then the sequence number is checked, if it satisfies the condition then it is a valid node and the verify field is set as 1. On the off chance if the intermediate node gets a RREP from a node with a higher sequence number, then a similar procedure is repeated and after that it sets the verified field as 0 and it ignores the packet. Solution to handle DDOS attack [24] proposes that a monitoring node sends hello packet to neighbor node and wait for a reply. If the node does not receive any reply within the prescribed time limit, then the node is considered as a victim node and its id is disabled.

Case 1: If the time taken by a packet to reach the destination falls within the calculated threshold limit then the communication continues. If it does not match the threshold value, then case 2 will be executed.

If the communication time taken by the packet to reach the destination exceeds or falls below the threshold value, then we check the acknowledging node id. If the id matches with the original id saved in the source then it continues transmitting the packet. If it doesn’t match, then the node is isolated from the network and declared as malicious.

This proposed scheme helps in securing transmission in MANET. It is time consuming to check the acknowledging node id for every packet so in this proposed scheme we are checking the id only if the communication time taken by a path exceeds the calculated threshold value. The flow chart representing SRAODV is shown in FIG. 1. 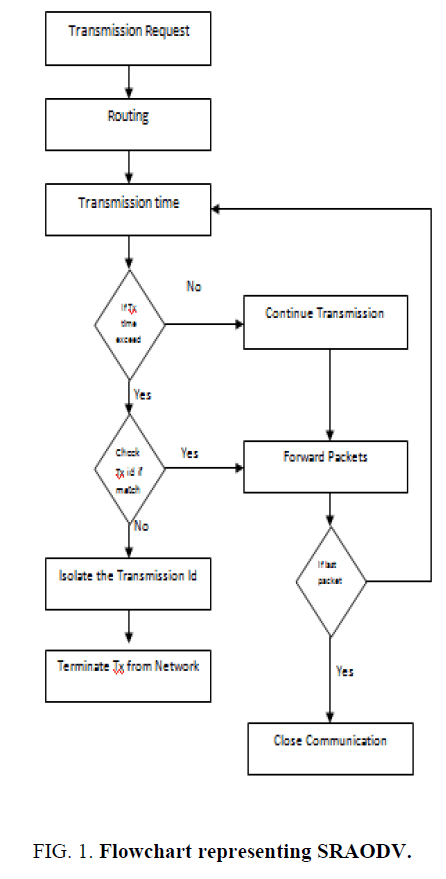 The proposed scheme is simulated in NS2 with following configuration shown in TABLE 1. 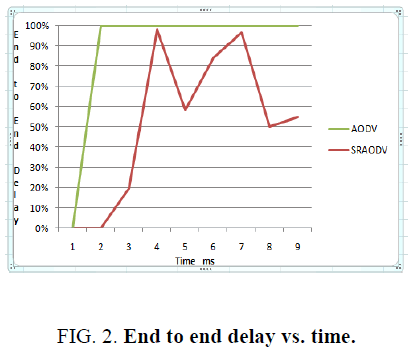 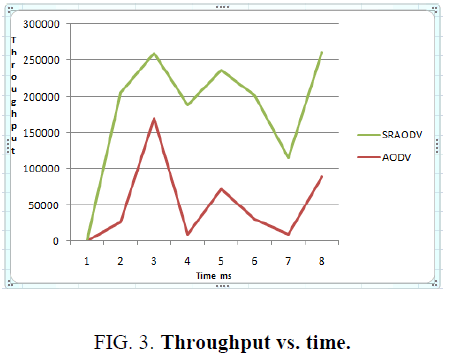 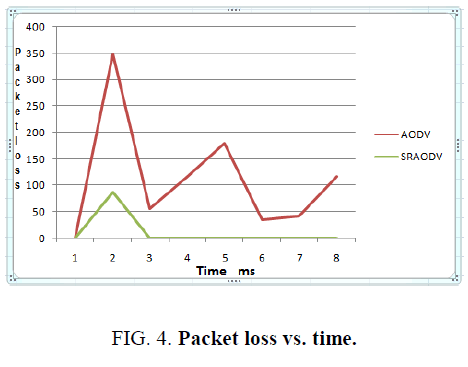 MANET is a self-configuring network without any specialized infrastructure. Security is a challenging issue faced by MANET. Most of the existing work has developed solution to the existing problem but more issues have arisen when the existing issues are addressed. The simulation result shows that the proposed solution is implemented and the problem caused by the attack during communication is solved. The performance parameters such as end to end delay, throughput and packet loss are analyzed. The proposed solution for DOS attack is achieved without affecting network performance. It takes care of existing and future issues. 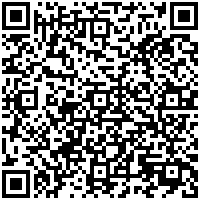