Jagadish S1* and Nakone B2

Citation: Jagadish S, Nakone B. On the Stability of Collinear Equilibrium Points in the Relativistic R3BP with a Smaller Oblate Primary. J Space Explor. 2017;6(1):112.

The general three-body problem concerns the motion of three arbitrary spherically symmetric bodies. Each body is modeled as a point mass and their motion is influenced solely by the gravitational forces they exert on one another and also their motion has no specific path. There is no closed form analytical solution to the general three-body problem.

The restricted three-body problem is an approximation of general three-body problem in which one body is assumed to have an infinitesimal mass as compared to the other two bodies each of much larger. The two massive bodies called primaries revolve around their common center of mass in circular orbits in a rotating coordinate system in which the infinitesimal mass can be at rest at five equilibrium points also called equilibrium solutions. Three of them labeled L1, L2, L3 and are called collinear points and they are lying on the line joining the primaries, while the other two labeled L4 and L5 called triangular points form equilateral triangles with the primaries. The triangular points are stable for the mass ratio μ < 0.03852... [1] and the analysis has revealed that the collinear points are unstable in both linear and nonlinear sense.

The equilibrium solutions are very useful for the space mission design. For example the Solar and Heliospheric Observatory (SOHO) and Wilkinson Microwave Anisotropy Probe (WMAP) launched by NASA are in operation at the collinear points L1 and L2 of the Sun-Earth system.

The classical restricted three-body problem considers the bodies to be strictly spherical, but in nature they are either oblate or triaxial. It must be noted that the asphericity of the primaries is of great importance [2,3].

Some important contributions, related to the equilibrium points in the restricted three-body problem with one or both primaries are oblate or triaxial can be found as studied by Sharma and Subba Rao [4]; Oberti and Vienne [5]; Abouelmagd et al.[7]; Singh and Umar [8].

The relativistic restricted three- body problem as we consider it arose from the work of Brumberg [9,10]. Later on, Bhatnagar and Hallan [11], Douskos and Perdios [12] and Ahmed et al. [13] studied the stability of triangular points of the same model problem and obtained three different results regarding the region of stability.

Ragos et al. [14] studied the existence, position, and stability of collinear points of the same model problem. Recently, the study of equilibrium points in the relativistic restricted three- body problem with perturbing forces such as radiation, oblateness and small perturbations in the Coriolis and centrifugal forces has been conducted by several authors (Abd El- Bar and Abd El- Salam [15]; Abd El-Salam and Abd El- Bar [16]; Singh and Bello [17,18]; Katour et al. [19]; Bello and Singh [20].

From authors’ knowledge, no work has been done on the stability of collinear points with perturbing forces in the relativistic R3BP.

Hence, it raised a curiosity in our minds to study the effect of oblateness of the smaller primary on the locations and stability of collinear equilibrium points in the relativistic R3BP.

This paper is organized as follows: In Sect. 2, the equations governing the motion are presented; Sect. 3 describes the positions of collinear points, while their linear stability is analyzed in Sect. 4. A numerical application of these results and discussion are given in Sect.5 and 6, respectively. Finally, Sect. 7 conveys the main findings of this paper.

The pertinent equations of motion of an infinitesimal mass in the relativistic R3BP in a barycentric synodic coordinate system and dimensionless variables, when the effect of oblateness of the smaller primary is introduced with the help of the parameter can be written as Brumberg [9] and Bhatnagar and Hallan [11].

[21], where AE and AP are the equatorial and polar radii of the smaller primary, and R is the distance between the primaries.

have been ignored in writing above equations. 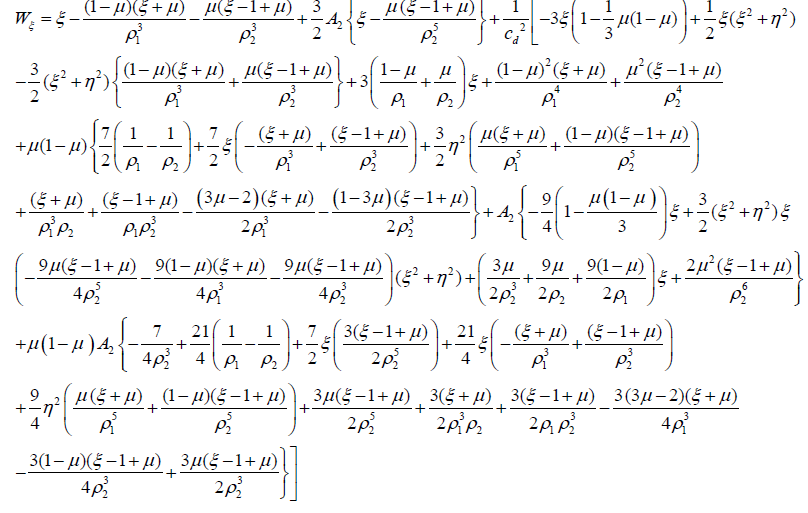 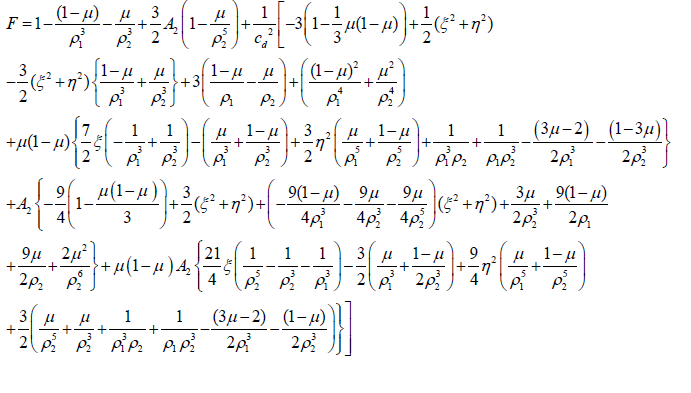 In order to find the collinear points, we put in equation (5). Their abscissae are the roots of the equation 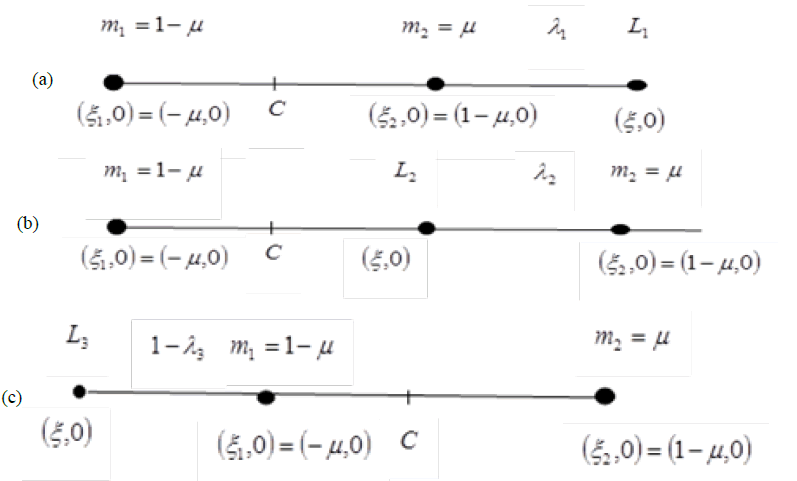 ; ; since the distance between the primaries is unity, i.e. and ξ2=1−μ then

Now substituting equation (7) in (6), we obtain

In the presence of oblateness effect only, we have

In the presence of oblateness effect only, we have,

In the presence of oblateness effect only, we have,

It is noticed that in each case there exists only one physically reasonable root.

We examine the stability of an equilibrium configuration; that is, its ability to restrain the body motion in its vicinity. To do so we displace the infinitesimal body a little from an equilibrium point with a small velocity. If its motion is rapid departure from vicinity of the point, we call such a position of equilibrium an unstable one. If the body oscillates about the point, it is said to be a stable position.

In order to study the stability of the collinear points, following Singh and Bello [17] the characteristic equation is given by (13):

The second order partial derivative of 0 are denoted by subscripts. The superscript 0 indicates that the derivative is to be evaluated at the collinear equilibrium points (ξ0 ,η0) under consideration.

The second order derivatives are In order to study the stability of the collinear points we have to study the motion in the proximity of these points, hence in this case (14a)-(21a) can be written as: 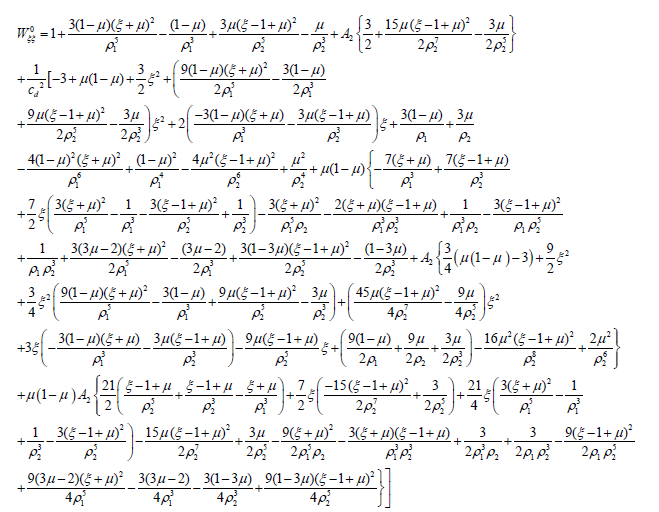 To show Δ is positive it is sufficient to show that

M can also be written as

Now we will study the signs of

Firstly, we will do this at L1, since the coordinates of this point is

contrary to the classical case where

, Hence the discriminant of the equation (13) is positive, and the characteristic roots can be written as

where σ and τ are real.

Thus ω1,2 are real and , L1 are pure imaginary, hence the motion around the collinear point , L1 is unbounded and the solution is unstable.

Similarly, it can be shown that the points L2 , L3 are also unstable.

The necessary data used have been borrowed from Sharma and SubbaRao [4] and Ragos et al. [14]. We have used some members of the solar system (mentioned in Table 1) to examine the existence and position of the collinear equilibrium points. Equations (8), (10), (12) and (8a), (10a), (12a) have been solved for the various pairs of the solar system. In Table 2 we present the positions of collinear points of the Sun-Planet pairs of Table 1. We also include the corresponding positions respectively in the classical problem, classical problem with oblateness, relativistic problem and relativistic problem with oblateness for comparison purposes (first entry, second entry, third entry and forth entry respectively for each system).

Table 1: Parameters of the systems.

However, in all cases it is found that the third and fourth entries of the relativistic problem only and relativistic problem with oblateness respectively are same up to fourteen decimal places. This indicates that in the presence of relativistic terms, the effect of oblateness does not show physically on the positions of collinear points in our Solar system. It is also observed that all the parameters involved have no effect on the position of L3 of the Sun -Mars system.

For the future work, the effect of mass ratios on the locations and stability of collinear points are suggested.