The mechanical and dynamic behaviors of Epoxy/MWCNTs and Epoxy/Al2O3 nanocomposites were investigated in this study. Tensile and impact properties were measured for the two nanocomposites. Free vibration test was applied to measure frequency responses and damping factors. The results showed a reduction in the mechanical properties as well as the damping factors. Frequency response and damping factor was strongly affected by the weight percent of the nanofillers. MWCNTs enhanced the bonding between the Epoxy resin and nanotubes causing reduction in the ability to dissipate energy and improvement in stiffness. The results also demonstrated that, the natural frequency of nanocomposites was increased by increasing the weight percent of nanofillers. The damping factor has the same down trend with the mechanical properties of the nanocomposites.

In the recent years, there is a great attention toward nanocomposite techniques to enhance the performance, mechanical and dynamic properties [1,2]. Especially, the polymeric matrix based nanocomposites reinforced with small percentages of strong nanofillers. Recognizing of their unique properties, it has been used for a wide range of applications such as aerospace industries, aircraft, coating, automotive, and marine engineering [3]. Among various types of polymeric matrices, Epoxy resin is the most polymer matrix used for advanced nanocomposite. The Epoxy matrix exhibit high stiffness and good adhesion to the embedded reinforcement.

Recent research articles focus on polymeric matrix embedded with MWCNTs. They offer more advantages and attracting scientific and industrial interest due to their unique characteristics [4]. Addition of small amount of MWCNTs to the polymeric matrix can improve the nanocomposites stiffness. However, large specific surface areas of MWCNTs caused the ability to agglomerate, which decline the nanocomposites strength as the results of inhomogeneous dispersion and stress concentration in the polymer matrix [5]. It is recognized that carbon nanoparticles enhance the yield and fracture strength of polymeric matrix [6-9]. However, Laurenzi et al. [10] showed the reduction of tensile properties of MWCNTs reinforced Epoxy matrix.

Ceramic-polymer nanocomposites have a great potential for industrial applications. They combine hardness, stiffness and wear resistance of ceramics and elasticity of polymer [11]. Nanomaterials defined as the nanoparticles with dimensions smaller than 100 nm [12]. Many studies demonstrated that nanomaterials exhibit enhanced properties, which forward with increasing the contents of nanoparticles [13]. Ceramic nanoparticles such as Al2O3 play an important role in the nanocomposite techniques due to their ability to enhance the mechanical characteristics. Their nanometer scale and extra ordinary characteristics make them unique nanofillers for multifunctional composites and structures [14]. Many researchers study the influence of nanoparticles on the nanocomposite properties. Devendra et al. [15] showed the reduction of tensile and impact properties of Epoxy matrix with addition of various amounts of Al2O3.

During the past years, it has become most important to resist impact noise and vibration. From this point of view, mechanical dampers have been investigated and developed and so, the utilization of damping materials is a key point to produce efficient damping to eliminate vibration and noise. Damping materials must have good ability to reduce strain energy when subjected to vibratory loads. They have been widely used in the high performance structural applications fields such as construction, aerospace, marine, etc. Damping is a significant modal parameter for the structures design in which cyclic loading and vibration control are critical. Damping affected by different environmental parameters, such as amplitude of stress, frequency, static preload and temperature. Damping affected also by grain size, corrosion fatigue, number of fatigue cycles and porosity [16].

Epoxy resin (Kemapoxy 150) was used as a polymeric matrix in this study with general chemical formula shown in Figure 1. Nanocomposites were prepared by adding MWCNTs with inner and outer diameters of 20 nm and 30 nm, respectively, and Al2O3 nanoparticles have an average diameter of 10 nm. Figure 2 (a) and (b) shows TEM image of Al2O3 nanoparticles and MWCNTs, respectively. It was found from Figure 2 (a) that Al2O3 nanoparticles are almost needle and irregular spherical shape, also the size of nano Al2O3 is well proportioned. Figure 2 (b) shows that the purified MWCNTs show smooth and uniform surface morphology, the outer diameters were almost consistent with the data provided by the supplier. Nanofillers with 0.25 wt%, 0.5 wt%, 0.75 wt% and 1 wt% were added to the resin to prepare nanocomposites and then stirred mechanically for twenty minutes at room temperature, using SUPERMIX homogenizer (model DEPOSE), then the hardener was added to the mixture by the ratio 2:1 by weight and then stirred mechanically again for ten minutes. The mixture poured in a silicon moulds have dimensions suitable for the required test according to test standards. Finally, the mixture was allowed to fully harden at room temperature for 7 days according to the specification of the Epoxy matrix. 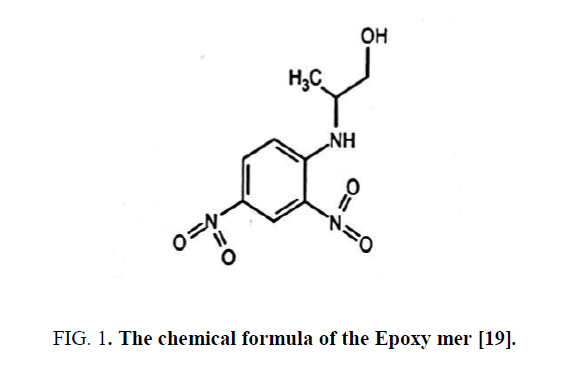 Figure 2: TEM micrographs of raw material (a) Al2O3 nanoparticles and (b) MWCNTs.

Tensile test of the nanocomposites was performed according to ASTM D 638-03 standard, using the (Instron) universal testing machine with a load cell of 5 KN and a constant speed of 10 mm/min. Three specimens for each condition were tested. The load displacement results were analyzed to calculate the tensile strength of nanocomposite specimens.

Charpy impact test was performed according to DIN-ISO179. The impact strength of the composites was measured using notched specimen with rectangular dimensions of 80 × 10 × 4 mm3. Charpy impact strength-testing machine (HIT 50P Zwick/Roell) was used with a pendulum energy 0.5 Joule and angle of inclination (fall angle) 106.38o at room temperature. The distance between the supports was set to 60 mm. three specimens of each condition were tested and the average values of the data are reported.

Rectangular specimens having 200 × 20 × 4 mm3 were examined. The composite beam without nanofillers and the nanocomposite beam with MWCNTs and Al2O3 were used as samples for the damping test. To investigate the damping factor and natural frequency characteristics, an experimental study were performed using vibration testing equipment illustrated in Figure 3. A force transducer (BK8230) was attached from one side of the specimen to measure the input force. An accelerometer (DeltaTron-4507 B) was attached from the other side of the sample to detect acceleration. Data Acquisition, software for vibration analysis (LabVIEW) and computer to display the result analysis also attached. The sample was in a free-free boundary condition and also excited by a shaker (BK4828). The frequency response function (FRFs) was examined using an Analyzer in a conventional modal testing procedure. 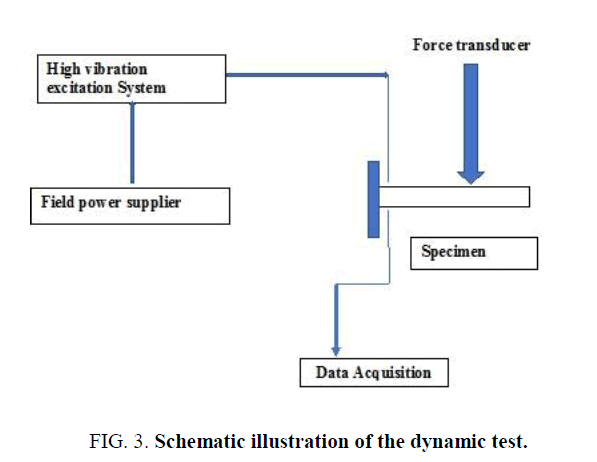 Tensile strength of the nanocomposites 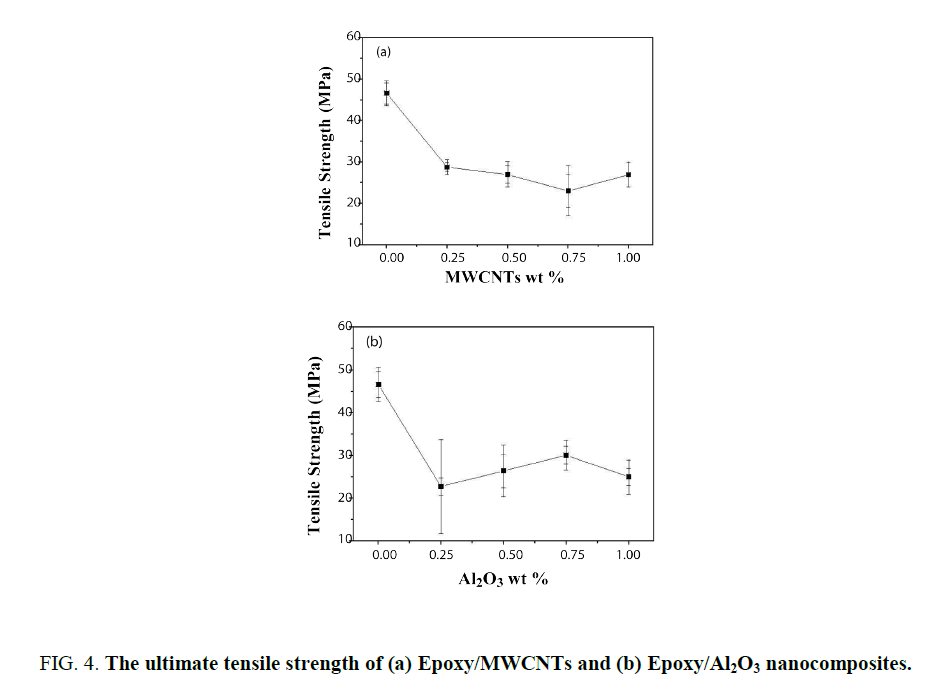 Figure 4: The ultimate tensile strength of (a) Epoxy/MWCNTs and (b) Epoxy/Al2O3 nanocomposites.

Figure 6 (a) and (b) shows the stress strain behavior of Epoxy/MWCNTs and Epoxy/Al2O3 nanocomposites. The results show that the breaking strain was declined with the nanofillers addition. Little effect in breaking strain was observed for excess wt. % of nanofillers as shown in Figure 5 (a) and (b). The reduction in strain might be due to incorporation of rigid nanofillers into a polymeric matrix; this indicates the brittle behavior of the nanocomposites due the formation of nano defect results in regional stress concentration in the matrix. 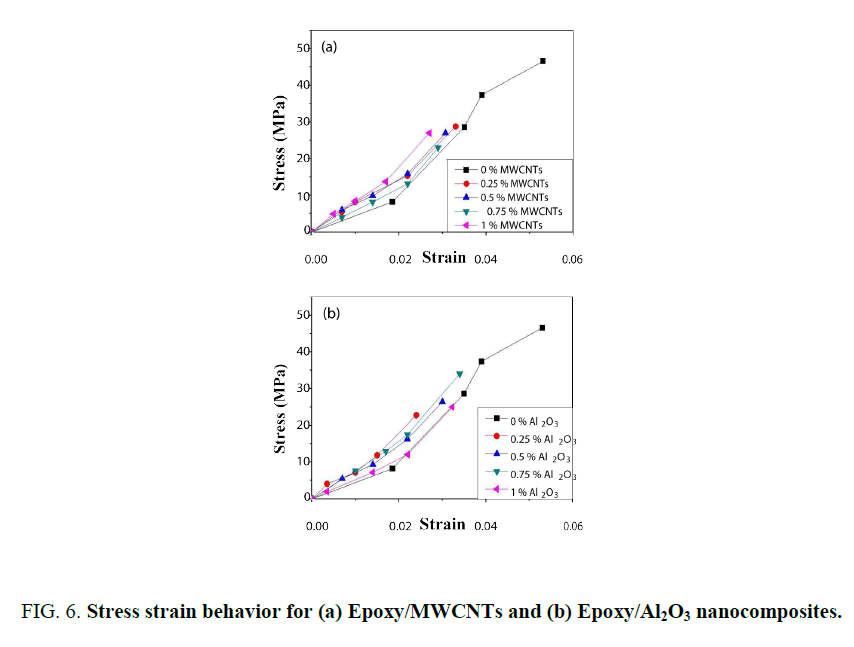 Impact energy of the nanocomposites 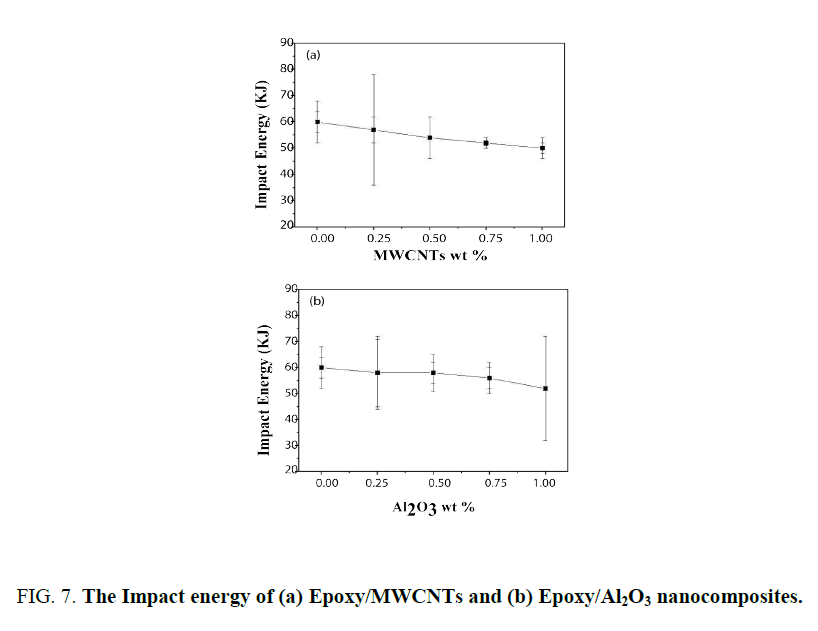 Figure 7: The Impact energy of (a) Epoxy/MWCNTs and (b) Epoxy/Al2O3 nanocomposites.

Figure 8: The average values of impact energy for Epoxy/MWCNTs and Epoxy/Al2O3 nanocomposites.

The addition of MWCNTs tends to reduce the impact strength of the neat Epoxy. This may be due to the brittleness of the MWCNTs, their capability to form agglomerates, which caused stress concentrations. Similar results have been observed by Haiyan et al. [22]. Declined of Impact behaviour with addition of nanofillers may be explained that a polymer matrix with nanofillers loading has weak ability to absorb impact energy. This phenomenon is due to matrix continuity is interrupted by the fillers, and each fillers is a position of stress concentration, which can act as crack initiator and decrease the adhesion and ability of composite to absorb energy [15]. Figure 10 (a) and (b) shows the fracture behavior of Epoxy/0.25 MWCNTs and Epoxy/1 MWCNTs, respectively, the fracture surface becomes rough, as the surface indicates; a good random distribution of MWCNTs into the Epoxy matrix was achieved. The rough fracture surface of the Epoxy/MWCNTs nanocomposites is due to the crack propagation which prevents the transformation of stress from the matrix to the reinforcement. These cracks reduce the tensile strength of the nanocomposites with respect to the neat resin. Figure 10 (c) shows the EDS spectrum of MWCNTs nanocomposites, it was seen that the elements of MWCNTs with a wrapping layer contain calcium, carbon, oxygen and gold from the coating process. The agglomeration of impurities of calcium may cause reduction in tensile behaviour of the nanocomposites. Figure 11. (a) and (b) shows the SEM micrographs of Epoxy/0.25% Al2O3 and Epoxy/1% Al2O3 nanocomposite, respectively. It can be noted that the brighter zone reflected the Al2O3 nanofiller while, the grey zone is the Epoxy matrix. When 0.25 wt% of nanoparticles was added into the composite, mostly area covered with the polymer phase as seen in Figure 11 (a). However, distribution of Al2O3 nanoparticles can be obtained when the content of Al2O3 nanoparticles is increased for 1 wt% as illustrated in Figure 11 (b). Figure 11 (c) shows the EDS spectrum of Al2O3 nanocomposites, it was seen that the elements of Al2O3 with very small amounts of calcium, carbon, oxygen and gold from the coating process. 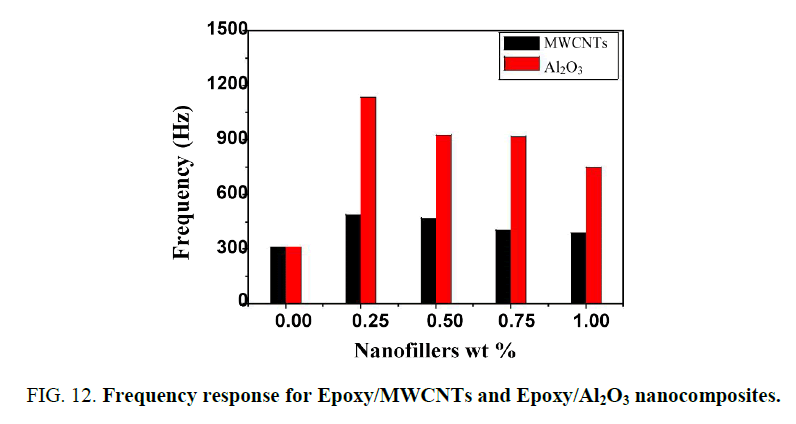 Variation of damping ratios of the nanocomposites with addition of nanofillers wt% are illustrated in Figure 13. It can be observed that the damping ratio decreased with addition of MWCNTs and Al2O3 nanoparticles to the Epoxy matrix. MWCNTs enhanced the bonding between the Epoxy resin and nanotubes causing reduction in the ability to dissipate energy and improvement in the stiffness. Good adhesion between Al2O3 nanoparticles and Epoxy matrix caused less dissipation of energy and a smaller damping ratio for the nanocomposites [5]. These results are reflected by the mechanical results shown in Figure 6 and 8. 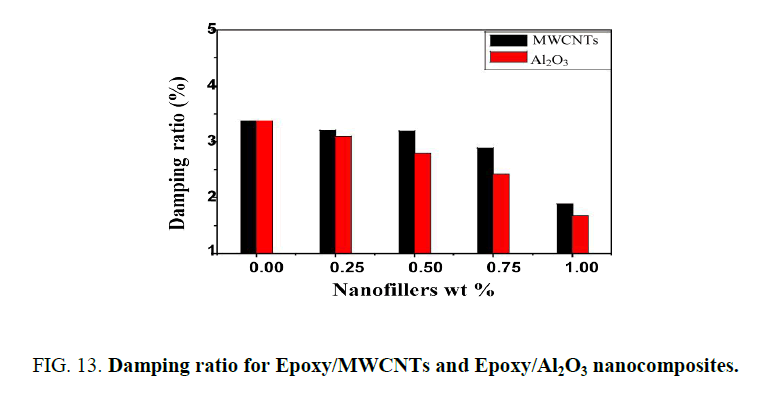 The authors are thankful to Shoubra Faculty of Engineering, Benha University for providing financial and technical support for carrying out this study.