The kinetics and mechanism of oxidation of sulfanilic acid by thallium (III) in acid perchlorate medium have been studied. The reaction exhibits first order with respect to oxidant whereas order with respect to sulfanilic acid is complex. The rate is retarded by hydrogen ion concentration. Accounting for all such observations, a plausible reaction mechanism has been suggested. The activation parameters such as energy and entropy of activation have also been calculated to be (37.61 ± 0.3) kJ mol-1 and (-157.9 ± 1.6) JK-1 mol-1 respectively employing Eyring equation.

Sulfanilic acid (p-amino benzene sulfonic acid) is considered to be an important reagent in synthesis of organic dyes [1]. The substituted sulfanilic acid such as sulfonamides is finding extensive applications in synthesis of sulfa drugs [2,3]. A large number of oxidants such as cerium (IV) [4], persulfate [5,6], hydrogen peroxide [7], periodate [8-11], peroxomonophosfate [12,13] and peroxydisulfate [6] have been employed to understand the mechanism of oxidation of the acid. However, there are certain ambiguities in kinetic analysis of the ruthenium (III) and osmium (VIII) catalyzed oxidations respectively of this acid in certain oxidation reactions particularly catalytic oxidation of sulfanilic acid by hexacyanoferrate (III) both in acid and alkaline media.

Thallium (III) considered being an important two-equivalent oxidant has been employed in a large number of kinetic studies [14-17]. Since thallium (II) to be an intermediate in its oxidations in one-equivalent change is also reported, evidence has been adduced and now it is well matured in its oxidation reactions as reactions employing thallium (II) has also been reported. Since we are engaged with kinetic studies of oxidations by thallium (III) in our laboratory [18-30], it is thought proper to study the oxidation reaction of sulfanilic acid by employing this oxidant in view of the purpose whether or not the oxidation reaction takes place via complex formation between oxidant and substrate. Secondly, is there any possibility of finding an intervention of thallium (II) as an intermediate! Also, thallium (III) is known to form strong chlorothallium (III) complexes; the pattern of reactivity of such complexes towards sulfanilic acid is supposed to provide useful information of the reaction mechanism.

Thallic oxide (Acros) was employed for the preparation of thallic perchlorate solution. Thallic oxide (Tl2O3) in a black powder form was added in small lots into heated 70% perchloric acid (E. Merck, 70%) and heating was continued until solution becomes colourless. Other reagents and their preparations have already been mentioned elsewhere. Aqueous solution of sulfanilic acid (E Merck) was prepared by dissolving the requisite amount in doubly distilled water and the solution was kept in bottles painted black from the outside at refrigerated temperature ( ~ 5°C) to eliminate decomposition due to diffused photo light. However, it was observed that the solution of sulfanilic acid did not degrade even at ambient temperature ascribing stability of such a solution to be quite appreciable. Further, it has also been observed that the solution of sulfanilic acid is stabilized by addition of small amount of very dilute alkali solution. This is probably due to the presence of –NH3+ and –SO3- groups in the structure of sulfanilic acid as a zwitter ion [3]. In alkaline solution, the strongly basic hydroxide ion pulls hydrogen ion away from the weakly basic –NH2 group to yield the water-soluble p-aminobenzenesulfonate ion (II). Therefore, the solution of sulfanilic acid was prepared by dissolving appropriate amount of the sample in warm water adding very dilute alkaline solution.

Doubly distilled water was employed throughout the kinetics of the reaction; the second distillation was from an alkaline solution of KMnO4 in an apparatus of all glass. Other reagents were employed as supplied without any further treatment. Ru (III) was used by dissolving RuCl3 in dilute HCl (0.3 mol dm-3). Such a solution of Ru (III) was quite stable and stored in a bottle painted black from the outside to eliminate any further decomposition owing to diffused light.

Tl (I) being one of the reaction products was tested as yellow-orange precipitate of thallus iodide. However, the oxidation product of sulfanilic acid was spectrally identified and established to be N-hydroxylaminobenzene-4-sulphonic acid. The reaction product, N-hydroxylaminosulfonic acid was eluted by thin layer chromatography. Thin layer chromatograms were conducted on Merck silica gel G plates in methyl alcohol: ethyl acetate (8:2) and in the column chromatographic fractionations silica gel (60-120 mesh). Spots on TLC plates were visualized by spraying with 2% cerric ammonium sulfate in 2 N H2SO4 or with iodine vapors.

1HNMR spectrum was also obtained in DMSO-d6 employing 300 MHz spectrometer using TMS as reference NMR signal at δ4.039 (s) ppm is due to -NH group of amine. Two singlets are obtained at δ2.5 ppm and δ2.06 ppm showing the presence of -OH group. The mass spectrum of this product displayed a peak at m/z 187 after the loss of two hydrogens from its molecular ion at 189. The elemental analysis was in agreement with a molecular formula C6H7O4NS. The product N-hydroxyl amino sulfonic acid in acid medium does not undergo any further oxidation under the present kinetics conditions.

The plot of initial rate against the concentration of sulfanilic acid was made which initially shows a straight line passing through the origin and then tended towards a limiting rate at higher concentrations of the organic acid exhibiting variable order with respect to sulfanilic acid.

Effect of ionic strength (I) 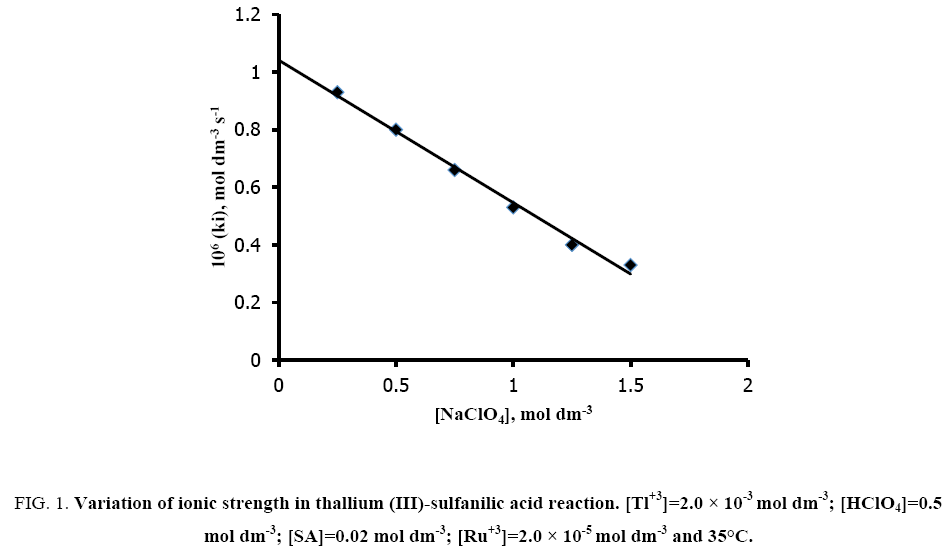 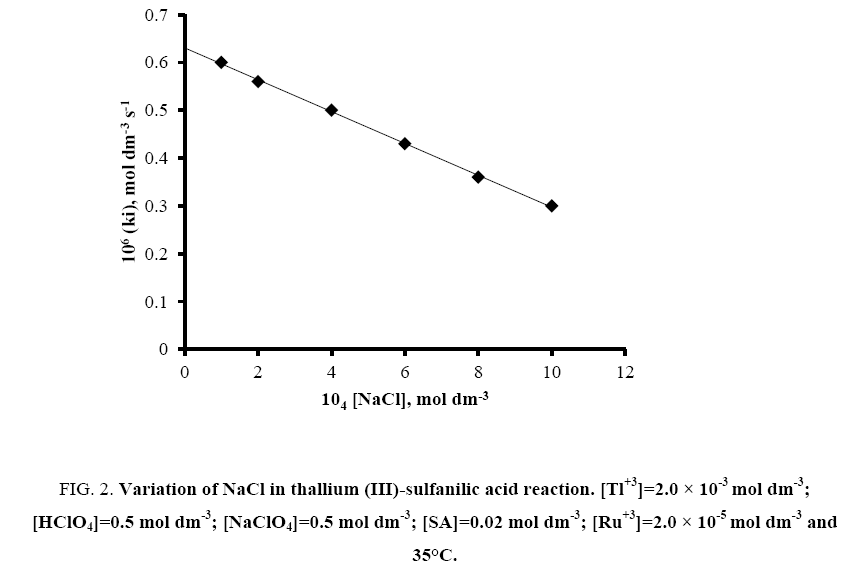 Effect of thallium (I)

The concentration of thallium (I) was varied from 1.0 × 10-3 to 5.0 × 10-3 mol dm-3 at fixed concentrations of other reaction ingredients. However, rate remains unchanged eliminating any fast equilibrium preceded by the rate determining step.

The test of free radicals in reaction mixture was also conducted by adding acrylic acid/acrylonitrile. However, no white sediment was observed during the progress of the reaction which eliminated the probability of polymerization of acrylic acid. Nonetheless, such an exclusive observation does not justify the absence of free radicals. There is every possibility of formation of free radicals in view of the energetically more facile one equivalent process. It appears that the free radicals as soon as are formed, they immediately react with the substrate before finding time to diffuse out of the solvent cage for polymerization.

Thallium (III) solutions in acid medium are sufficiently stable but in dilute acid hydrolysis becomes important as represented by eqn. (2).

The hydrolysis constant (Kh) has been reported [35,36] to be 0.086 at 25°C. Since the rate decreases with increasing hydrogen ion concentration, the hydrolyzed species TlOH2+ appears to be more reactive species than thallic ion (Tl3+ (aq)). Such an observation is not unique more particularly in view of the large number of thallium (III) reactions where hydrolyzed species has been reported to be the reactive species to account for observed hydrogen ion dependence [37]. So far sulfanilic acid is concerned; its protonated form is the only predominant species in the light of small dissociation constant at 25°C. Thus, sulfanilic acid species does not contribute to hydrogen ion dependence in the reaction.

If TlOH2+ to be the species of thallium (III) and sulfanilic acid (heretofore written as SA) are taken into account, the following mechanism consisting of steps (2) to (5) accounting for experimental observations can be envisaged.

Such a mechanism leads to the rate law (6)

[Tl (III)] and [SA] are the gross analytical and free equilibrium concentrations of thallium (III) and sulfanilic acid respectively. Since uncatalyzed path also simultaneously occurs, the rate law accounting for such a path can be given by eqn. (7).

Where, k'cat and k"un are first order rate constants for catalyzed and uncatalyzed paths. Since equilibrium constant K' for ternary complex is insignificant i.e kK=k’K’K”, the rate law (7) is further reduced to eqn. (8).

The double reciprocal of eqn. (8) on re-arrangement yields eqn. (9). 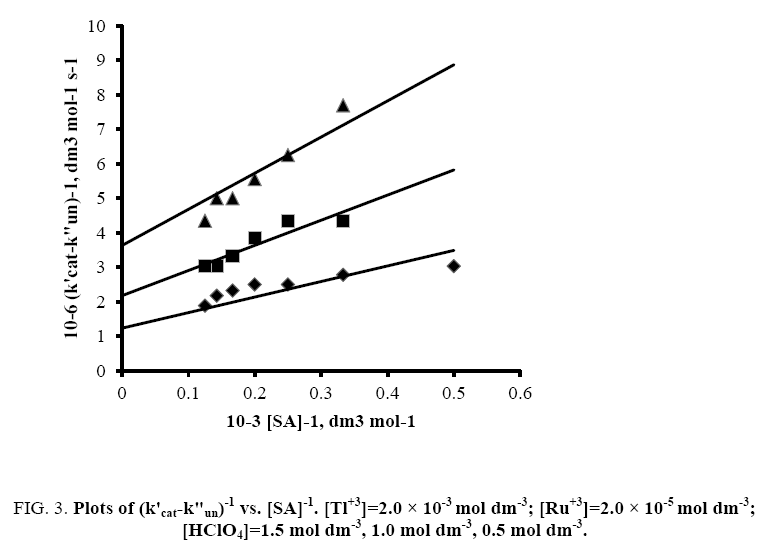 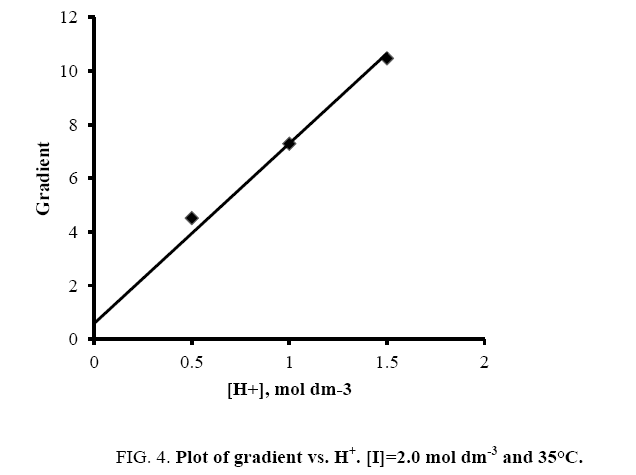 The activation parameters such as energy and entropy of activation calculated by employing Eyring equations are (37.61 ± 0.3) kJ mol-1 and (-157.9 ± 1.6) JK-1 mol-1 respectively. The lower energy of activation is in favor of formation of an intermediate complex. The (-) ve entropy of activation favors more compact transition state. So far, the proposed intermediate complex in step (3) of the reaction mechanism is concerned; kinetic evidence supports such a proposal. Further thallium (III) is transparent in visible spectral region, no such complex was observed between oxidant and substrate spectrally. However, a slight shift in UV region at 210 nm of the oxidant on addition of the substrate might be an indication of complexation. Nevertheless, rate of the reaction is strongly retarded by chloride ion concentration. Such an observation might be taken as strong indirect evidence to favor the formation of an intermediate complex between thallium (III) and sulfanilic acid.

Chloride ions are known [38] to form quantitatively strong chloro-thallium (III) complexes in a successive manner as follows where K1>K2>K3>K4.

The rate of disproportionate [41,42] of thallium (II) is much larger than that of electron transfer reactions (16, 17).

Had it not been the situation, Tl (II) would have been trapped by a monomer. The standard oxidation potential [43] (vs. NHE) for TIII/TII redox couple (3.14 V) is much larger than that of TlIII/TlI redox couple (1.45 V), showing Tl (II) to be a much stronger oxidant than Tl (III). As soon as thallium (II) is formed as an intermediate, in all probability it remains in the solvent cage and immediately attacks the substrate before it comes out of the cage for polymerization of the monomer.

Thallium (III) is substitution labile in view of high exchange rate [44,45] of water for aqua thallium (III) (~ 3 × 108 s-1). Thus, the substitution rate of aqua ligand by sulfanilic acid must be much higher than the observed exchange rate for thallium (III)- sulfanilic acid complex formation to be the rate controlling step. Since this is not an observed situation in the title reaction, the reaction in all probability is redox controlled and not substitution controlled [46,47]. So far the mode of electron transfer from the substrate to the oxidant is concerned; the reaction events can be understood by the following SCHEME 1. 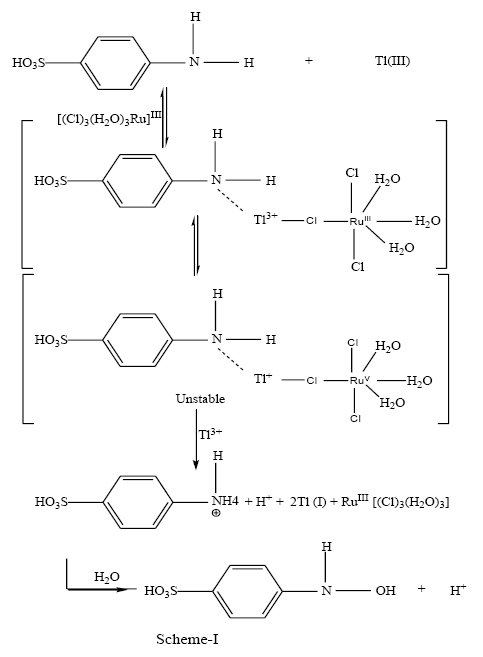 Therefore, the proposals as suggested on the premise of experimental observations are more logical in the light of the following observations:

If oxidation potentials of Tl3+/Tl+ and Tl2+/T+ redox couples are taken into account, Tl (II) is certainly a stronger oxidant than thallium (III). It is, therefore, probable that Tl (II) intermediate, in the solvent cage to immediately reacts with substrate free radical. This appears to be the reason of not finding free radical formation in the reaction kinetics. Since the reaction in all probability is redox controlled and not substitution controlled.

Rate of the reaction is strongly retarded by chloride ion concentration. Such an observation might be taken as strong indirect evidence to favor the formation of an intermediate complex between thallium (III) and sulfanilic acid.

This work was supported in part by the University Grant Commission, New Delhi, India through senior research fellowship for financial support. Acknowledgment is also made to the co-authors and Head of Department of Chemistry, UOR, Jaipur, Rajasthan, India.