A new series of complexes has been synthesized by template condensation of 2-aminoethanthiol and diaryltellurium dichlorides, R2TeCl2 (R=p-hydroxyphenyl and 3-methyl-4-hydroxyphenyl) in methanolic medium in the presence of divalent metal chlorides forming complexes of the type [ML1Cl2] and [ML2Cl2] where [M=Mn (II), Co (II) and Cu (II); L1 and L2=10-membered tellurium containing dithiadiaza macrocyclic ligands]. On the basis of elemental analyses, conductance, magnetic moment measurements, 1HNMR, Infrared and electronic absorption spectroscopy their structures have been elucidated. Based on these studies, a six coordinate octahedral geometry for these complexes have been proposed. These metal complexes have also been screened for their antimicrobial activity against some pathogenic bacteria and fungi.

Coordination chemistry of organotellurium ligands containing hard donors such as nitrogen and oxygen along with soft tellurium is quite interesting as such ligand framework can provide insight into a competitive coordination behaviour between the hard and soft donors towards the metal center [1,2]. Some macrocyclic complexes have received special attention due to their mixed hard-soft donor character and versatile coordination behavior [3] and also due to their pharmacological properties [4].

The macrocyclic complexes have various applications such as dyes and pigments [5], biological activity [4,6,7], precursors in MOCVD processes [8-10], models for biologically important proteins and enzymes [11-16]. Template synthetic route for transition metal complexes of dithiadiaza 16 and tellurium containing tetraaza [17-21] macrocycles have been reported. Due to the growing interest in macrocyclic metal complexes and in continuation of our earlier research work [22,23] we herein report the synthesis, characterization and antimicrobial activity of some 10-membered tellurium containing dithiadiaza macrocyclic complexes of divalent cobalt, manganese and copper.

The chemicals used for synthesis and recrystallization were of reagent grade. The solvents, phenol and o-cresol were purified and dried by standard methods [24,25] before use. All the preparations were carried out under an atmosphere of dry nitrogen as the compounds are sensitive to moisture and air.

Bis (3-methyl-4-hydroxyphenyl) and bis (p-hydroxyphenyl) tellurium dichlorides were prepared by reactions of tellurium tetrachloride with o-cresol [26] and phenol [27] respectively, as reported in the literature.

The metal complexes were synthesized by template condensation of diaryltellurium dichlorides and 2-aminoethanthiol in presence of divalent metal chlorides in 2:2:1 molar ratios, as per the procedure given below:

A hot saturated solution (4.0 mmol) of diaryltellurium dichloride in dry methanol was added dropwise with constant stirring to a hot solution (4.0 mmol) of 2-aminoethanthiol in methanol taken in a round bottom flask. An immediate change in colour was observed. The contents were refluxed for 4-5 h, followed by the addition of hot saturated methanolic solution of divalent metal chlorides (2.0 mmol). Again, a change in colour was observed. The mixture was then further refluxed for about 7-8 h. This was kept in refrigerator after concentrating to about one third of original volume to obtain the crystalline coloured product. This was filtered, washed with petroleum ether and dried in vacuum desiccator over P4O10.

When tellurium tetrachloride is heated with arene, R-H (o-cresol and phenol) gives corresponding diaryltellurium dichlorides [26,27] as per the equation:

These diaryltellurium dichlorides when heated with 2-aminoethanthiol in presence of CoCl2.6H2O/CuCl2/MnCl2.4H2O in 2:2:1 molar ratios yield the desired complexes as shown in Scheme 1. 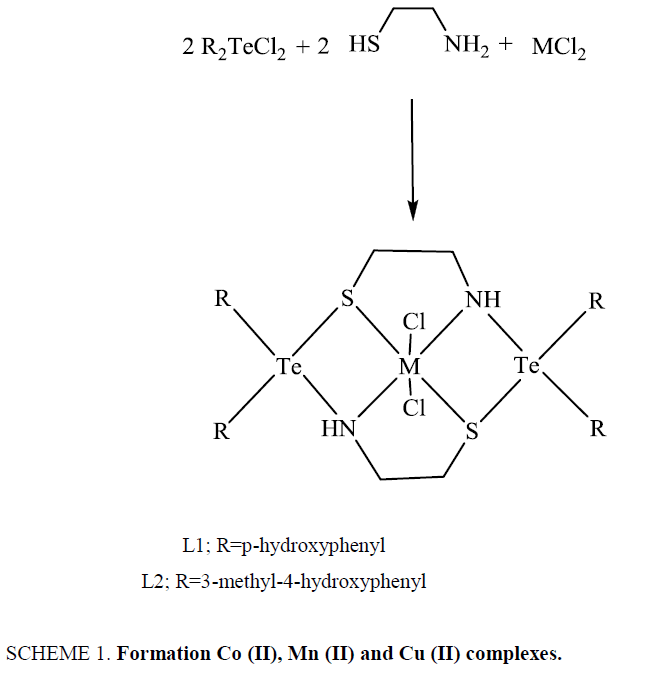 The analytical data for these complexes are presented in Table 1. These newly synthesized metal complexes are colored, crystalline solids which are stable in dry air and soluble in polar donor organic solvents.

The Mn (II) complexes show magnetic moment corresponding to five unpaired electrons (5.62-5.82 B.M.) at room temperature close to the spin only value of 5.92 B. M. Electronic spectra exhibit two weak absorption bands as shown in Table 3, which are characteristics of octahedral geometry [18,19,21,32-34].

The important IR data along with their assignments are presented in Table 4. The metal complexes under study did not show any band corresponding to free amino group; instead a new single sharp band appeared in the region 3100 cm-1-3200 cm-1 (sometimes mixed with O-H) assignable to vN-H vibration [19,20,40,41] provide an evidence for the skeleton of the macrocyclic moiety. This was further supported by appearance of medium to strong intensity band at 1615 cm-1–1651 cm-1 and 811 cm-1-826 cm-1 attributed to N-H deformations coupled with N-H out of plane bending vibrations41. Medium to weak intensity bands at ~1175 cm-1 and 460 cm-1-516 cm-1 may be assigned to C-N stretching vibration19,42,43 and M-N stretching16-18,44,45 respectively.

The proton chemical shifts for the metal complexes in DMSO–d6 are presented in Table 4. Phenyl protons in the metal complexes resonate at slightly upfield side (6.49-7.76 δ ppm) as compared to the parent diaryltellurium dichlorides [26,27] due to replacement of 2 Cl by 2 nitrogen atoms and hence increase in electron density at the tellurium atom. 2-aminoethanthiol, H2N-CH2-CH2-SH, exhibits proton chemical shifts at 1.45 (2H), 2.50 (1H), 2.75 (2H) and 2.87 (2H) δ ppm due to amino, thiol, methylene (adjacent to N) and methylene (adjacent to S) groups respectively [51,52].

A broad singlet in all the complexes at 1.65-2.10 δ ppm assignable to coordinated secondary amino group [16-18] confirms the formation of macrocyclic skeleton. Triplets in all the complexes at 2.95-3.07 and 3.12-3.19 δ ppm (slightly downfield side) may be assigned to (S-CH2; 4H) and (N-CH2; 4H) respectively, of the 2-aminoethanethiol moiety. All the above along with the absence of any band characteristic of NH2 or SH protons, support the proposed macrocyclic framework.

Further, the independence of chemical shifts of aryl protons on the metal ions, hints at non-participation of Te atoms of the macrocycle in coordination with the metal ions. Thus, proton NMR studies support the formation of 10-membered tellurium containing dithiadiaza macrocycles and their quadridentate behavior as predicted by IR studies.

Based on elemental analyses, conductance, magnetic, infrared, electronic and proton magnetic resonance spectral studies, a distorted octahedral geometry involving two N and two S of the dithiadiaza macrocycle and 2 Cl may be proposed for these metal complexes (Figure 1).

The results are compiled in Tables 5 and 6. MIC values indicate that the complexes possess moderate antimicrobial activity as compared to the standard bactericide (Cefadroxil) and fungicide (Fluconazole) but all the complexes show better antimicrobial activity than their precursors and thus indicated that complexation to metal enhances the activity of the ligand. The complex [MnL1Cl2] shows good activity against C. albicans (MIC=6.25) while [MnL2Cl2] is found to be most active against s (MIC=6.25) and C. albicans (MIC=6.25).

Table 5: Minimum Inhibitory Concentration (MIC) of the complexes against bacteria.

Table 6: Minimum Inhibitory Concentration (MIC) of the complexes against fungi.

Co (II), Mn (II) and Cu (II) complexes have been synthesized by template condensation of diaryltellurium dichlorides with 2-aminoethanthiol in presence of metal chlorides and characterized by elemental analyses, molar conductance, electronic absorption, IR and 1H NMR spectral studies. Based on these studies, a distorted octahedral structure has been assigned to these complexes. Some Mn (II) complexes show good antimicrobial activity against some pathogenic bacteria and fungi while others are moderately active.