This article reports the antiplasmodial activities of n-hexane, ethyl acetate and methanol extracts of latexes belonging to three Indian Euphorbia species, namely Euphorbia antiquorum, E. nerifolia and E. tirucalli against chloroquine-resistant (K1) strain of Plasmodium falciparum. Chloroquine diphosphate was used as positive control. Out of screened extracts, only the n-hexane extract of E. tirucalli was found to have significant activity with IC50=8 ± 2.7 μg/mL. These results support the traditional usage of E. tirucalli in the treatment of severe fevers (or) malaria and therefore, is worthy of further investigation.

Malaria is a life-threatening parasitic disease transmitted by female Anopheles mosquitoes. According to the World Malaria Report 2012 [1], a significant reduction in malaria incidence and mortality found in half of the malaria endemic countries, but, these countries account for only 3% of the total estimated malaria cases i.e., about 219 million cases (range 154-289 million) per every year world-wide. Of which, 40% of cases were found in the Democratic Republic of the Congo, India and Nigeria. About 660 000 deaths (range 490,000-836,000) estimated to occur every year globally, of which, 90% deaths are occur in the WHO African Region (sub-Saharan Africa), with children under five years of age and pregnant women most severely affected. According to the “National Health Profile, 2015” of India, the number of cases as well as deaths due to the disease dropped significantly every year between 2010 and 2013. But, they again elevated between 2013 and 2014. India recorded an estimated 535 malaria deaths in 2014, as compared to 440 in 2013. Malaria cases also rose from 881 730 to 1 070 513 between 2013 and 2014 [2]. The World Malaria Report also notes that resistance of Plasmodium falciparum to artemisinin and its derivatives, the key compounds in artemisinin-based combination therapies (ACTs), has been detected in four South East Asian countries, in addition to existing chloroquine resistance. Hence, due to the importance given to public health throughout the world, creating a new antimalarial drug is imperative and beneficial. The majority of natural products or derivatives of natural products in clinical use today originated from traditional medicinal plants. More than 150 constituents from higher plants with significant antiplasmodial activities have been reported during the last ten years and a number of semi-synthetic derivatives of artemisinin are now in clinical use. At the same time, there has been a new interest in the development of herbal antimalarials as a source of affordable and effective treatments for malaria [3].

Euphorbia is one of the most important genera of the Euphorbiaceae. The species of Euphorbiaceae are extensively used as a folk remedy in many countries around the world to cure numerous diseases such as cancer, epithelioma, sarcoma, skin tumours, diabetes, diarrhoea, heart diseases, hemorrhages, hepatitis, jaundice, malaria, ophthalmic diseases, rheumatism, scabies, asthma, cough, earache and etc., [4-6]. Especially, the latexes of three species out of 68 species found in India, namely E. antiquorum L., E. nerifolia L. and E. tirucalli L., are extensively used in the Indian system of medicine, such as Ayurveda and Siddha to treat a variety of diseases including severe fevers [7-9]. In view of our special interest in developing antimalarials [3], these euphorbia latexes have been collected and subjected for anti-plasmodial screening.

A survey has been carried out in and around Visakhapatnam region (17°69' N, 83°22' E) to identify the latex species of Euphorbia during July-August 2014. The species viz. E. antiquorum L., E. nerifolia L. and E. tirucalli L. were identified for antimalarial screening. The identity of these plants was confirmed by a taxonomist and voucher specimens (140801, 140802 and 140701, respectively) were kept available in the Central Research Laboratory, GIT, GITAM University, Visakhapatnam, India. The fresh latexes from the above plants were collected by tapping individually from their respective single plant sources during morning and evening hours.

Crude extracts and control drugs stock solutions (1 mg/mL) were prepared by weighing 1 mg accurately, dissolved in 50 μL of dimethyl sulphoxide (DMSO) or ethanol and made up to 1 mL with double distilled water. Later these solutions were diluted in complete medium.

Solvents are analytical grade of Merck and all other the materials for the antiplasmodial assays were purchased from Sigma-Aldrich.

The latexes of Euphorbia nerifolia L., E. antiquorum L. and E. tirucalli L. are popularly known by the common name Snuhi and they are milky in nature and difficult to distinguish, morphologically. The collected fresh latexes (10 g each) from the above plants were subjected for extraction and the concentrated extracts were recorded in percentages in TABLE 1. The n-hexane extract was yielded in maximum quantity (16%-45%) by all latexes, whereas ethyl acetate and methanol extracts were obtained as negligible quantities. In the present study, these extracts were subjected for antiplasmodial screening for the first time. The activities of the extracts and control drugs are shown in TABLE 1. The data is expressed as the mean ± standard deviation of the IC50 of three independent experiments on different days. Only the n-hexane extract of E. tirucalli was possessed activity against P. falciparum (strain K1) with significant IC50=8 ± 2.7 μg/mL value and other extracts are found to be inactive (IC50>500 μg/mL). The antiplasmodial activity of E. tirucalli supports its usage in the traditional treatment for severe fevers/malaria [4].

In addition to present activity, anti-arthritic, antimicrobial, antiviral, anti-herpetic, anti-oxidant, hepatoprotective, proteolytic, anticancer, molluscidal and larvicidal activities are also seen in earlier studies due to a great variety of chemical substances found in E. tirucalli besides its distinct medical folklore claims of different parts of the world [4,10]. The characteristic constituents of E. tirucalli are triterpenes, however, diterpenes, tannins and other class of compounds were also reported. The latex of this plant was reported to contain euphol, taraxasterol, tirucallol [11], 31-nortriterpene, cycloeuphordenol, cyclotirucanenol [11-13], lupeol, esters of (euphol and tirucallol), acetates of (euphol, tirucallol and lupeol), lupenone, friedelin, glutinol [14], euphorbinol and cycloeuphornol [15,16].

A study by Ziegler [17] confirmed that lupeol has an indirect action as it causes a transformation of the human erythrocyte shape toward that of stomatocytes and made the cells unsuitable for parasite growth. Friedelin was also reported to have potent antiplasmodial activity in-vitro with IC50 value 7.2 ± 0.5 μM against chloroquine resistant strain (W2) of P. falciparum. [20] The presence of these two compounds (FIG. 1) may explain the antiplasmodial activity of E. tirucalli found in the present study. However, a detailed phytochemical investigation is required to find the constituents responsible for the activity. 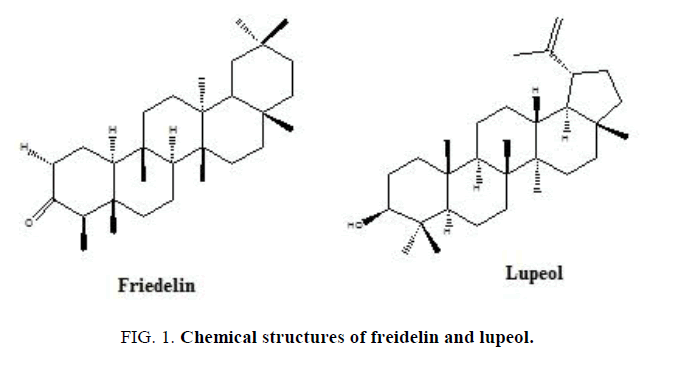 The latexes of E. antiquorum, E. nerifolia and E. tirucalli were screened for antiplasmodial activity for the first time and E. tirucalli was found to be active with IC50=8 ± 2.7 μg/mL against chloroquine-resistant (K1) strain of Plasmodium falciparum. This activity supports the traditional usage of E. tirucalli in the treatment of severe fevers/malaria. Therefore, further studies need to be done to isolate and characterize active constituents of extract.

Authors expresses their gratitude to the University Grants Commission (UGC), the Government of India, for financial support received [Reference No: F.No:42-344/2013(SR), dated 22.03.2013]. Also, we thank Dr. Colin W. Wright, Head and Reader in Pharmacognosy, Bradford School of Pharmacy, University of Bradford, UK for his support. 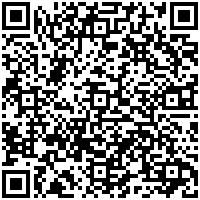