In the present research, we have made a survey on the influence of γ-rays (60Co sources) on the activity and selectivity of Pd/γ-Al2O3 (0,5-5% Pd) in the reaction of liquid phase hydrogenation of cyclohexene, nitrobenzol and phenylacetylene. The samples Pd/γ-Al2O3 have been prepared by impregnating method γ-Al2O3, previously calcined at 500°C for 4 hours with an aqueous solution of palladium chloride, followed by drying at 250°C. The resulting samples were recovered in a hydrogen stream for 2 hours at 500°C. The hydrogenation of unsaturated compounds was conducted in a thermo stated glass reactor-a catalyst "duck" in 96% ethanol at 10, 20, 30 and 40âÂÂ ÂÂ with simultaneous measuring of the catalyst potential during the reaction relative to the saturated calomel half-cell.

Al2O3 is widely used as a carrier for various catalysts [1]. In their works Morterra and Magnacca [2] considered the alumina treated surface for distribution and condition of the active components and catalytic activity in various reactions; high thermal stability has been also investigated which characterizes aluminium oxide [3]. In the works [4,5] they pay much attention to the efficiency of the catalyst. Al2O3 contains a certain proportion of cationic vacancies (Al8[Al13(1/3)2(2/3)]O32) [6]. The deposition of precious metals on Al2O3 has determined its oxidation-reduction interaction. The precious metal in Pd(Pt)/Al2O3, according to the data, can exist in at least two different states. In the works of Otto and other authors they used XPS [7-9] and Raman spectroscopy [10], and showed that palladium has two different states on the surface of Pd/Al2O3 samples.

With low concentrations of palladium, we have obtained similar results for the samples Pd/Al2O3 Gigola [11,12]. Similar results [9,13] were obtained for Pt/Al2O3 system. Al2O3 supports the effect of the displacement of the phase transition temperature Pd-PDO. The carrier has a significant effect on the phase transformation, most likely due to the effects of the interaction between the metals (or metal oxide) [14,15].

The nature of the interaction of the metal-carrier in Pd/Al2O3 and the catalysts / Al2O3 Pt is still not well understood. Several constructions have been proposed for the interaction of Pd with the Al2O3 surface. The formation of a two-dimensional surface complex [16] includes the formation of the palladium-aluminate phase due to the stabilization of active cations in EXAFS [17] and the stabilization of palladium in the form of PDO2 [9]. In the Pt/Al2O3 system, the interaction between Pt and Al2O3 can result in dissolution of PtO2 in Al2O3 surface layers or formation of PtO2• Al2O3 [13]. Until now, the nature of the interaction between the active component of Pd/Al2O3 and the Pt/Al2O3 systems and the action of CO+O2 has not been studied in detail. Our investigation shows [18-23], that palladium can be re-dispersed or agglomerated under oxidizing treatments.

The hydrogenation of unsaturated compounds was conducted in a thermo stated glass reactor known as catalyst "urinal" in 96% ethanol at 10°C, 20°C, 30°C and 40°C with the simultaneous measuring of catalyst’s potential during the reaction of the relatively saturated calomel semi element [3].

Figure. 1 illustrates the kinetic and potentiometric curves of cyclohexene and nitrobenzene’s hydrogenation at Pd/γ-Al2O3 (5% Pd), prepared with the usage of various methods at a 20°C.

In accordance with Figure. 1, the hydrogenation of cyclohexene and nitrobenzene on the unirradiated (curves 1 and 4) and irradiated (curves 2, 3, 5, 6 and 7) samples of Pd/γ-Al2O3 are carried out according to the zero order. This is also supported by the fact that the speed of hydrogenation of these compounds does not depend on the change in their concentration (within the limits equivalent to the absorption of 50-200 ml H2). The speed rate of cyclohexene’s reduction on Pd/γ-Al2O3 irradiated by method 3 (curve 2) is 1.8 times higher, and by method 2 (Curve 3) is 2.5 times higher in comparison with the speed rate observed on the unirradiated catalyst (Curve 1). In case of the nitrobenzene’s hydrogenation, Pd/γ-Al2O3 irradiated according to the methods 2 and 4, also shows a higher activity (2-2.2-fold) than the unirradiated sample [24]. It can be noted here that higher speed of the process corresponds to a more anodic displacement of the catalyst’s potential (curves 3 and 6), which in its turn indicates to the more reactive nature of hydrogen sorbed on irradiated γ-quanta Pd/γ-Al2O3.

Figure. 2 illustrates the kinetic and potentiometric curves of hydrogenation of unsaturated connections on 5% Pt/γ-Al2O3 samples unirradiated and irradiated with a dose of 33 krad at 20°C. As the figure suggests, the speed rate of hydrogenation in the irradiated catalysts is 1.5 to 2.2 times higher than in the unirradiated ones, depending on the nature of the connections to be hydrogenated, wherein the shape of the kinetic and potentiometric curves is not replaced. 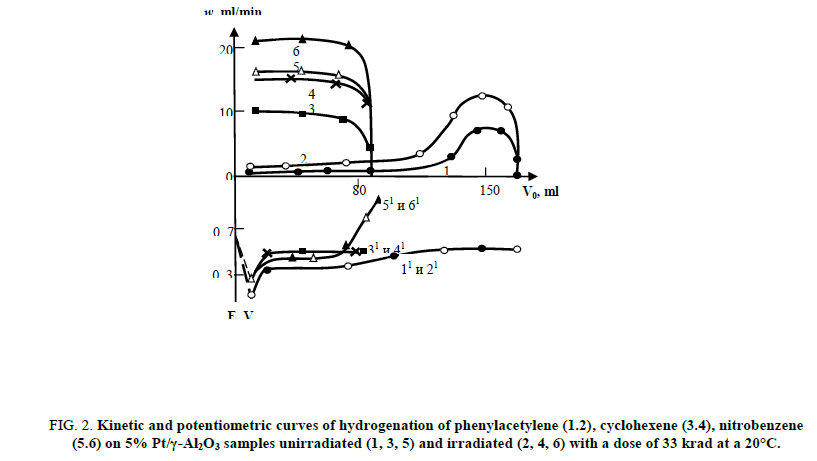 Selectivity of irradiated catalyst constitutes 74% and this value is lower in comparison with the unirradiated sample by 10%. It should be noted that, when the temperature of hydrogenation is raised up to 40°C the reaction proceeds at a faster rate, but due to some annealing of active centers the effect of radiation is reduced. Since annealing is an activation process, then with an increase of the reaction’s temperature, steady-state concentration of the active centers, arising under the influence of radiation on the surface of the catalyst, will accordingly decrease. The correlation between 5% Pt/γ-Al2O3 activity and dose of radiation remains constant at a dosage range of 30 to 100 krad, then the activity of the catalyst declines with an increase of the irradiation dose almost to its initial value.

However, the selectivity of the process in the case of the hydrogenation of phenylacetylene irradiated at a dose of 11 krad catalyst is higher than the unirradiated and constitutes 96%.

The positive effects resulting from irradiation with γ-quanta are achieved by hydrogenation of phenylacetylene to Pd/γ-Al2O3 as well. (Figure. 3). As the FIG shows, the change in the course of the kinetic (1 and 2) and potentiometric curves (1’, 2’) comes after one Mole of hydrogen absorption, which indicates to the selectivity of the process. The reduction speed of C≡C and C=C ties irradiated by catalyst of method 2 is 1.7 times higher, but, as shown by the results of the chromatographic analysis, the selectivity of the process is lower (S=76%) than in the unirradiated ones (S=88 %). 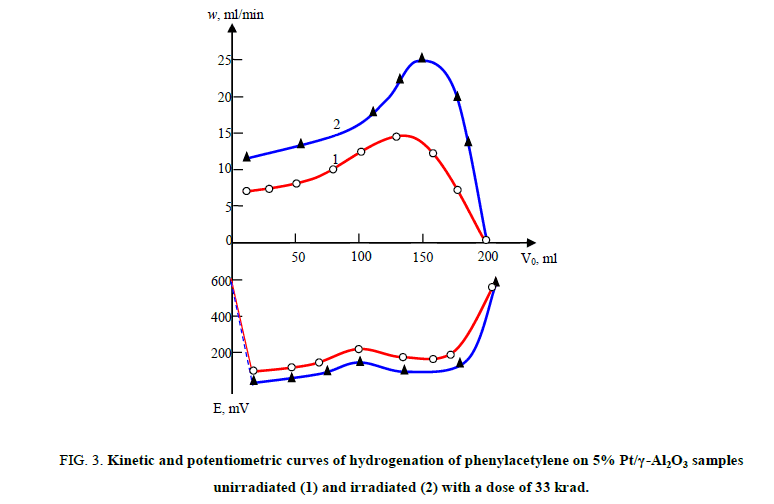 Figure 3: Kinetic and potentiometric curves of hydrogenation of phenylacetylene on 5% Pt/γ-Al2O3 samples unirradiated (1) and irradiated (2) with a dose of 33 krad.

The observed radiation effect depends on the radiation dose of the catalyst (Figure. 4). The greatest effect is shown by Pd/γ-Al2O3, irradiated with a dose of 40-70 krad, depending on the nature of these hydrogenated compounds. It should be noted that the rate of hydrogenation of nitrobenzene and phenylacetylene by the catalyst irradiated with a dose of 8 Mrad, is greater than the unirradiated sample, while reduction speed of C=C ties decreases rapidly to the initial value [25].

Figure 4: The hydrogenation of cyclohexene (1), nitrobenzene (2) of styrene (3) and phenylacetylene (4) 5% Pd/γ-Al2O3, irradiated with different doses of γ-quanta.

This pattern makes it possible to adjust the selectivity of the process by varying the dose of the catalyst. Thus, the selectivity of the process for the hydrogenation of phenylacetylene on Pd/γ-Al2O3 irradiated with a dose of 8 Mrad increases from 76 to 96%. Table 1 shows the results of calculations of the amount of adsorbed and dissolved forms of hydrogen in accordance with the data of the charging curves unirradiated and irradiated with various doses of γ-quanta Pd/γ-Al2O3 at 20°C.

From the data of Table 1 follows that the total amount of hydrogen adsorbed on the irradiated catalyst increases, and when irradiated with a dose of 58 krad constitutes 23 ml of H2 per 1 g of Pd, i.e., which is almost twice as much as on the unirradiated catalyst. It can also be noted that as the radiation dose of the catalyst is increased by γ-quanta, the amount of dissolved hydrogen increases, the fraction of which determines the selectivity of the process.

Table 1. The amount of dissolved and adsorbed forms of hydrogen in the unirradiated and irradiated Pd/γ-Al2O3 at 20°C.

With an increase of the radiation’s dose, probably occurs a partial annealing of morphological and catalytic active centers, emerging under the influence of radiation and responsible for the adsorption and activation of loosely tied form of hydrogen with a catalyst’s surface, with is so necessary to saturate the C=C ties. Therefore, there is a sharp fluctuation in the selectivity of the process as a function of the radiation dose, although we can observe a correlation between the speed rate of hydrogenation of unsaturated compounds and the amount of hydrogen adsorbed by the catalyst [26].

It should be noted that the hydrogenation of unsaturated compounds on Pd/γ-Al2O3 unlike Pt/γ-Al2O3 the radiation effect is declined with a decrease of the active phase’s concentration (Tables 2 and 3).

Table 2. The hydrogenation of cyclohexene on Pd/γ-Al2O3 at 20°C.

Table 3. The hydrogenation of unsaturated compounds on the Pt/γ-Al2O3 at 20°C.

Overall, the observed radiation effect in the hydrogenation of unsaturated compounds depends on the dose and method of radiation with γ-quanta, the concentration of the active phase and nature of substances to be recovered as well as on the temperature of the reaction. By irradiating the catalyst with different doses, it is possible to stimulate and regulate the selectivity of the process.