Fluoride is present mostly in every water source with varying concentration. In fact, fluoride is required for the growth of the body, and drinking water is the largest contributor to the daily intake of fluoride. Fluoride permissible amount in drinking water is 0.6 mg/l to 1.5 mg/l. High fluoride level in drinking water makes water unfit for drinking and causes dental and skeletal fluorosis, a major health problem. Many countries of the World including India have been facing this problem of excessive fluoride concentration. The present study is conducted with the objective of knowing the status of the fluoride concentration in groundwater of Hisar city of Haryana state (India). In the present study, the relation between various water quality parameters is also studied. These quality parameters under study are electrical conductivity, pH, total dissolved salts, chloride, fluoride and sulphate. The results show that the majority of the samples have amount of fluoride more than WHO standards. This is the main reason of dental and skeletal fluorosis in the population of the city. The study also reveals that water quality in the city was found unsatisfactory for drinking purposes without any prior treatment.

Although water covers 70% of the earth, only 3% is usable by humans. The remaining is either unusable salt water or unavailable fresh water. Water is a commodity that is essential to all life on this planet, and it needs our help. It is our responsibility to not only conserve our water supply, but to clean it up as well. Although there is an abundance of ocean water, freshwater is very scanty.

Clean water is essentially important component in the interconnected ecological and socio-economic systems. 250 million people in the world are facing the acute shortage of water to meet daily needs. It is estimated that by 2025, 300 million population of world will reside in those areas where there will be severe scarcity of water. According to UNO “World Water Development Report-3” about 70% of pure water is used for irrigation purposes. Groundwater forms the largest fresh water buffer and deserves special attention related to its unique value for the total system. The need of the hour is to pay special attention on ground water quality, otherwise there could be dare consequences. Fluoride beyond desirable amounts (0.6 mg/l to 1.5 mg/l) in groundwater is a major problem in many parts of the world [1]. Providing water, with optimal fluoride concentration is the only way by which the generation yet to be born can be fully protected against the disease.

Fluoride enters the human body through food, water, industrial exposure and drugs. But drinking water is the major contributor contributing 75% to 90% of daily intake. In underground water, fluoride comes from infiltration of fertilizers in agricultural areas, sewage treatment system discharge, liquid waste from industries, breakdown of rocks and deposition of volcanic particles. Due to its strong electronegativity, fluoride is attracted by positively charged Calcium in teeth and bones. Low levels of fluoride are required for humans as it has beneficial effects on tooth and bone structures. But excess amount of fluoride causes dental fluorosis, teeth mottling, skeletal fluorosis and deformation of bones. In India, more than 66 million people including 6 million children under 14 years age are affected by this geochemical disease. It is even more serious that the number of people falling prey to fluoride poisoning have been steadily increasing.

Fluorine is highly reactive element of Halogen group. Therefore, it does not exist in free state in the environment. It is highly electronegative element. Fluoride and hydroxide ions have nearly same radius and may replace each other in mineral structures. It is, in fact, one of the most bones seeking toxins of notable chemical qualities and physiological properties as well. The intake of fluoride in human body is through food, water, industrial exposure and drugs (Figure 1a). But drinking water is the major contributor contributing 75% to 90% of daily intake. In underground water, fluoride comes from infiltration of fertilizers in agricultural areas, sewage treatment system discharge, liquid waste from industries, breakdown of rocks and deposition of volcanic particles. Due to its strong electronegativity, fluoride is attracted by positively charged calcium in teeth and bones. Low levels of fluoride are required for humans as it has beneficial effects on tooth and bone structures (Figure 1b). But excess amount of fluoride causes dental fluorosis, teeth mottling, skeletal fluorosis and deformation of bones [2]. That is why, the presence of fluoride in ground water is matter of great concern [3]. Fluoride in drinking water has both positive and negative impacts on health. Small concentration of fluoride is essential for mineralization of bones and the formation of dental enamel [4]. Intake of fluoride concentrations above 1.0 mg/l may cause dental fluorosis [5] and intake above 3.0 mg/l may cause skeletal fluorosis [6]. Normally the degree of fluorosis depends on the account of exposure up to the age of 8 to 10 [7]. Central Ground Water Board, a statutory body of GOI, performs monitoring of groundwater quality of all states of India. The Board reported that there are 19 states in India which have fluoride concentration more than the permissible limit. Haryana is one of them. 14 districts in Haryana namely Faridabad, Gurgaon, Hissar, Jhajjar, Jind, Kaithal, Kurushetra, Mahendragarh, Panipat, Rewari, Rohtak, Sirsa, Sonepat have fluoride concentration more than 1.5 mg/litre permissible limit as prescribed by Bureau of Indian Standards (BIS) in groundwater wells [8]. Many studies were carried in many districts of Haryana to investigate fluoride concentration in groundwater that includes Panipat, Hisar, Jind region, Bhiwani region and Gurgaon region. Singh et al. has found the fluoride content in the range of 0.95 mg/l and 5.20 mg/l. in the groundwater of Pataudi block of Gurgaon district.

The present study is related to various water quality parameters with focus on fluoride in the ground and surface water of Hisar City of Haryana with reference to Indian and WHO standards [9-12].

Haryana is a small state in North India, [12] with total area 44, 212 sq km. It is the 20th state of India and came into existence on 1st November 1966. Haryana is situated in the north between 27 deg 37' to 30 deg 35' latitude and between 74 deg 28' to 77 deg 36' longitude. Its Eastern border is surrounded by UP, Punjab touches to its Western border, Uttranchal, Himachal Pradesh and Shivalik Hills on its Northern border and on its Southern border Delhi and Rajasthan are situated. The capital of Haryana is Chandigarh (Figure 2). Hisar is located at 29°9’11” north latitude and 75°43’6” east longitude and is approximately 165 kilometers northwest of Delhi. The city is rapidly growing urban centers in Northern India. Our study area Hisar City is divided into four different zones for convenience of present study, as given below in Figure 3. 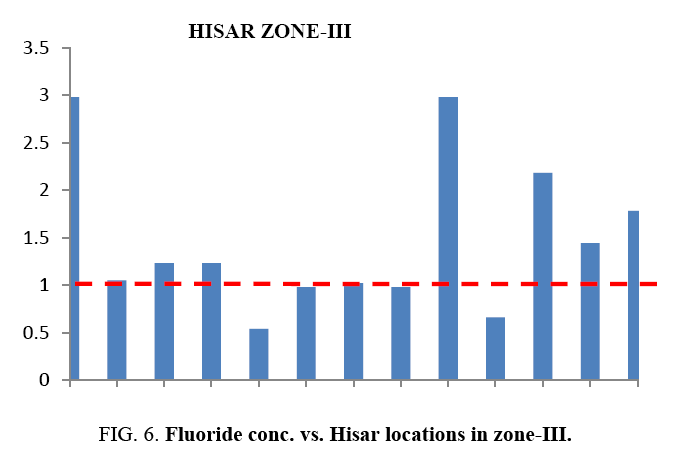 The collected samples were analyzed for following major physical and chemical parameters:

The TDS were calculated using a formula from the USSL, 1954. The fluoride concentration in water was determined spectrophotometrically using Hatch Model DR-2900 spectrophotometer (Figure 7). Standard SPANDS solution used during the experiment to find fluoride content in the samples. Analytical grade chemicals were used throughout the study without further purification. For preparing all the reagents and calibration standards, double glass distilled water was used. Each sample was analyzed thrice and the results were found reproducible with ± 3% error [15]. At most of the locations, the groundwater does not have any colour, odour and turbidity. The taste of the water was slightly brackish. Table 1 and Table 2 provides the minimum and maximum values of various physico-chemical parameters for the selected sites. It was found in the study that the quality of water varies considerably from location to location. Even the pH is found from 6.03 to 7.59. This shows that all samples are existed within the minimum and maximum tolerable limit of WHO and BIS 15. Slightly acidic nature of the water samples has also been noted during the study. Weathering of minerals, rock dissolution and decomposition containing fluoride over a long period of time resulting in the leaching it into ground water are some geological factors for ground water contamination with fluoride. Industrial processes liberating higher concentration of fluoride into atmosphere are also responsible for it. In the studied water samples, the concentration of fluoride is found from 0.5 mg/lt to 2.98 mg/lt. But the BIS recommended fluoride concentration is 1.5 mg/l in drinking water. Taking into account this standard, people in localities like Bus Stand, Green Square Market, Dhani Badwali, Vegetable Market, New Model Town and Camp Chowk should be advised to adopt some defluoridation techniques prior to use of groundwater for drinking purposes.

Canal water is supplied for drinking purposes in most part of the city by Public Health Department. However, in some parts, where there is no water supply or tube well supply, groundwater is used by people for drinking purposes. But the focus of our study was to check fluoride in groundwater of Hisar City. In the present study, excess of fluoride concentrations was found in most of the water samples. Uneven distribution of fluoride in the groundwater of Hisar city is because of uneven distribution of fluoride containing minerals in the rocks. The geological formation of that particular area and rapid ground water depletion is the main reason of the excess fluoride concentration in the study area. Fluoride was not significantly correlated with any of the analyzed water quality parameter. It was also found that in some areas of the study area, water is not suitable for drinking without prior treatment. This problem is severe not only in Haryana state but also at national level and the need of the hour is to take remedial steps not only by the state and national government but also at the social front such as NGO doctors and philanthropists etc. to save our people. With reference to the area under study, defluoridation of the groundwater before use and recharging of the groundwater by rainwater harvesting is highly suggested. These measures need to be practiced improving the groundwater quality in this area. Apart from this, many other defluoridation devices and techniques such as activated alumina, red mud, Nalgonda technique, magnesia and montmorillonite are also useful and refer with certain limitations.