The present research paper describes the green route for synthesis and thermal decomposition studies of newly synthesized Cu (II), Ni (II), Pt (II) and Pd (II) complexes from Schiff base ligand P-Methoxy Isonitroso Acetophenone (p-MINAP). The reaction of ligand PMINAP with metal salts of Cu (II), Ni (II), Pt (II) and Pd (II) results in the formation of respective metal complexes by green synthesis till upto 90%. The compounds were characterized on the basis of elemental analysis, infrared (IR), ultraviolet-visible and 1H-nuclear magnetic resonance spectroscopic techniques. Thermal stability and decomposition behavior of complexes have been studied with the help of thermogravimetric technique at a heating rate 20°C min-1 in a nitrogen atmosphere.

Metals which are essential for animal and plant nutrition are known to form chelates with materials present in the organism. Metal chelates are often intermediate products during catalytic action of enzymes. Therefore, the inorganic chemistry witnessed a great outflow of coordination compounds, with unique structutral characterisitics and diverse application [1-3]. In recent years, metal complexes with Schiff base shows much more potent antibacterial effect against some microorganisms than standard drugs [4-6]. In coordination chemistry, Schiff base play a vital role due to simplicity in their synthesis, different properties and medicinal applications. A number of transition metal complexes with Schiff base acts as an antibacterial and antifungal agents [7-9]. Schiff bases are considered to be very good chelating agents [10], especially when –OH functional group closed with azomethine group. This paper describes the synthesis of Ni (II), Pt (II) and Ir (II) transition metal complexes with the ligand namely p-methoxy isonitroso acetophenone (p-MINAP) have been characterized by various physicochemical technique namely Elemental Analysis, Infrared spectroscopy, 1H NMR spectroscopy and thermo gravimetric technique at a heating rate 20°C min−1 in a nitrogen atmosphere.

1:2 stoichiometric ratios of Copper Nitrate and (p-MINAP) were dissolved in minimum quantity of absolute alcohol and equal volume of distilled water. The copper nitrate solution was added to the reagent solution drop wise with constant stirring.

The pH of the resultant solution was adjusted to 6 –7 with HCl / NH4OH. A pinkish colored complex thus formed was digested on water bath for several hours; it was filtered, washed with distilled water& dried. It was recrystallized from chloroform and finally analyzed for copper, carbon, hydrogen and nitrogen.

0.265 g of Platinum (II) chloride was dissolved in a minimum Volume of alcohol and equal quantity of water was added. Similarly 0.358 g of p-methoxy isonitrosoacetophenone was dissolved in a minimum quantity of alcohol and equal volume of water was added. The solution of Platinum was added to the reagent solution drop wise with continuous stirring in a conical flask. The pH was adjusted to 3.5 to 4.2 using buffer tablets. Then the solution was kept in a boiling water bath for 35 minutes, a colored complex was separate out. It was filtered, washed with water and then alcohol, dried at 100°C for several hours and analyzed for Platinum, carbon, hydrogen and nitrogen.

0.355 g of Palladium chloride was dissolved in a minimum Volume of alcohol and equal quantity of water was added. Similarly 0.716 g of p-methoxy isonitrosoacetophenone was dissolved in a minimum quantity of alcohol and equal volume of water was added. The solution of Palladium (II) was added to the reagent solution drop wise with continuous stirring in a conical flask. The pH was adjusted to 2.5 to 3.2 using buffer tablets. Then the solution was kept in a boiling water bath for 20 minutes, a colored complex was separate out. It was filtered, washed with water and then alcohol, dried at 100°C for 3 hours and analyzed for Palladium, carbon, hydrogen and nitrogen.

Table 1: Elemental analysis data of the Ligand and its metal complexes.

The vO-H of the oxime group observed at 3317 cm-1 in (p-MINAP) is absent in the spectra of the complexes suggesting replacement of the oxime proton by the metal ion during complexation[15]. The peak observed near 1614, 1610 cm-1 in spectrum of Cu (p-MINAP)2, Ni (p-MINAP)2, Pt (p-MINAP)2 and Pd (p-MINAP)2 may be assigned to the perturbed vC=0 and/or vC=N stretching vibration involving bonding through oxygen, and nitrogen donor atoms.

A band appears in the range 1300-1200 cm-1 is reported that N-oxide (N→O) stretching mode in aromatic ring compounds [16]. It is significant to note that for metal complexes reported to have coordination only through the oxime oxygen or nitrogen atoms only.

1H NMR Spectra of P-methoxy isonitroso acetophenone and its metal complexes such as Cu(p-MINAP)2, Ni(p-MINAP)2 , Pt(p- MINAP)2 and Pd(p-MINAP)2 in DMSO solution exhibit peaks due to -CH group, -OCH3 group & Ca and Cb of aromatic ring protons Ha and Hb while does not show any proton signal due to =N-OH group. This suggest that their metal complexes have been formed by the replacement of the proton of the =N-OH group by the metal ion.

It is interesting to note that the peaks due to –CH protons in metal complexes appear at similar value compared to that of
–CH proton in the reagent p-MINAP. Further signals of aromatic ring protons in these complexes occur at higher field side with respect to that of aromatic ring signal in P-methoxy isonitroso acetophenone. The donor atom is closest to the metal ion which involved in the formation of metal ligand bond.

There are various methods of thermal analysis; some of the chief methods that are usually employed are TGA and DTA. This method may be defined as experimental methods for characterizing a system (element or compound) by measuring the changes in physical and or chemical properties taking place in the system as a function of increasing temperature with time. Agrawal et.al. [17] studied the thermal properties of Th(IV)-N-m-tolyl-m-nitrobenzohydroxamate, and suggested that exothermic peak above 200°C presumably may due to burning of organic matter. Bhave and Kharat [18] have studied the thermal properties of metal complexes of some chalk one oximes, isodithiobiurets etc. and found that after loss of hydrated/coordinated water, decomposition of the complex took place in a single step and the order of thermal stability for these complexes is Co(II)> Ni(II)> Cu(II). In general the water of hydration may be considered either as the crystal or as coordination water. The water eliminating below 150°C can be considered as the crystal water and water eliminating above 150°C may be due to its coordination to the metal ion [19-20].

The experimental results of thermo gravimetric analysis are incorporated in Tables 4-7 and figures 1-4. The complexes with p-MINAP have been studied by thermo gravimetric analysis and different thermal analysis techniques. All complexes are found to be stable at room temperature and water of molecules is not associated with them. On heating they start losing their weight with the loss of ligand by fragmentation and finally forming corresponding metal or metal oxides accordingly [21-23]. 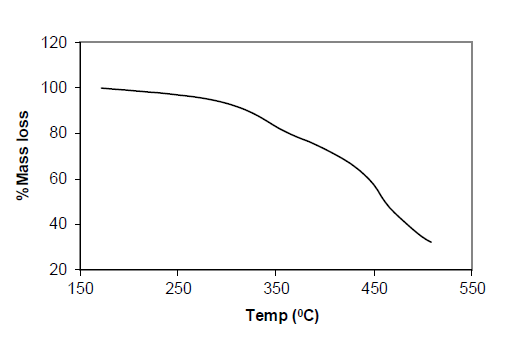 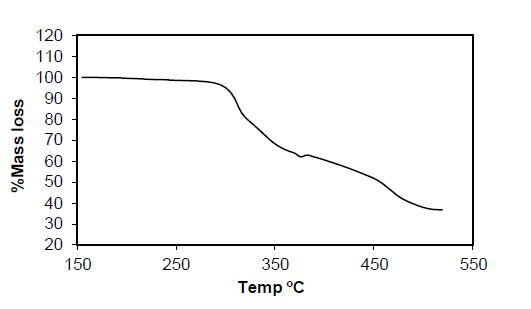 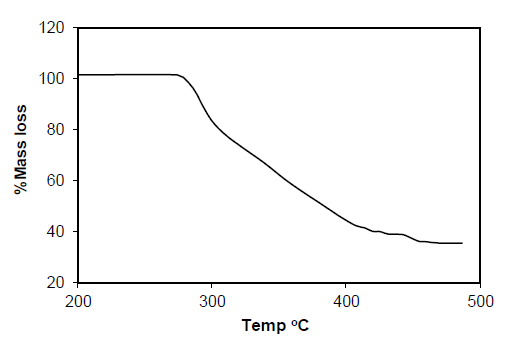 Cu (p-MINAP)2: The TGA curve of compound Cu(p-MINAP)2 shows a significant reduction in weight (60%) due to decomposition of compound at lower temperatures. The resulting decomposed compounds are not stable to heat and losing their weight gradually upto 500°C.

Pt (p-MINAP)2: The TGA spectrum of compound Pt(p-MINAP)2 does not show the sharp reduction in the weight with respect to temperature, continuous gradual reduction of weight is observed upto 520°C and which is decompose completely at 520°C by forming oxides of platinum.

On the basis of analytical, IR, 1H NMR spectral data and magnetic properties, the metal ligand composition was found to be 1: 2. The geometry of complex octahedral geometry has been assigned to Cu (II), Ni (II), Pt (II) and Pd (II) Complex. The thermal data show that complexes were highly stable and its thermal decomposition, as well as thermodynamic parameters, was studied.

The authors would like to thank all the teaching staff of the Department of Chemistry, Institute of Science, Nagpur for all the support rendered during this study.