A Reaction-controlled Phase-transfer System was designed by adding active carbon powder in phosphomolybdic acid (PMA) solution with H2O2 under the mild stirring-reflux conditions. In this Reaction-controlled Phase-transfer System, the intercrossed carbon Nano rings (IC-CNRs) were obtained by Phase transfer when the H2O2 was used up. The catalyst could be easily renewable.

Various forms of carbon nanomaterials such as fullerenes, carbon nanotubes, Nano diamonds and other carbon nanomaterial’s have been rapidly developed not only for their unusual electrical and mechanical properties, but also for their potential use in Nano fluidic device [1-9]. Since 2003 Kawase et al. [10] reported the synthesis of the first Nano rings, a family of similar material has been obtained by that group as molecular recognizers of fullerence [11]. The carbon Nano ring has the Nano ring shaped structure and the excellent properties of carbon materials, as well as more edge carbons and dangling bonds, and thus it has broad application prospects in fields such as Nano devices, energy storage and sensing [12]. Considerable efforts have been devoted to study the preparation and growth mechanism of carbon Nano rings. For example, Li et al. [13] synthesized IC-CNRs with relatively pure hydroxyl surface states. Yang et al. reported a carbon Nano ring with mono layered or multi layered [12]. There are various methods to fabricate these carbon Nano materials with similar structures, a general, simple yet effective method is highly desired but challenging.

Polyoxometalates (POMs) are a subset of metal oxides that represent a diverse range of molecular clusters with an almost unmatched range of physical properties and the ability to form dynamic structures that can range in size from the nano- to the micro meter scale [14]. The diversity of structures as well as the high redox-active molecular components that can make up the structure of POMs allow for a wide range of applications in fields such as catalysis, medicine, biology, and more recently in nanotechnology [15-17]. For example, Kuhn et al. [18] fabricated colloidal carbon particles by dispersing carbon black powder in POMs solution under ultrasonification, and Kang et al. [7] showed that POMs played an important role in the formation of well-defined carbon onions. On the other hand, the reflux technique is widely used in industry and laboratories since it can be left for a long period of time without the need to add more solvent. Based on the above studies, a PMA assisted Reaction-controlled Phase-transfer System was developed for the synthesis of IC-CNRs. The PMA brings the active carbon powder into the solution and acts as a homogeneous catalyst. The IC-CNRs were obtained by Phase-transfer when the H2O2 was used. The catalyst can be easily renewable.

Activated carbon (AC) has high degree of micro porosity with amorphous structure. Some graphite regions can be found in ACs, particularly the ones derived from biomass. [19] Due to the difference between the amorphous and graphite structures, proper oxidizing agents can be used to selectively remove the amorphous part with relatively low stability. In this study, PMA was used to selectively oxide the amorphous carbon. The used acid can be easily adsorbed into the pores of the ACs, where the amorphous pore walls would react with the heteropolyacid leaving the graphited carbon regions. The graphited carbon nanoring has a graphitized structure and less exposed edges, so it can remain intact during the reaction

We proposed the scheme for the formation of IC-CNRs from AC (Figure 1). For one thing, the experimental study shows that unique electronic characteristics of PMA may play a major role in eliminating amorphous carbon and destroying carbon bonds [5,6]. In the preparation process, PMA could be fully dispersed in the activated carbon surface and porous structure. The amorphous carbon was removed and partial carbon bonds were broken with the help of PMA, then the broken carbon bonds were reassembled into IC-CNRs. Besides, the PMB can be converted back to the PMA with the addition of H2O2 solution. For another thing, hydrothermal conditions also have a significant impact on the synthesis of IC-CNRs. It has been reported that SP2-bonded natural crystals (multiwall nanotubes and nano-onions) could grow in hydrothermal conditions [20,21].

Figure 1: Scheme for the formation of IC-CNRs from AC.

In our experiment, PMA (25 g) was dissolved in deionized water (120 ml) in flat bottom flasks (250 ml), and AC (0.5 g) was added to the solution. Then we added two drops of 30% H2O2 solution every four hours with constant stirring-reflux at 100°C for 7 days. Then the system was allowed to cool to room temperature. The dark precipitate was collected and washed with distilled water. A small amount of H2O2 solution was added to the solution and dried it. Then PMA hydrate was obtained. Electron microscopy studies were carried out using a TF30 at an operating voltage of 300 kV. Samples were prepared by ultrasonic dispersion of the amorphous particles in deionized water. After ultrasionication, a drop of the suspension was placed on a micro grid and dried in air.

Figure 2 shows the transmission electron microscope (TEM) pictures of the IC-CNRs. The intercrossing of the particles was supported by several truths. First, their ring-like morphology was clearly demonstrated by the TEM image (Figure 2a). Second, we have failed to separate them into isolated rings through sonication. In addition, it can be identified as the upper part of the ring segment; the corresponding imaging contrast is slightly larger than that of the underlying ring segment, which indicates that the two rings is intercrossing state. Besides, the completely empty inners demonstrate that the formed products are IC-CNRs, but not carbon onions. Through the analysis of the 50 rings of the TEM pictures, the average diameter is 8 nm, and the distribution of the inside diameter is narrow (3-11 nm), as shown in (Figure 3). The high-resolution transmission electron microscopy (HRTEM) image (Figure 2b) shows the inter-crossing state of IC-CNRs much clearer. The interlayer spacing between the sheet is 0.337 nm, which corresponds to the (002) spacing of the graphitic lattice. As shows in Figure 4, the layer numbers of IC-CNRs are very focused on 5–13 with an average layer number of 10. The composition of the products was revealed by an effective characterization method of Fourier Transform Infrared Spectroscopy (FTIR). (Figure 5) shows the FTIR spectrum of IC-CNRs. The two strongest absorption bands at 1100 and 3440 cm-1 are typical C-O stretching vibrations and OH groups. The absorption band at 1760 cm-1 is C=O, while two characteristic bands of CH ware observed at 2915 and 1415 cm-1. Furthermore, the two characteristic peaks at 1195 and 1600 cm-1 are attribute to C-C and C=C. These IR characters demonstrate that we got carbon nanorings. (Figure 6) shows the X-ray diffraction (XRD) patterns of IC-CNRs. The patterns of the samples exhibit two characteristic peaks at 16°and 23°of IC-CNRs. 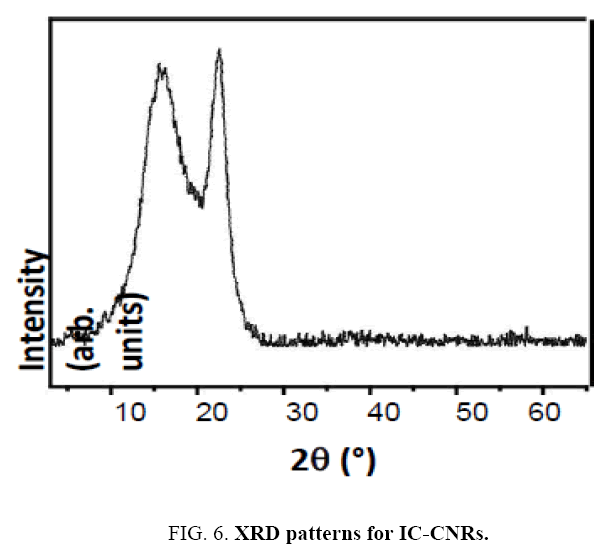 We have demonstrated a simple and renewable way to obtain IC-CNRs. The IC-CNRs can be synthesized by a one-step H3PMo12O40-assisted process in Reaction-controlled Phase-transfer System, which may provide a promising and practical rout for the large-scale fabrication of carbon nanoparticles. Now further work is in progress to evaluate the possibility of synthesizing nanostructures using similar method.