The durability and resistance to degradation of plastics have generated a disposal problem in the environment. In this study, biodegradability of low density polyethylene (LDPE) with Hibiscus mucilage was studied. Samples with different concentrations of Hibiscus mucilage (as 5%, 10%, 15%, 20% and 25%) were prepared. Glycerol as a plasticizer and Fe2SO4 as a pro-oxidant are used. The effect of mucilage concentrations on the mechanical properties (tensile strength and elongation), melt flow rate and density of the blended materials were studied. The biodegradation of the blends in soil was studied as a weight loss after two, four and six months. The results shown that with increase of mucilage content the biodegradability of the blends increased. The biodegradation of the samples in soil burial after six months revealed that the weight of the blends decreased with the increase of mucilage concentrations.

The durability and resistance to all kind of degradation properties made the plastics widely accepted and that have generated a disposal problem in the environment, which is now become the field of interest for polymer researchers. It is common recognition that low density polyethylene is biologically inert, that is these are highly resistant to assimilation by microorganisms such as fungi, bacteria and similar kind of microorganisms [1]. Recycling of plastic is considered as a solution of disposal problem, but recycling is not applicable on all kinds of plastics [2]. Recycling of plastic is also limited to number of times as it loses their properties with number of times of recycling. Advancement in technology for physical, energetic and chemical recycling of plastics waste is developing side by side [3].

Investigating the biodegradable plastics can be considered as one of the most possible way to solve the solid waste problem. Blending of synthetic polymers with natural polymers such as starch, cellulose, lignin, chitin and chitosan is applied as a significant way to enhance polymer degradation in natural environments [4]. The blended polymer is a category of materials in which two or more polymers are mixed together to develop a new material with distinguish physical and chemical properties. The goal of blending two or more polymers is to get the synergetic effect in the blend [5]. Mucilage is physiological products [6]. Mucilage is a polysaccharide mixture [7]. The mucilage was extracted from leaves of Hibiscus rosa-sinensis (China rose) of Malvaceae family were collected from Bandel area of Hooghly district (West Bengal, India). The Hibiscus mucilage contains L-rhamnose, D-galactose, D-galactouronic acid and D-glucuronic acid [8].

In the present study, the blends of low density polyethylene (LDPE) and mucilage of different concentrations were prepared. Mechanical and physical properties of the blends were determined by standard test methods. In addition, the biodegradation in soil were also evaluated. The soil of Amanishah drain of Sitapura area, Jaipur and garden soil was taken to bury the samples. The overall objective of the present study was to evaluate the effect of different concentrations of mucilage on biodegradability of low density polyethylene (LDPE).

Mucilage powder plasticized with equal volume of glycerol, Fe2SO4 (1 wt% of LDPE) mixed in it manually. The samples were processed with different concentrations (5%, 10%, 15%, 20% and 25%) of mucilage in two roll mills at 150°-160°C for 10 min to 12 min. Sample sheets of 0.3 mm thickness were prepared by using compressor molding under heat and pressure. One sample sheet of virgin LDPE was prepared to be used as a reference standard.

The tensile strength and elongation at break were determined by using tensile testing machine (H10K, Tinius Olsen) as per standard test method ASTM D 638. The test was carried out at a speed of 50 mm/min. The mean values of three specimens for each concentration were reported.

Samples cut into strip shape and buried in soil for six months. Samples were weighted before soil burial. At the end of second, fourth and sixth months, samples were removed from soil and weighted.

TABLE 1. Tensile strength and elongation before and after soil burial.

It was found that the decrease in tensile strength and elongation of reference standard sheet (virgin LDPE sheet) were negligible. It’s a strong predictor of degradation in soil.

TABLE 2. Melt flow rate before and after soil burial.

TABLE 3. Density before and after soil burial. 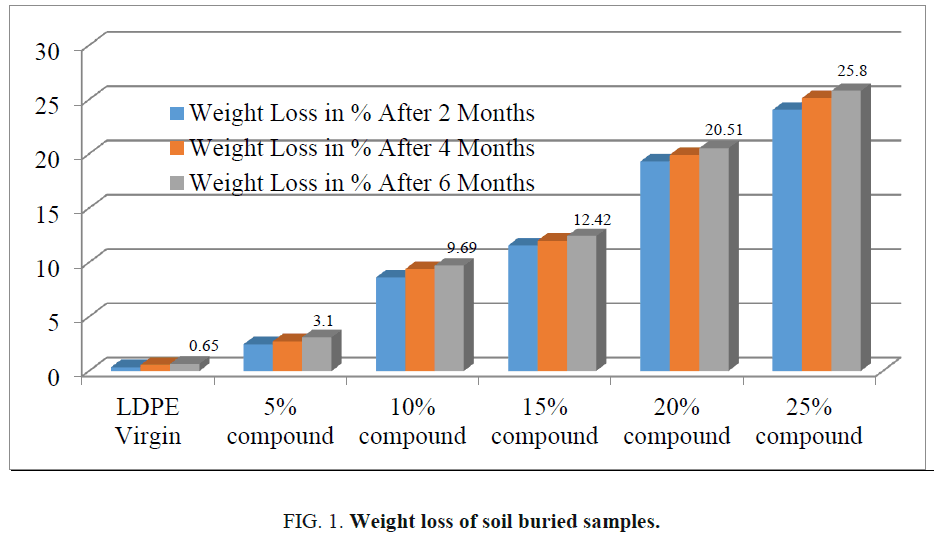 In soil, the blended plastics degraded under the influence of soil microorganisms. Blending of mucilage with synthetic plastics is a possible way to make it biodegradable. The article describes studies on biodegradation of LDPE/mucilage blends. It was illustrated that the blending of mucilage significantly accelerated the biodegradation of material in natural environment. Indeed, the material examined underwent rapid biodegradation, but the course of material used as a green/natural polymer to increase the rate of biodegradation, is totally different from the previously used natural polymers. Here we can say that mucilage is a very good enhancer, initiator and propagator for the biodegradation of plastics. In our opinion, the LDPE and mucilage blends can be used in the production of environmentally degradable plastics.

The authors are thankful to Central Institute of Plastics Engineering and Technology (CIPET), Jaipur to make available their laboratory facilities for this study.