The binary mixture has been developed from the two-pure liquid crystalline bismaleimides (BMIs) containing polymethylene flexible and aramide-arylate mesogen groups, using the Shroder-Van Laar equation. Differential scanning calorimetry (DSC) analyses show the relationship between melting and volubility of each constituent of the binary system via the different liquid and solid phases. The concept of a eutectic mixture having special thermal properties has thus been demonstrated. The eutectic melting temperatures are much lower than either of the pure constituents, making it easier to use these monomers in molten state. In addition, the eutectic mixture improves the crosslinking conditions by increase fluidity of the binary mixtures and maintains its fluidity before hardening. In these systems, the two monomers can combine to form the liquid crystal state after a crosslinking reaction, as shown on polarized light microscopy.

The bismaleimides (BMIs) enable the production of thermostable adhesives and high-performance composite materials to replace the polyepoxides and metals in aeronautic, space, electronic, and military equipments [1,2]. However, the major problems of those materials are high melting point, high rate of crosslinking whose attendant high cost restricts their use to certain hi-tech fields. Considerable efforts are thus being devoted to improving the ease of use of bismaleimides. These high melting points have oriented research to the study of mixtures of maleimide systems with lower melting temperature for better molten state process management. The use of binary mixtures has been investigated in this work.

There are several published examples of mixtures with reduced melting temperature [3-7]. Most often, they are binary mixtures of two bismaleimide monomers. Varma and Tiwari [3] have clearly shown the effect concentration of the mixtures that is responsible for lowering melting and polymerization temperatures in comparison to the individual thermal characteristics of each pure monomer. Nagai et al. [4] published the thermal study of mixture of N,N-diphenylmethane-4,4’-bismaleimide (BM) and another BMI monomer.

The mixture melted at lower temperature when the proportion of the monomer with lower melting temperature was increased. The lowest melting temperature corresponded to a particular mixture, a eutectic mixture, which could be determined by both thermal measurement and theoretical calculations. Loustalot et al. [5] reported that the eutectic composition had a single melting point and thus a single and perfectly homogeneous liquid phase. In the eutectic phase, two BMIs could combine to form a three-dimensional network by copolymerization [6].

The concept of bismaleimides liquid crystals (BMI-LC) was first developed in 1990, and then many BMI-LC have been synthesized [7-13]. In this area, the epoxides and bisacrylates liquid crystals thermosetting were described in the literature [14,15]. They show the high potential for development of liquid crystal materials. These research papers have already led to a large number of structures properties correlations. It was shown that the state of smectic liquid crystal (more ordered than the nematic one) could be encouraged by the presence of a central polymethylene group and a junction of esters. Materials obtained by liquid crystal thermosets have higher thermal and electrical properties than those made from"conventional" resins which crosslinks in the amorphous state [14,16-18]. They also present high glass transition temperatures, high elastic moduli, small thermal expansion coefficients, low dielectric loss and hardnesses. The presence of a liquid crystal state can increase the degradation temperature of the material. It also reduces the absorption of water or other solvents. These liquid crystal materials also present high fracture energies. This work helped clarifying a few interesting properties e.g. melting and the nature of the liquid crystal state obtained after crosslinking.

Our work focuses on the study of the binary mixtures made from original BMIs having a mesogen aramide/arylate functional group and polymethylene flexible group of variable lengths (Figure 1). The synthesis, purification, solubility, thermal properties (effects of parity on the melting points and thermal reactivity) and the characterization of the liquid crystal state of these BMIs has been described [19,20]. Composition and eutectic melting temperature were estimated using equation of Schroder-Van Laar [7]. Then, the mixtures were studied by DSC and by polarized light microscopy (PLM) to confirm the nature of the states of matter observed in different thermal treatments: crystalline, amorphous or liquid crystal.

Bismaleimides B8 and B10 were synthesized using industrial reactor driver synthesis protocols already developed [19,20] and purified before mixing. The purity of B8 and B10, determined by HPLC, are 95% and 96%, respectively. Dimethylformamide (DMF) was supplied by Sigma Aldrich and used without further purification.

Mixtures containing varying proportions of two monomers (B8 and B10) were prepared in DMF at room temperature and under magnetic stirring. All the resulting solutions were perfectly homogeneous. After evaporating the solvent and drying for 12 hours under vacuum at 60°C, the resulting powders were finely ground to obtain the finest mixtures possible. The drying step is very important in order to eliminate solute-solvent complexes that may sometimes appear as artifacts in thermal analyses.

The DSC thermograms were recorded with TA Instrument DSC Q10 and DSC Q100. The analyses were performed with 2 mg and 5 mg of product. The heating rate varied between 10°C/min and 20°C/min. The range of temperature varied between 40°C and 350°C. Textures and thermal transitions were observed with a hot-stage polarized light microscopy (microscope OLYMPUS equipped with METTLER FP82 and central processor METTLER FP90 (PLM)). The objective allowed magnification of 100 or 200. Photomicrographs were obtained at each phase transition and crosslinking process.

The chemical structure of the monomers contains the mesogen aramide/arylate functional groups and polymethylene flexible groups of variable lengths: B8 and B10 (number of polymethylene groups, n, is even). They have close melting temperatures and crosslinking temperatures. These BMIs show effects of parity in thermal properties as described. Indeed, BMIs whose n is even (even BMI) has higher melting point than odd BMIs (n is odd), its crosslinking temperatures is lower and it give rise to an ordered state upon melting. Even BMI crosslinks quickly during fusion (Figure 2). But if the heating rate is faster (20°C/min), it can melt and transform into amorphous state before crosslinking. These effects of parity can be explained schematically by the more linear conformations of even BMI. The ordered state was defined as smectic liquid crystal state (type C) by PLM and X-Ray diffraction [12]. 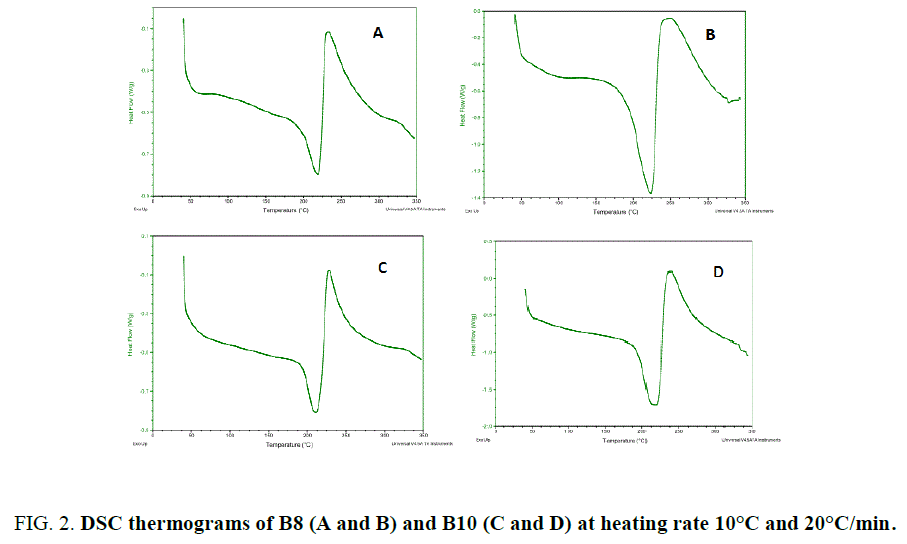 The estimation of BMI eutectic composition and its melting temperatures were performed using Schroder-Van Laar equation:

Where R is the gas constant, ? is the mole fraction of monomer in the mixture, ΔHm is the heat of fusion of the monomer, TB is the melting point of the pure BMI, determined by DSC (Table 1), and T is the melting point of the mixture. Because at 20°C/min, BMIs can transform into amorphous state before crosslinking, the values of melting and crosslinking temperatures at 20°C/min are taken for calculation. The calculation from DSC curves of the pure BMIs is provided in Figure 3, which give the melting temperature and the composition of the calculated eutectic mixture. The results of the experimental results for BE 810 by DSC are grouped in Figure 4 (the thermograms allure) and Table 2 (numerical values of the temperatures of fusion and crosslinking). The calculations show that the eutectic mixture will be 0.5/0.5 mixture. 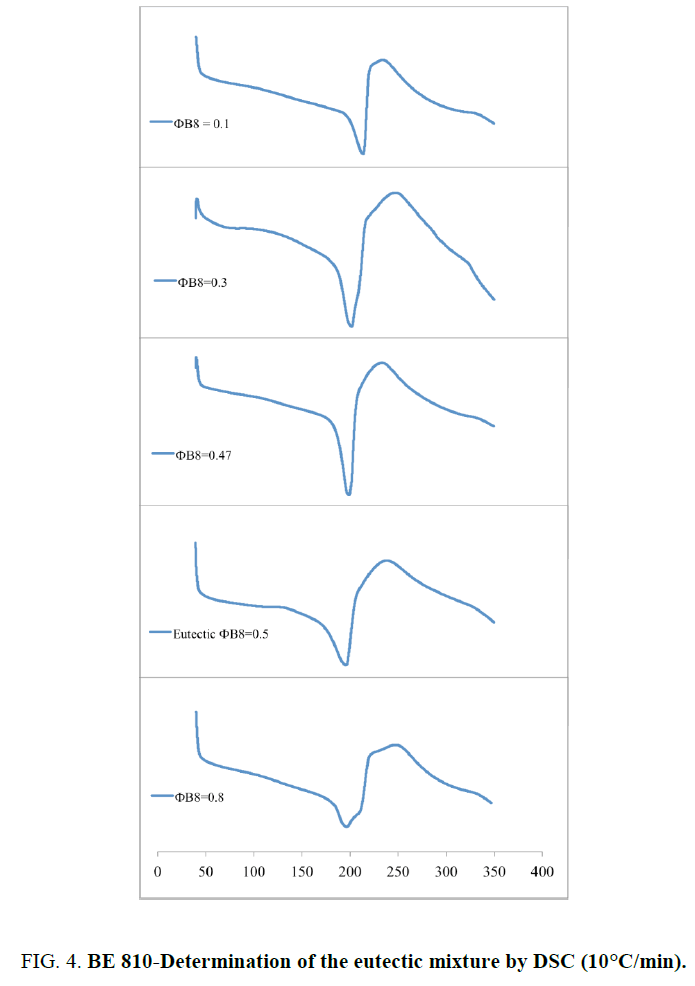 Table 1. Temperature and enthalpy of melting and crosslinking of BMIs.

This mixture consists of two even bismaleimides with high melting temperatures 20: 223.8°C for B8 and 220.0°C for B10. For low molar fraction of B8 (?B8=0.10) the thermogram shows a single endotherm at 212.6°C, while two endotherms are visible for ?B8=0.30 (Figure 3 and Table 2). For ?B8=0.30 the endotherm peak at 199.8°C corresponds to the melting point of the eutectic mixture, the other peak at 206.9°C (in the form of a shoulder) corresponds to the melting of the B10 in the mixture. For ?B8=0.47, only one endotherm is presented at 197.9°C. The fraction of ?B8=0.50 confirm this result because only one endotherm, like precedent fraction, appeared at 194.3°C (pic). This thermogram has the lowest endotherm and its mixture is considered as eutectic. The eutectic area determined experimentally is very close to the calculated value of the eutectic (0.50/0.50). Out of eutectic zone, with a large proportion of B8 (?B8=0.80), two endotherm (a peak and a shoulder) are visible in the thermogram. The lower endotherm at 196.2°C correspond to the eutectic and the second, the melting of B8 at 210.1°C.

These results are correct for thermosetting molecules. These interesting results can have several explanations. First, they can be explained by the similarity of the molecular structures of the components in the mixtures. These similarities leads to an advanced miscibility of the components in the mixtures (close solubility parameters) [19,20]. A high purity of BMI-LC can also explain these results [7]; impurities significantly alter temperatures and enthalpies of fusion. The more significant deviations of the order of 17°C obtained by Hoyt and Huang [7] from their eutectic mixtures of rigid liquid crystals BMIs were mainly due, according to the authors, to insufficient levels of purity. In this case, the impurities play the role of plasticizers. These results also showed that exothermal peaks do not regularly decreased until the eutectic (Table 2) as compared with other studies where a regular decrease in the exothermic peak was observed [5]. In those studies, a minimum value of the eutectic point was obtained by varying the binary compositions. Moreover, the value of the exothermic peak increased again. Loustalot et al. [5] correlated this greater thermal reactivity of the eutectic mixture to the phenomenon of copolymerization.

The results obtained by DSC and PLM are correlative. The mixture BE 810, consisting of two even BMI with the mole fraction 0.5/0.5, melted at lower temperature, between 193°C and 200°C, lower than pure BMI. The endotherm at 194.3°C (peak) correspond to the melting of the mixture. Since these BMIs are particularly thermal reactives, the melting phenomenon can be slightly modified when the heating rate change. At 10°C/min, after melting, the crystalline state transforms into a new state that reflects polarized light. This ordered state could be the liquid crystal state [11,20] (colorations and textures are identical to the previous observed at B8 and B10). The mixture melts and but has low fluidity. At higher heating rate (20°C/min), the ordered state become totally amorphous (from 195.8°C to 205.0°C) and the mixture become more fluidity. It can form a colored film. Then the crosslinking occurs fast when the heating continues and leads to the ordered state from amorphous state. This liquid crystal state is characterized by its strong reflection of polarized light and its yellow-orange color. This texture is identical with the texture obtained under the same thermal condition with pure B8 and B10 whose liquid crystal structures have been confirmed. The mixture of these BMIs does not preclude after crosslinking an ordered state (Figure 5). Eutectic mixtures of bismaleimides having a mesogen aramide/arylate functional group and polymethylene flexible group (n=8 and 10) showed interesting physical and chemical properties. The melting temperatures of these mixtures are significantly lower (23°C) than the pure BMIs melting temperatures. In addition, these eutectic mixtures crosslink such as pure BMIs but unlike pure B8 and B10, the crosslinking occurs after the complete melting. This phenomenon enlarges the processing windows, makes the use of BMI much easier. They show an ordered type liquid crystal state after the crosslinking.

This work received the support of the Vietnam National Unviersity-Hanoi in the project number QG-14-17.