Cu3SbSe4 is a promising thermoelectric material due to high thermo power. Although it has a simple crystal structure derived from zinc blende structure. The thermoelectric properties of bulk of this semiconductor compounds, prepared by rapid hot press (RHP) technique at 270ËC while Cu3SbSe4 thin films were deposited onto glass substrate (microscopic slices) by chemical bath deposition (C.B.D) at (150ËC). Structure characterization was carried out using X-Ray Diffraction spectrum, in order to determine the average crystallite size which found in the range (20-30 nm). The obtained Cu3SbSe4 had p-type semiconductor has low resistivity in the range (0.124 Ωm). AFM micrographs of surface of the prepared film are observed that distance in the range (16-65) nm. The carrier density and Hall mobility in Cu3SbSe4 bulk were in the range 0.591×1018 Cm-3 and 117.3 Cm2/Vs. The band gaps of the Cu3SbSe4 film are determined from UV-Vis spectrophotometer are found to be within the range (1.25-1.5) eV while the energy band gap of Cu3SbSe4 bulk which determined from FT-IR spectrophotometer is (0.362eV) and it corresponds to wavelength (3417 nm). The power factor (PF) of Cu3SbSe4 samples is remarkably improved due to the optimization of whole concentration. Lattice thermal conductivity kL is very low which can be attributed to

Synthesis of stoichiometric ternary metal chalcogenides by a simple approach is an attractive and challenging task due to their unique physical and chemical properties [1]. Since the last four decades, scientists have been attempting to find out alternative renewable energy sources to traditional energy sources. In recent years more efforts have been made to utilize the waste environmental energy by introducing alternative energy conversion routes such as solar cells [2], fuel cells [3], water splitting for hydrogen production [4], nanogenerators [5], as well as thermoelectricity. In the past few years copper containing chalcogenides have become promising materials due to their potential applications in photovoltaic, photocatalytic and thermoelectric devices. Now-a-days semiconducting materials of I–V–VI group chalcogenides gained increasing attention as they showed good electronic transport properties like low thermal conductivity, near-optimum band gap energy and a large absorption coefficient (>104 cm-1)[6]. Among the group I–V–VI elements Cu–Sb–Se forming highly conducting solid solutions with varying compositions such as Cu3SbSe3 and Cu3SbSe4 has been reported. With respect to its availability and low cost it was suggested as an alternative to CIGS [6].

Cu–Sb–Se has been studied as a promising material for photovoltaics as well as thermoelectric purposes. The thermoelectric materials are used to convert heat energy to electrical energy and their efficiency depends on the dimensionless figure of merit (ZT). The efficiency of a TE material is generally characterized by the dimensionless figure of merit ZT, defined as:

The cleaning of the substrate surface is significant for the characteristic of the film structure Cu3SbSe4 thin films were deposited on glass substrates by CBD method. Glass substrates were cleaned using an oxidant mixture (K2Cr2O7:H2SO4 - 1:10, HNO3, 1% EDTA) then rinsed with distilled water before deposition [8].

For preparation of Cu3SbSe4 2 mmol (SbCl3), 8 mmol Se and 40 mL (EDA) were put into a 100 mL glass beaker. After mixing uniformly, 60 mmol CuCl was then put into the same beaker. The solution was stirred by a magnetic stirrer at the speed of 1700 r s−1 maintaining a temperature of 150°C during the synthesis. Two glass substrates were introduced vertically in the chemical bath with the help of a suitably designed substrate holder. After films deposition, substrates were taken out and dried at 373 K for 30 minutes and kept at room temperature for further measurement after about two hours, a large quantity of powders was precipitated. Then the precipitates were collected, filtered and washed with anhydrous ethanol and distilled water until a pH value close to 7 was obtained, and then dried under vacuum at 60°C for nearly 6 h . The formed powder was grinded by a ceramic mortar, pressed under 10 ton/cm2 as disks of (3.11) mm diameter and 3.5 mm thickness. Then Cu3SbSe4 material pressed at (280°C) for (30 min) with rapid hot press system (RHP) are shown to agree with material consolidated under typical consolidation parameters. A rapid hot press system in which the heat is supplied by RF induction to rapidly consolidate thermoelectric materials is described. Use of RF induction heating enables rapid heating and consolidation of powdered materials over a wide temperature range (100-3700) °C. Such rapid consolidation in nanomaterial is typically performed by spark plasma sintering (SPS) which can be much more expensive. We have designed and fabricated a rapid hot pressing technique based on induction heating that is as fast, if not faster, than SPS for the rapid consolidation of materials without the effects of a dc current. Such a system will be ideal for maintaining small and nanometer scale microstructures. The technique is demonstrated by consolidating dense Cu3SbSe4 based thermoelectric materials at 553 K for 30 min. Fabrication and maintenance of this system will cost significantly less than commercial resistance heated or spark plasma sintering presses. The RHP system is an economic and robust system for research, development, and production of materials for a variety of purposes. Structural characteristics and morphology of the bulk materials were determined by X-ray diffraction (XRD) method using Philips X-pert Pro diffractometer at room temperature with CuKα radiation (λ=1.54 Å).

The XRD patterns of the samples of Cu3SbSe4 at room temperature are shown in FIG. 1. The powder XRD pattern seen in FIG. 1(a), that we do not observe any beak before (RHP). While after (RHP) in FIG. (1b). The main diffraction peaks correspond well to the standard JCPDS card (no. 01-085-0003) of Cu3SbSe4 with tetragonal structure. The lattice constant calculated was found to be (a = 5.655Å) for (112) plane. In FIG. (1c) we observe increase beak intensity with increasing RHP temperature. The crystallite sizes of Cu3SbSe4 are estimated by using Scherrer's formula [9,10]:

Where, K = 0.94 and λ is the wavelength of X-ray used which is Cu Kα radiation (λ = 1.54Å) and β2θ is the full width at half maximum (FWHM) of the diffraction peak corresponding to a particular crystal plane. The value of the crystallite sizes D (TABLE 1) varies within the range 20 to30 nm. The strain (ε) was calculated by the Formula 11:

The dislocation density (δ), defined as the length of dislocation lines per unit volume of the crystal, was evaluated from the formula [11]:

The result reveals that lattice parameters (a, d) decrease monotonically with increasing (RHP) temperature, as shown in TABLE 1.

FIG 2. AFM image of surface deposited film of Cu3SbSe4. We note that the structure in the form of granules with different sizes and measurements, where Horizontal distance in the range (16-65) nm.

FIG. 2. Shows AFM image of surface of the film of Cu3SbSe4.

It can be observed that the surface of the film is not very compact. Small crystallites or grains compose them. Round shaped clusters packed together constitute the film. We note many empty spaces can be seen between these clusters. The size of these small crystallites cannot be determined from these pictures. The average grain size is about 52 nm.

FT- IR spectral: FT-IR transition Intensity carried out in the range of wavelengths (2500- 25000 nm). FIG. 3 Shows the FT-IR transmission in function of wavelength, it indicate the energy band gab is (0.362eV) which corresponds to wavelength (3417 nm). FT-IR revealed the existence of some toxicity in the prepared samples before (RHP) but this toxicity reduces acutely after (RHP).

UV-Visible spectrum: The optical absorption of Cu3SbSe4 thin film was studied in the wave-length range 295 to 1100 nm. As shown in FIG. 4. Cu3SbSe4 film shows higher absorption at shorter wavelength side. 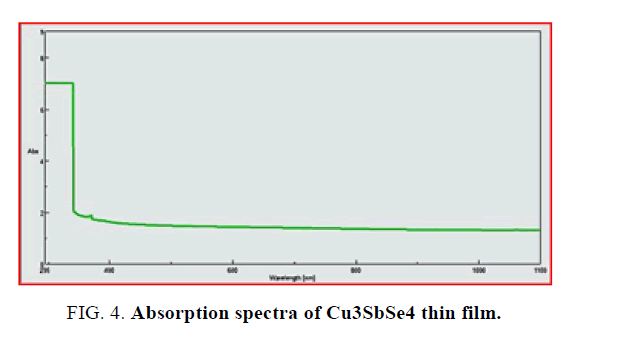 Energy band gab can be calculated using this formula 12. 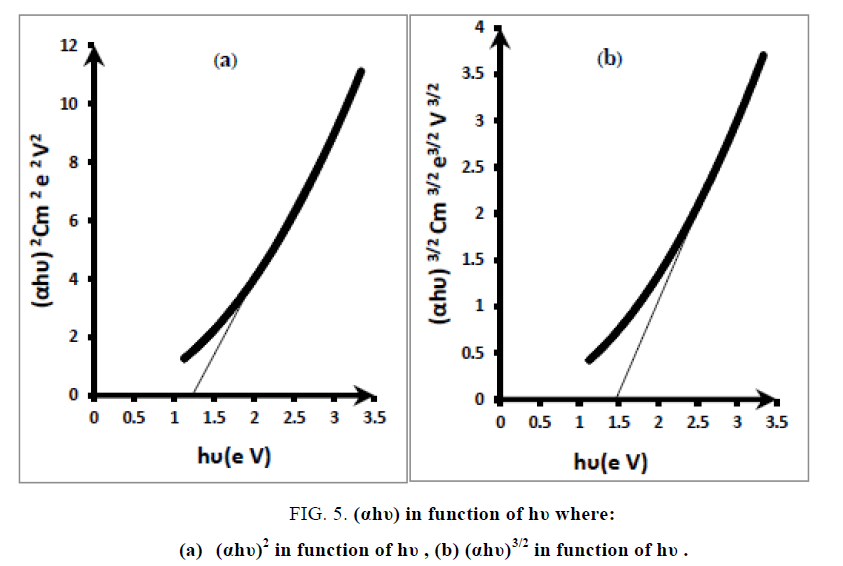 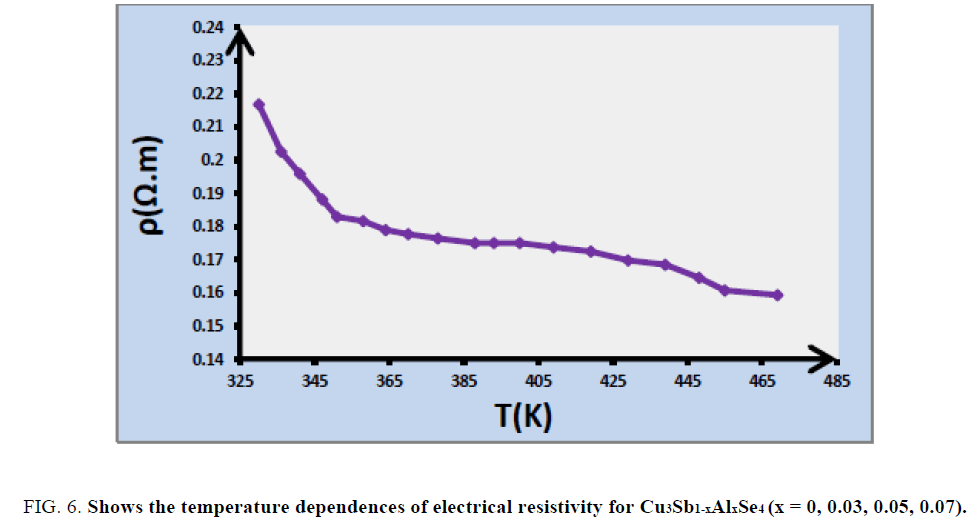 Where, C is consistent and kB Boltzmann constant (8.62 × 10−5 eV/K), E.g. band gap. By best fitting of experimental data in the above formula, TABLE 2 shows the variation of activation energy with (RHP), we note that the conductivity of the samples increases with (RHP).

Hall effect measurement: The variation of Hall voltage (VH) with the current for Cu3SbSe4 at room temperature shown in FIG. 7. The lattice structure may be unstochiometric, and the interstitials control the conductivity type [12,13]. So that the prepared Cu3SbSe4 are p-type (Because of the Hall coefficient resulted is a positive signal). 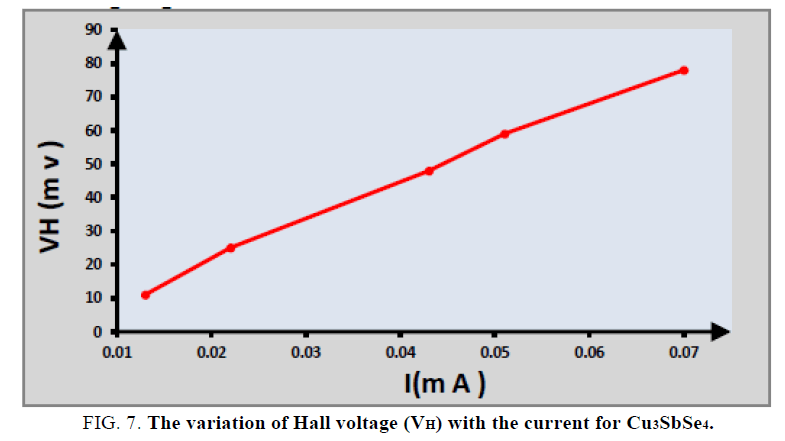 FIG. 7. The variation of Hall voltage (VH) with the current for Cu3SbSe4.

Due to the vacancies of sulfide ion [14,15] that means the conduction is dominated by holes [16].

According to the relationships [14]:

Where, a, b and d are the dimensions of the Cu3SbSe4 sample and RH is the hall coefficient. 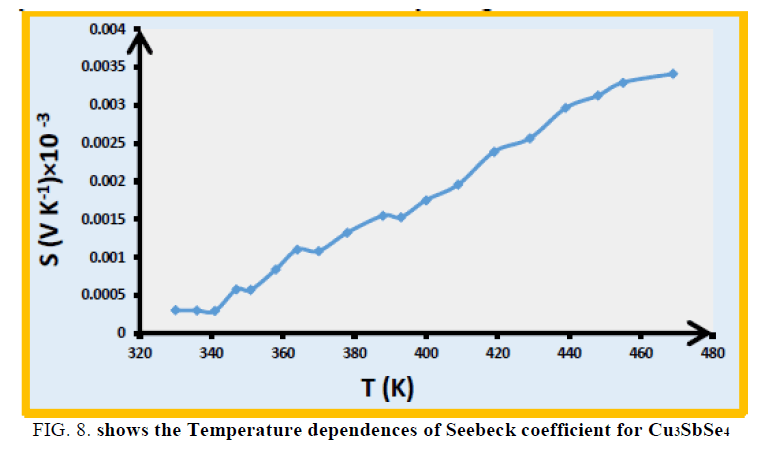 FIG. 8. shows the Temperature dependences of Seebeck coefficient for Cu3SbSe4 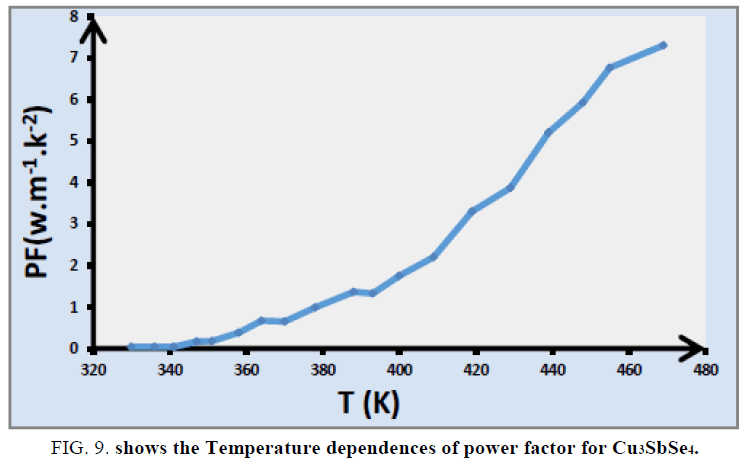 FIG. 9. shows the Temperature dependences of power factor for Cu3SbSe4. 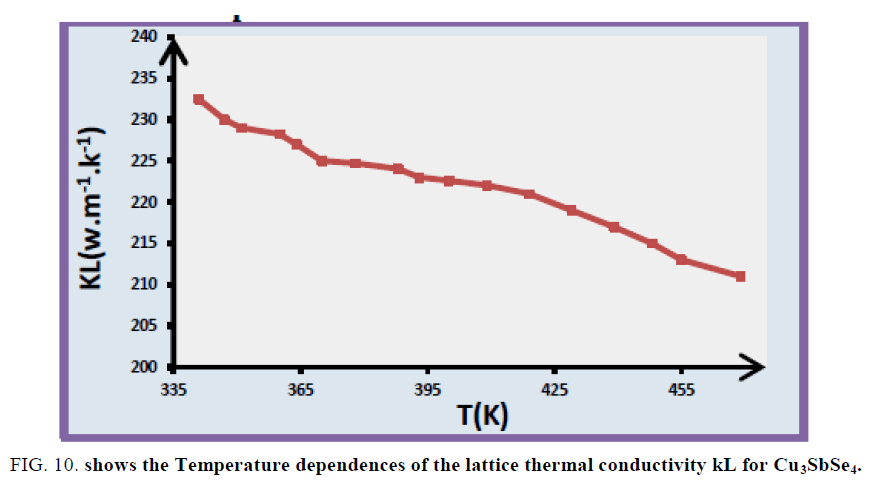 FIG. 10. shows the Temperature dependences of the lattice thermal conductivity kL for Cu3SbSe4. 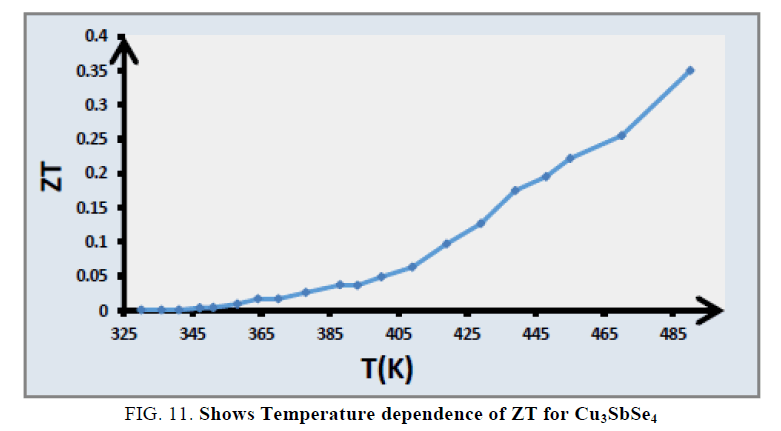 In summary, P-type Cu3SbSe4 crystals were fabricated through Rapid hot press system (R.H.P) technique. The electrical, structural and optical properties of Cu3SbSe4 properties were investigated. AFM micro-graphs of surface of the prepared film are observed that distance in the range (16-65) nm. Structure measurement determine the average crystallite size which found in the range (20-30 nm). The results showed that decrease in thermal conductivity, which can be attributed to the strong phonons scattering by atom mass fluctuations. The large drop of the resistivity is caused by increase in whole concentration. A large thermoelectric figure of merit ZT = 0.35 is obtained for Cu3SbSe4 at 490K. 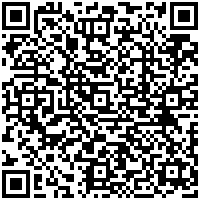