Liquid crystals (LCs) are self-assembled functional soft materials which possess both order and mobility at molecular, supra-molecular and macroscopic levels [1-3]. LCs received much attention in the recent years because of their ability to transfer their long range orientational order on the dispersed materials such as nanoparticles and different colloids [4-10]. Introduction of nanoparticles do not induce significant distortion of LC phases. Nanoscience and nanotechnology are vital frontiers in scientific research. A broad area of research topics from fundamental, physical, biological and chemical phenomena to material science has been addressing by the scientific society at the nanoscale [11-13]. Nanoparticle doping technology provides a more convenient and flexible approach for the modification of liquid crystal materials and for designing new and improved devices based upon LCs. Moreover, different nanoparticle dispersion in liquid crystals has enhanced the physical properties of LCs. LCs act as tunable solvents for the dispersion of nanomaterials and LCs being anisotropic media, they provide a very good support for the self-assembly of nanomaterials in to large organized structures in multiple dimensions. Hence LC mediated self-assembly can be efficiently used to organize different kinds of nanomaterials in to soft and well defined functional super structures. Zinc oxide (ZnO) nanoparticles have become famous among researcher’s due to its use in various applications like gas sensors [14], chemical sensors [15,16], biosensors [17], superconductors [18], photo catalyst [19], optoelectronic devices [20-22], cosmetics etc. Rao et al. have published their results on different oxide materials, luminescent materials, polymers in their earlier studies [23-29]. ZnO is a wide band gap semiconductor having high optical transparency and luminescence in visible and near ultraviolet range of spectrum. Therefore, it is usually used in light emitting diodes and solar cells. Moreover, zinc oxide is environmental friendly and ease to synthesize.

Take a known amount (3 g) of ZnO dissolved in 10 ml of conc. HNO3 solution and 10 ml H2O in 100 ml RB flask. The solution is stirred at ambient temperature for 1 h. Then add Urea (reducing agent/fuel) which decomposes macro-molecules into nanoparticles. Now add 10 mol% flux (Boric Acid) and stirred the solution for 0.5 h. Later keep the entire solutions into high pressure reactor at 120°C-130°C maintaining a pressure of 200 Kg/cm2 for 30 min. At this stage urea decomposes the entire solution in to ZnO nanoparticles. Then wash the resultant powder with methanol/water 5 to 10 times and dried and finally ZnO nanoparticles of size nearly 70 nm are obtained. These nanoparticles are further characterized by UV-Visible Spectroscopy and SEM experimental techniques.

Dispersion of nanoparticles into the LC compounds

For uniform dispersion of nanoparticles in LCs, the nanoparticles are first dissolved in ethyl alcohol, stirred well about 45 minutes and later introduced in the isotropic state of mesogenic material (8OBA and 12OBA) in quantity 0.5 wt% separately. After cooling, the nanocomposite 8OBA and 12OBA is subjected to study of the textural and phase transition temperatures using a polarizing optical microscope (SDTECHS make) with a hot stage in which the substance was filled in planar arrangement in 4 μm cells and these could be placed along with the thermometer described by Gray [29]. Textural and phase transition temperatures are studied after preparation of the sample and observations are made again to understand the stability of nanoparticles. The presence of citrate capped Au nanoparticles in 8OBA and 12OBA is studied by UV and SEM data and existence as well as size is determined by XRD technique.

When equipment similar to the equipment that generated a degraded image is available, it is generally possible to determine the nature of the degradation by experimenting with various equipment settings. However, relevant imaging equipment availability is the exception, rather than the rule, in the solution of image restoration problems, and a typical approach is to experiment by generating PSFs and testing the results with various restoration algorithms. Finally, when no information is available about the PSF, we can resort to “blind de-convolution” for inferring the PSF. One of the principle degradations encountered in image restoration problems is image blur. Blur that occurs with the scene and sensor at rest with respect to each other can be modeled by frequency domain low pass filters. Another important degradation model is image blur caused by uniform linear motion between the sensor and scene during image acquisition. Periodic noise produces impulse-like bursts that often are visible in the Fourier spectrum. The principal approach for filtering these components is to use notch reject filtering. The general expression for a notch reject filter having Q notch pairs is

Where Hk (u, v) and H-k (u, v) are high pass filters with centers at (uk, vk) and (-uk,-vk), respectively. These translated centers are specified with respect to the center of the frequency rectangle, (M/2, N/2). Therefore, the distance computations for the filters are given by the expression

A special case of notch rejects filtering that notch out components along of the frequency axes also are used for image restoration.

Determination and characterization of these mesophases will provide very important information on the pattern and textures of the liquid crystals. The transition temperatures and textures observed by polarizing microscope in 8OBA pure is shown in Figure 1(a-d) while that of with dispersed ZnO nanoparticles with concentration 0.5 wt% shown in Figure 2(a-d) respectively. The thermal range of nematic phase is changed slightly due to the dispersion of nanoparticles and the textures of the phase’s changes by the self-assembly of nanoparticles. The DSC thermograms are shown in Figure 3 to Figure 6. The transition temperatures at the phase transformations determined through POM is shown in the Table 1. The compound 8OBA and 12OBA are brought from sigma-Aldrich, USA and used as such. For uniform dispersion of ZnO nanoparticles in 8OBA and 12OBA, the nanoparticles are first dissolved in ethyl alcohol, stirred well about 45 min and later introduced in the isotropic state of mesogenic material in the ratio of 0.5 wt% concentration separately. 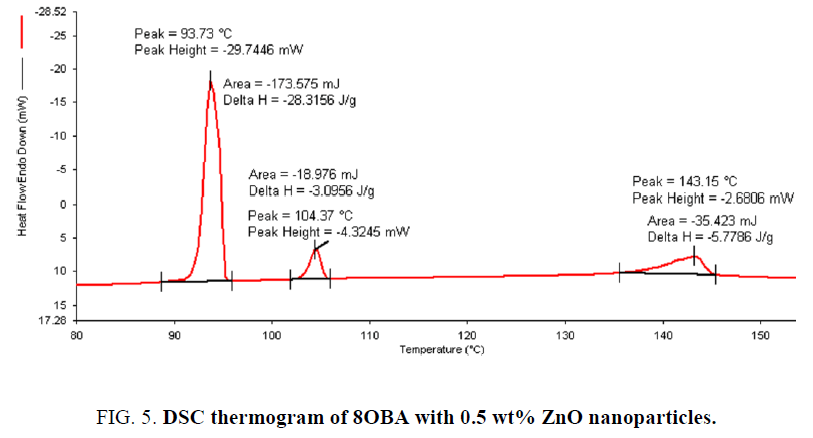 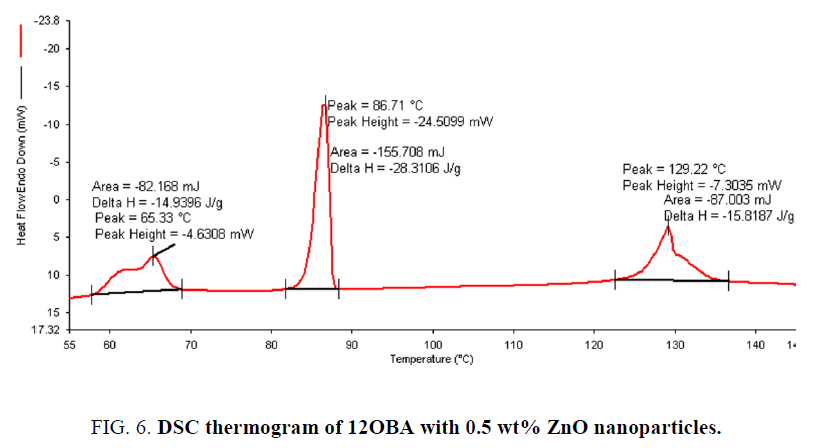 As synthesized ZnO nanoparticles dispersed in 12OBA Compound is analyzed by using FTIR at room temperature. The compound is stable at room temperature, the IR frequencies in solid state which are correlated in bond with the pure bond 12OBA. The assigned bonds corresponding to the resultant frequencies from the spectra are tabulated. Due to the excitation of both molecular vibrations and rotations absorptions of electromagnetic radiation causes the formation of absorption bands in the IR spectra which are useful to explain the bonding interaction of the molecules. In both spectra exhibit a strong electromagnetic absorption at 1609.97 cm-1, 1599.63 cm-1 and 1256.26 cm-1, 1256.26 cm-1 corresponding to aromatic ring stretching. The absorption bands at 2915.53 cm-1 and 2918.77 cm-1 are corresponding to OH bond. The existence of OH bond vibration at 647.77 cm-1, 654.24 cm-1 and also represents the benzoic acids moiety due to their strong intensity and strongly supports the existence of 12OBA. The bond 843.70 cm-1, 843.70 cm-1 are assigned to stretching ring vibration at the out of plane. While dispersing the ZnO nanoparticles the intensity of the peaks are found to be decreased as shown in the Figure 7 and Table 2. The intensity of 12OBAwith dispersed nanoparticles is found be decreases, this related to the change in dipole that occurs during the vibration. The vibrations that produce small change in dipole result in a less intense absorption than those that result in a relatively modest change in dipole. As we have taken the FTIR data in mid infra-red region, it is not possible to take the nanoparticle data. 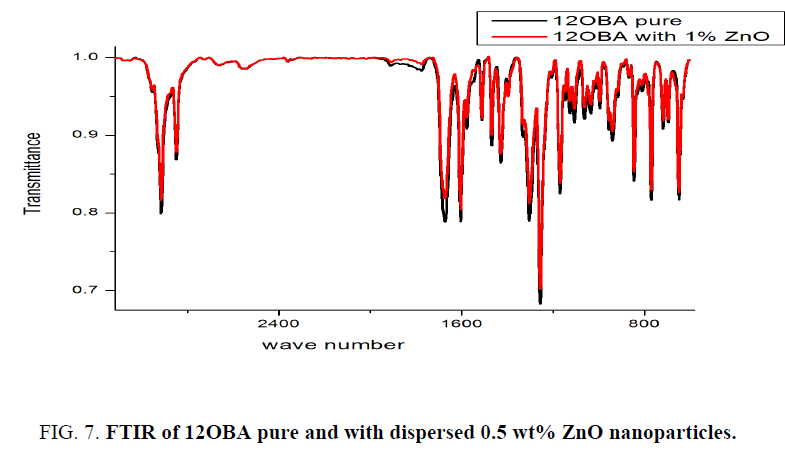 Table 2: Functional group intensities for 12OBA pure and with dispersed ZnO nanoparticles across the following wavelengths. 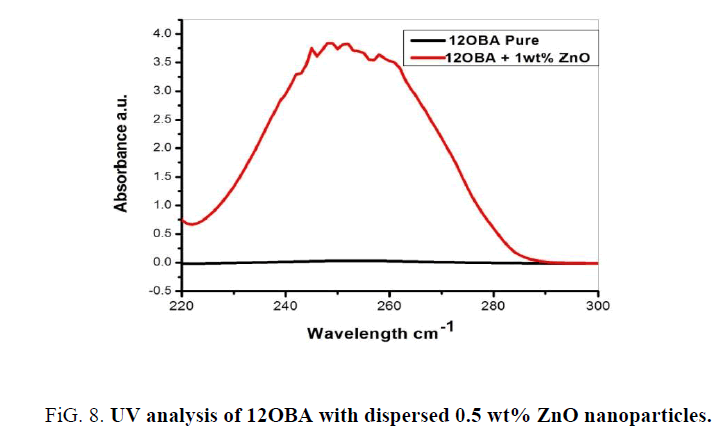 SEM gives the magnified image of the surface of a material, topographical information and also gives the information regarding the composition of the elements in the material. The SEM images of ZnO nanoparticles and with the dispersion of 1 wt% ZnO nanoparticle in 12OBA is shown in the Figure 9 to Figure 12. The nanodispersed liquid crystal compound images collected from POM and observed that the images quality is very poor with respect to contrast. Frequency domain filtering technique is applied to enhance the images and the corresponding enhanced images are presented in this section (Figure 13(a-d) to 16 (a-d)).

With the present results, we demonstrated the dispersion of ZnO nanoparticles in LC 8OBA and 12OBA changing of their textures, phase transition temperatures and shifts in vibrational bands by using polarizing microscope, differential scanning calorimeter and Fourier transform infra-red techniques respectively. The transition temperatures obtained from polarizing microscope are in good agreement with those obtained from DSC. The UV-Visible spectral study confirms the presence of ZnO nanoparticles in the prepared nanodoped LC. The presence of ZnO in LC 12OBA is also confirmed by the EDS data of SEM and the ZnO nanopartilces sizes are in the range of 50 nm-85 nm. To enhance the image quality, frequency domain filtering technique in image processing is used and the enhanced images are giving better contrast to identify the transition phases. 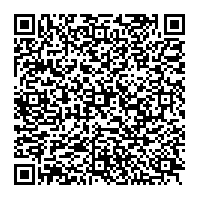