Dark matter effect on galaxies, uncertainty at singularity, quantum geometry leads to Pauli exclusion principal, exact derivation of gravity and exact Coulomb force equation in terms of dark matter so force strength can be compared exactly. How dark matter creates capillary fields in matter and antimatter particle like forward and reverse bias. Quantum mechanical property SPIN is associated with gravity/anti-gravity. Neutrino may have zig zag time arrow. As dark matter will be electrically and gravitationally neutral, dark matter particle will not have spin, so Higgs boson can be dark matter particle.

Dark matter is forming cone like structure. Model is Mery go round of children center shaft taking load of trollies. If is like spinning top. So dark matter density is highest at center of galaxy. Hence at center of galaxy you always get singularity. This singularity is due to high mass density. Dark matter through elasticity acts like shock absorber. Now uncertainty principal is: 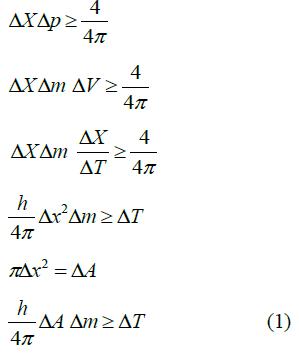 Now at center of singularity T = 0

Which can be said as equation 2 and same way Dirac model in sea of positive time –ve hole can be formed fill by Δ m creating repulsive gravity?

Black hole will have repulsive gravity will make it star.

This cycle will stop when mass of black hole reduces beyond critical mass. So in end singularity will end as super nova. In early universe gravity was weak, so many stars became black hole and absorbed another star, as repulsive gravity sets in star emits star. But at time gravity has become stronger so absorbing star maintains pull on star, creating binary star. Hence 85% of stars are binary. If big bang created uniform mass and energy density it is unexplainable. Now when observed, but when black hole star converts in star it will be in cloud of gases. So, from Earth. We may perceive new star is burned. Buy if may be old black hole becoming star.

Now in alternating electromagnetic field particle C can flip [1], so giving spins 1 reading. Particle A and B cannot swap as they are mirror image. So particle A and B can create orbital with ½ and -½ spin. But it particle A and similar capillary particle will repeat. So I shape capillary particles are bosons and V-shape capillary particles are fermions. That is reason fermions follow Pauli’s principal and bosons follow Bose Einstein statistics. Particles A and B will swing differently in alternating electro majestic field. So Paul’s exclusion principal is due to antigravity field. SPIN is property associated with antigravity. In the case of antimatter fundamental particle capillaries are closed so dark matter creates reverse field same as forward biased and reverse biased, so fundamental matter particles and antimatter particles acts like PN junction for dark matter FIG. 1. So you rotate any Left, right, up and down axis by 90 degrees you get principal time arrow and in GR (2), We have imaginary time. So GR itself says mass is image on universe movie FIG. 2 [2].

Figure 2: Antigravity and gravity are having vector fields. But for getting exact value ratio of coulomb constant to gravitational constant can be used. even in string theory 36 dimensions, hierarchy will not change as multiplying factor will be 36 SPACE=Minkovski space+dark matter with K and-K elasticity+fine tubular structure of quantum level.

Also second law of thermodynamic is not violated also spring do not violate and physical law.

Dark matter is electrically neutral and gravitationally neutral If interacts through physical phenomenal like capillary action surface tension. Because it is gravitationally neutral action, So detecting dark matter problem is similar to U 235 and U 238 separation. As both in chemical reaction behave similar only way is physical i.e. centrifuge or osmosis. As spin is property associated with gravity, so dark matter particle will have zero spin. There is only particle i.e. Higgs Boson. Higgs boson itself can be dark particle [3-5].

If watch is such way that short hand jumps by 2 hrs and reverses by 1 hr, if still complete dial in one round. If short hand jumps 3 hrs forward and 1 hr back ward, if will take 3-1 round to couple dial. So for T forward and f backward, watch will require T-f rounds to complete one circle This apples for 3 hr backward 1 hr forward, if will take i.e. 3-1=2 round to complete clock so such zig-zag time arrow is possible now if particles in such arrow and oscillates if property like mass, then on forward time arrow we will see if changing property after traveling distance so neutrino can be such particles as neutrino change color on that time arrow neutrinos are continuously changing color but from forward time arrow we will see oscillations so tau, electron, mu neutrinosmay be same. Also such particles will not have antiparticles by neutrino size, They are on bounda

So neutrino may have three gravitational stats, gravity, zero gravity and Antigravity.

So dark matter there are two candidates:

Cosmology is process of sequence of events and causes.

So cosmology is nothing but data pre-recorded sequence of cause and events.