In the present work Mero and Carbocyanine dye film have been exposed to dc glow discharge plasma to improve their surface properties for technical application. Surface composition and morphology of the films were analyzed by scanning electron microscope (SEM). Crystallinity of the plasma treated samples of Mero and Carbocyanine dye films were studied by powder X-ray diffraction analysis (PXRD). It was found that plasma treatment modifies the surface both in chemical composition and morphology. The thermal stability of the film was studied by differential thermal analysis and thermogravimetric analysis (DTA-TGA). The presence of various functional groups and optical property of the cyanine dye films are analyzed using Fourier transform infrared spectroscopy (FTIR) and UV-visible spectroscopy (UV-Vis-NIR). The nonlinear optical property of the film was studied by Kurtz-Perry powder technique.

Cyanine dyes introduced in the year 1856 have gained importance for their use in photo dynamic therapy and in various biological activities. They impart light sensitivity to silver halide emulsion in a region of the spectrum to which the silver halide is normally not sensitive. The generic cyanine dyes consist of two nitrogen centers, one of which are positively charged and are linked by a conjugated chain of an odd number of carbon atoms to the other nitrogen, known as Push-Pull alkenes and forms the basis of the polymethine dyes, which contain the 2 strips to polymethine unit as the chromophore [1-4]. The delocalization of electrons across this chain causes them to be highly fluorescent and exhibit long wave length absorption that span from the visible to the near-infrared regions. Cyanine dyes are further classified as cationic strepto polymethines and hemicyanines, anionic streptopolymethine oxonols, neutral streptopolymethine merocyanines and zwitterionic. The squarine-based cyanine dyes depend upon the charge of the streptomethine unit [5-8].

Generally, these dyes have an all-train geometry in their stable form and they undergo photo-isomerization. The merocyanines, carbocyanines and squaring dyes are substances with a variety of colors, but are not widely used for dyeing purposes, as they are de-colorized by light and acid. Merocyanine dyes are high-polarized π-electron systems.

In the present work, Mero and Carbocyanine dye thin films were prepared using Cellulose Tri Acetate as the substrate. The dye thin films were exposed to plasma and the comparative study was carried in the plasma untreated and treated Mero and Carbocyanine dye films. The films were exposed to various characterization techniques such as UV-VIS analysis, Fourier transform infrared spectroscopy, surface morphology, powder X-ray diffraction, differential thermal-thermogravimetric and nonlinear optical studies to assess the suitability of the film for industrial applications.

100 g of cellulose triacetate (Merck GR) was weighed using digital microbalance up to 2 decimal accuracy. A solution was prepared in a one liter mouth glass stopper bottle using a solvent mixture of 500 ml consisting 3 methylene chloride and methanol in the ratio of 9:1 and the weighed CTA. The bottle was mounted in a mechanical shaker till a viscous solution of the above mixture was formed. The viscous solution was further spread on a glass bench with adjustable screws for controlling the thickness of the film.

The glow discharge air plasma was generated by DC high voltage power supply with applied voltage of 450 V. The plasma chamber is a cylindrical stainless chamber of length 50 cm and internal diameter of 30 cm. Initially the chamber was evacuated to a pressure of 10-3 mbar using a vacuum pump maintained by a fine control gas needle valve. Within the chamber there are two square electrodes, anode and cathode, made up of aluminium of length 15 cm each, having exterior high-voltage connections. The electrodes are separated by a distance of 6 cm. A dc potential was applied between the electrodes and the air was supplied through a regulator and kept at preset pressure which was controlled by pirani gauge. A stable glow discharge was generated in the chamber. The mero and carbocyanine dye film were placed perpendicular to the discharge axis between the parallel electrodes using a holder. The operating parameters for the production of plasma in the chamber are listed in Table 1. 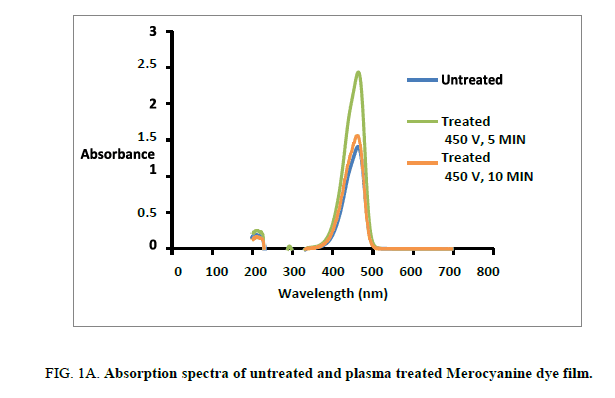 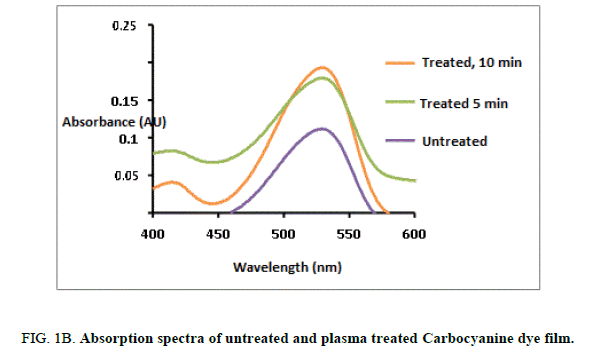 The FTIR spectrums of the untreated and treated Mero and Carbocyanine dye films were recorded by using PERKIN ELMERSPECTRUM I Spectrophotometer in the range of 400 cm-1 to 4000 cm-1 employing KBr pellet technique with a resolution of 4 cm-1. The FTIR spectra for both untreated and treated samples of Mero and Carbocyanine dye films are shown in Figure. 2A and 2B. 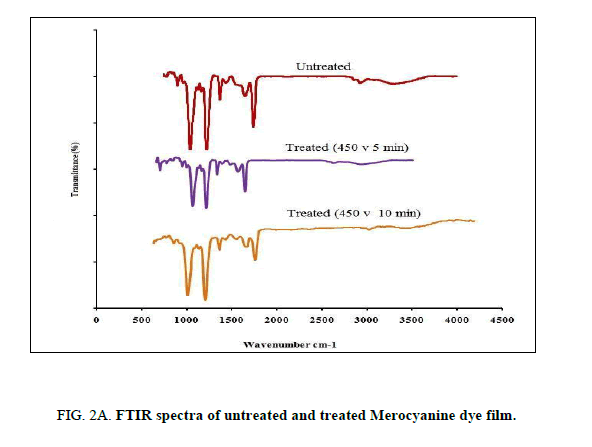 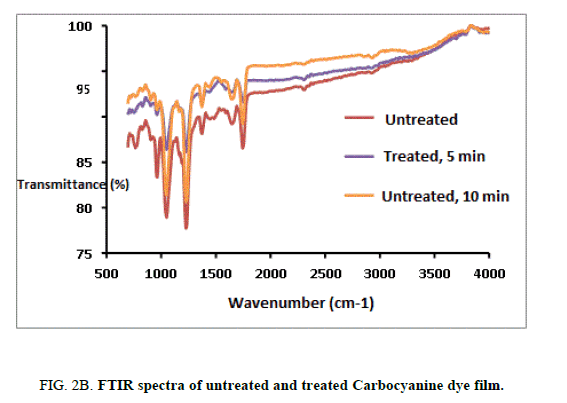 The untreated and plasma treated Mero and Carbocyanine dye films were characterized by X-ray diffraction using a JE0L JDX Service instrument with CuKα radiation (λ=1.5406 A°) in the range 30-80°. at a scan rate of 2°/min. The diffraction patterns of the untreated and treated Mero and Carbocyanine dye films are shown in Figure. 5A and 5B. The d-spacing and their relative intensities of the diffraction peaks are tabulated in 2A and 2B. The crystallite size (d) was calculated using Scherer’s formula from the full width at half–maximum (FWHM) given by the equation 1 [17]. 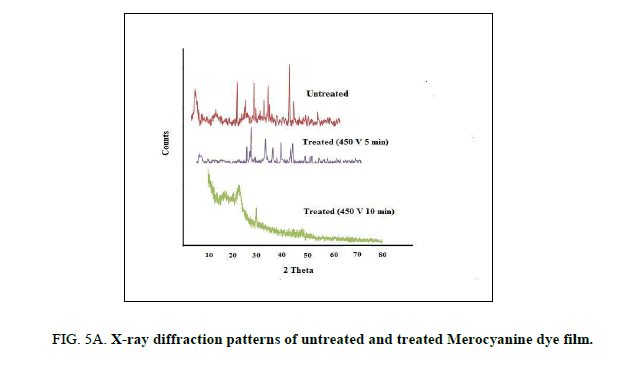 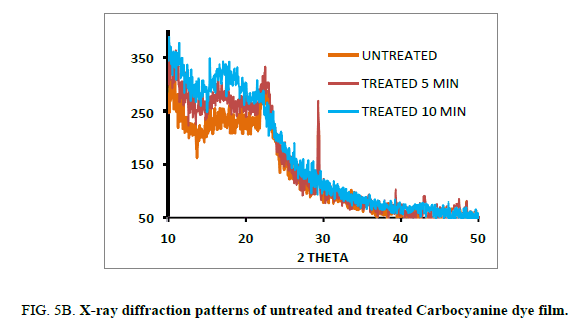 and the lattice spacing d using the Bragg’s equation as given in equation 2.

Where K is the Scherer’s constant (K=0.89), β is the broadening of diffraction line measured at half of its maximum intensity and θ is the Bragg’s angle (Tables 2A and 2B).

It is noted there is no significant change in shape and position of the diffraction peaks, except that the peaks are more intense in the case of treated samples. The full width at half maximum increases with increasing time due to the crystallinity increase of the carbocyanine dye film surface induced by the plasma treatment.

The DTA/TGA analysis were carried with the help of instrument DTA/TGA 6200 simultaneous thermal analyzer between 30°C to 800°C at a heating rate of 20°C/min in nitrogen atmosphere with alumina crucible as the reference and the graph was plotted using pyris software.

Figure 6B and 6C: 5 min in and 10 min DTA and TGA trace of treated Merocyanin dye film. 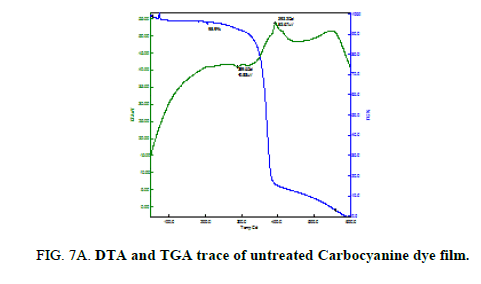 Figure 7B and 7C: 5 min in and 10 min DTA and TGA trace of treated Carbocyanine dye film.

From Figure. 6B and 7B the TGA trace shows a weight loss around 350°C and 400°C and 310°C and 385°C through two stage process and decomposition completes at 800°C and 600°C leaving no residue. The melting point of the sample is observed at 411.2°C for Merocyanine and 288.5°C and 388.8°C for Carbocyanine dye film surface and nature of the reaction is exothermic.

Table 3A. TGA parameters of the untreated and treated Mero and Carbocyanine dye films.

Table 3B. DTA parameters of the untreated and treated Mero and Carbocyanine dye films.

Thus, the Mero and Carbocyanine dye film surface treated with plasma has enhanced stability as compared to untreated one.

Second harmonic generation efficiency of the Mero and Carbocyanine dye films were determined by employing Kurtz-Perry powder technique [20] using Q-switched ND-YAG laser beam of λ=1064 nm with a pulse energy of 0.68 J and a 10-ns pulse width. The output from the sample was collected using a monochromator to collect the intensity of 532 nm component and to eliminate the fundamental. The generation of second harmonic was focused by a lens and detected by photo multiplier tube. The generation of the second harmonic was confirmed by the emission of the green light (532 nm) [21,22]. A sample of KDP (Potassium Dihydrogen Phosphate) was used as the reference material in SHG measurement.

The authors are thankful to Bharathiar University and Sophisticated Testing and Instrumentation Centre (STIC), Cochin for analyzing the tests. 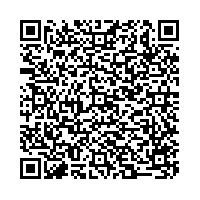