Isotope ratio mass spectrometry was applied to Greek honeys in order to a) record carbon and nitrogen stable isotopes, since data involving Greek monofloral honeys are very limited and b) screen the degree of adulteration with common sugar at concentrations of 2%, 5% and 10% (w/w). In addition, isotope results were compared with some indicative published data in the literature, involving honeys from different regions, in order to investigate any/or not existing differences, with respect to honey geographical origin. Results showed that adulterated honey samples showed significant differences in carbon isotopic values compared to pure honey (P<0.05). The same holds for the differences recorded between Greek honey and honeys from different regions (P<0.05). The application of IRMS has the potential to provide in a short time of analysis, accurate data regarding identity and quality of honey

Since cheap producing countries are pressuring more and more the market with products of low quality and of no evidenced purity, there is a great tendency for the accurate control of quality using fast and reliable techniques.

Honey, the product of honeybees, due to its great variability in composition, is often prone to adulteration with artificial sweeteners [1,2]. Isotope ratio mass spectrometry is the official technique for the quality control evaluation of honey in cases of adulterations with C-4 metabolic plants (i.e. corn syrup, high fructose syrups, isoglucose, etc.) [2-5].

However, this technique has been applied with a high degree of confidence in authentication efforts involving the determination of geographical and botanical origin of honey based on carbon and nitrogen stable isotope ratios [6-9].

Based on the above the aim of the present study was to evaluate the carbon stable isotope values of technically adulterated Greek honey and compare results with those of pure honey, in order to record the degree of adulteration in terms of isotopic values. In addition, isotopic results were compared with those of a native Italian honey or with indicative studies published previously in the literature [2,6] in order to investigate if there are any existing differences according to geographical origin of honey. It should be mentioned that, adulteration trials involving Greek monofloral honey has never been reported before in the literature.

Thyme (Hania region) and fir (Karditsa region) honeys from Greece and multifloral honey from Italy (Bari region) packaged in 250g glass containers were investigated in the present study. About 1g of each homogenized honey sample (thyme, fir, multifloral) was transferred to eppendorf tubes (1.5 mL) prior to IRMS analysis and remained at room temperature.

Sample preparation for total 13C/12C isotope ratio measurements is given in a previous study [9]. Each honey sample was analyzed in duplicate and the relative isotopic values obtained were averaged. The calculated results were accepted if the standard deviation was less than 0.2%. The analysis was repeated if the difference between the two values was higher than 0.2%.

Extraction of the protein from honey was performed following a literature procedure [2,3] with some modificatiosns. In particular, honey sample (c.a.10 g to 12 g) was inserted in a centrifuge tube (50 mL) and then 4 mL of distilled water was added. The samples were vortexed, and a freshly prepared mixture of sodium tungstate (2 mL, 10% w/v) (Sigma-Aldrich) and sulfuric acid (2 mL, 0.335 M) (Sigma-Aldrich) was added thoroughly and vortexed again. The mixture obtained was incubated in a water bath at 80°C for at least 20 min, until visible flocs were formed and the solution obtained was clear. If a clear solution did not appear, sulfuric acid (2 mL, 0.335 M) was then added. For 13C/12C and 15N/14N measurements of extracted protein about 0.50 mg of the extracted protein along with the working standard (c.a. 0.20 mg of commercial casein, Sigma-Aldrich) were directly weighted in tin capsules and analyzed in IRMS instrument as described previously, following the combustion mode [9]. The operational conditions were the same as applied in the δ13C measurements. 13C/12C and 15N/14N isotopic ratio were performed in a single run as shown in (Figure 2). The run time of each experiment was c.a. 6 min for a single run. 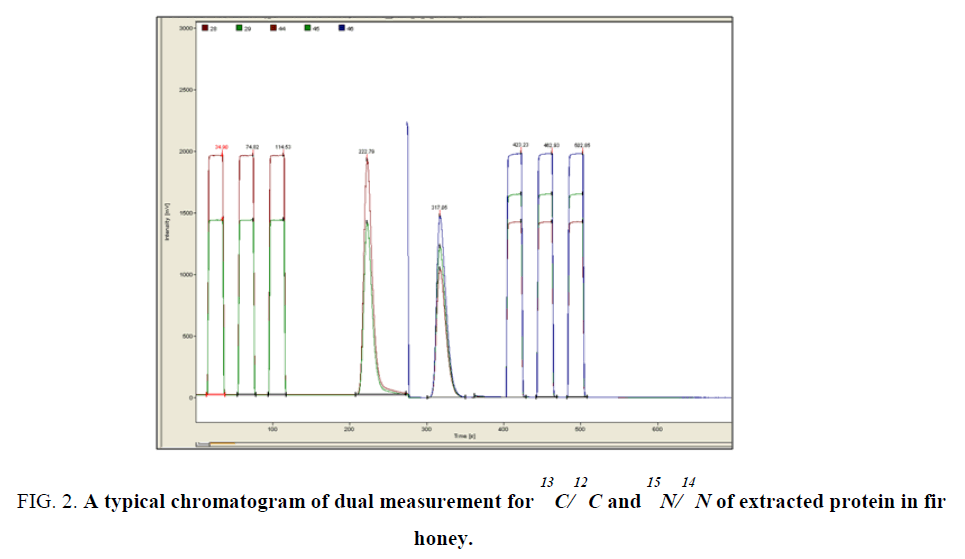 Figure 2. A typical chromatogram of dual measurement for 13C/12C and 15N/14N of extracted protein in fir honey.

Briefly, thyme honey was randomly chosen and adulterated with different concentrations (2%, 5% and 10% w/w) of commercial common sugar. The obtained mixture was homogenized carefully by means of vortex prior to IRMS analysis. Each honey sample was analyzed in duplicate and the relative isotopic values obtained for adulterated honey samples were averaged.

Carbon stable isotope ratio of 13C/12C is expressed as δ13C in the unit of ‰ representing a deviation from an internal standard used in the analysis. The formula of δ13C, along with the degree of adulteration for honey is given in the two equations below [2]:

Average values of isotopes were compared after application of T-test at the confidence level P<0.05, using the SPSS statistics software (v.20.0). Graphs were prepared in Excel 2007 for Windows.

Adulteration results are given in (Table 1) Typical relative chromatograms are shown in Figure 3, Figure 4 and Figure 5. 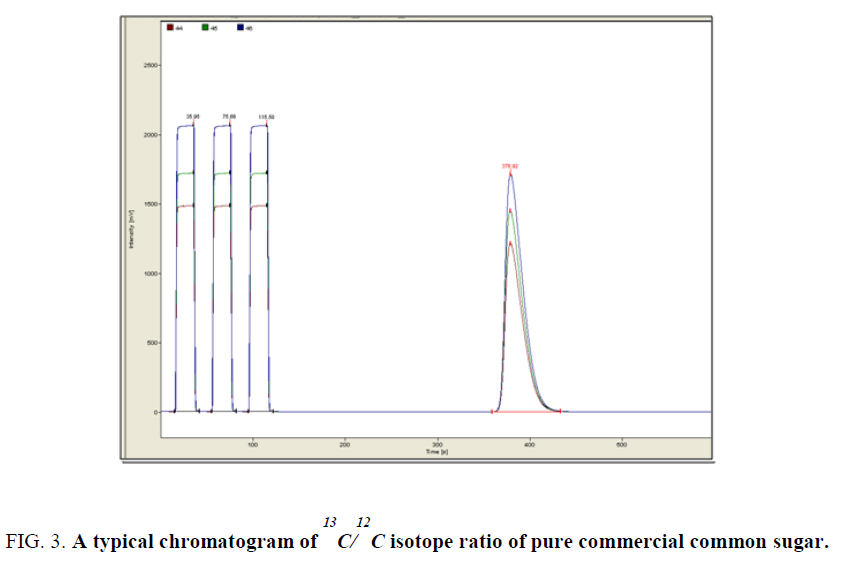 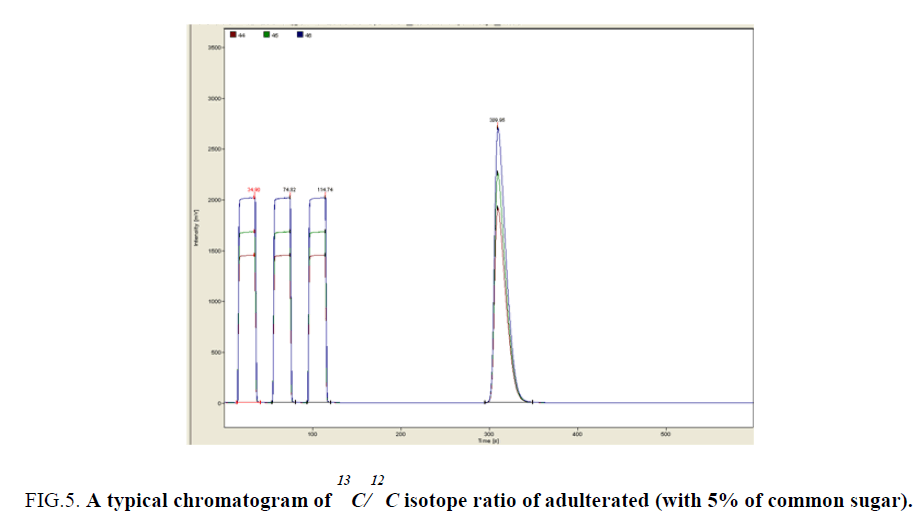 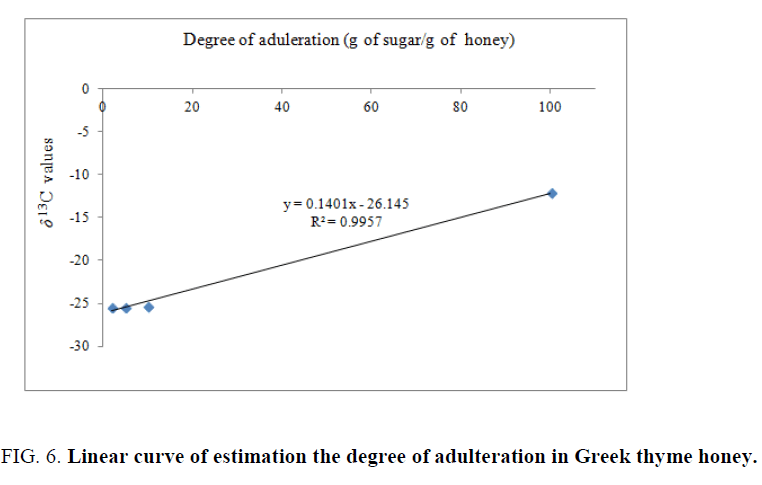 Figure5. A typical chromatogram of 13C/12C isotope ratio of adulterated (with 5% of common sugar).

A curve of almost perfect linearity (Figure 6) was obtained by plotting the average values of delta carbon isotope values against the added sugar concentrations in thyme honey sample, representing the degree of adulteration and possible prediction rate. 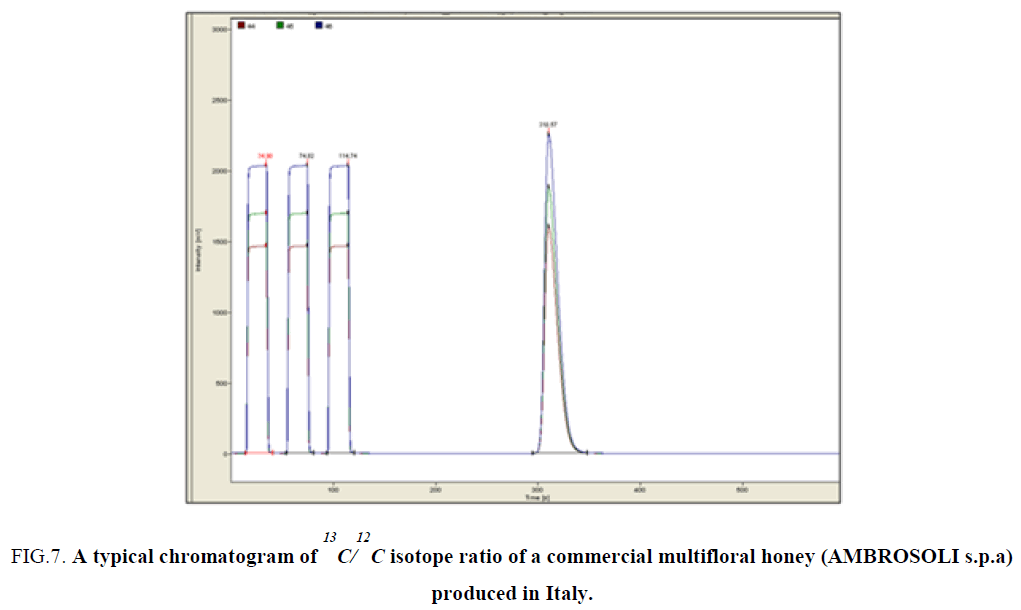 Figure 6. Linear curve of estimation the degree of adulteration in Greek thyme honey.

Present results are in agreement with previous work in the literature, in which IRMS technique provided accurate measurement of the degree of adulteration in honey with an artificial sweetener [1,2,5].

Evaluation of the 13C/12C isotope ratio of a very common commercial multifloral honey (AMBROSOLI s.p.a) produced in Italy and other European honeys with those of Greek monofloral honeys

In this section was also evaluated the 13C/12C isotope ratio of a multifloral honey produced in Italy from a local supermarket in Bari with the aim to compare the isotopic ratio of a multifloral honey via the Greek unifloral honeys analyzed in an effort to differentiate honey from different geographical origin. In Figure 7 is shown the relative chromatogram whereas the δ13C values are -25.64‰. The average δ13C values of Greek thyme and fir honeys were -25.96 and -26.29, respectively [9].

Significant differences (P<0.001) were obtained by comparison of the average carbon isotope ratio values of Italian multifloral honey with those of Greek thyme or either fir honey. Furthermore, Turkish thyme honeys recorded higher δ13C values compared to Greek thyme honey [2]. The impact of geographical origin on carbon isotope ratio values has been reported previously in an exhaustive study involving European honeys [6]. Present results are in conformity with those of the aforementioned study.

Results of the present study showed that in almost 6 min time of analysis useful data may be collected regarding the identity and purity (P<0.05) of commercial honeys by application of isotope ratio mass spectrometry. This is a preliminary study in nature. However, in future work the analysis of a larger number of samples will enhance and further confirm present results.

The authors declare that they do not have any conflict of interest. 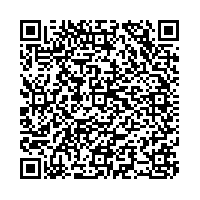