The plant Grangea maderaspatana poir [1] belongs to natural order compositae and is known as Mustaru in hindi. It occurs in throughout India. The leaves of this plant are reported to be stomachic, antiseptic, de-obstruent, and is prescribed in infusion and electuary in case of obstructed menses and hysteria. It is also reported to be used in preparing antiseptic and anodyne fermentation and the leaves juice is employed as instillation of ear ache.

The roots of Grangea maderaspatana poir were collected locally and authenticated by reputed botanist. The air dried and powered roots (2 kg) Grangea maderaspatana poir, natural order composite was extracted with 95% aqueous ethanol and concentrated under reduced pressure. The concentrated ethanol extract was successively extracted with n-hexane, chloroform and ethyl acetate. The concentrated ethylacetate soluble part was subjected to TLC examination when it showed two spots. As such it was chromatographed over silica gel column using solvents with increasing polarity. The fractions collected from (chloroform: methanol) (1:1) gave compound B-1 which was found to be homogeneous on TLC examination. It crystallized from (chloroform: ether 1:1) as yellow needles [1].

Permethylation of compound (B-1) followed by acid hydrolysis

Enzymetic hydrolysis of compound B-1

A compound B-1 along with takadiastase (10 ml) was kept together in a round bottom flask (500 ml) at 25°C for about 50 hrs. There after water was added to it and then it was chromatographed over silica gel column to get proaglycone and L- arabinose (confirmed by Co-PC and Co-TLC). Further hydrolysis with enzyme almond emulsion it yielded D-galactose (column-paper chromatography) and a glycone. 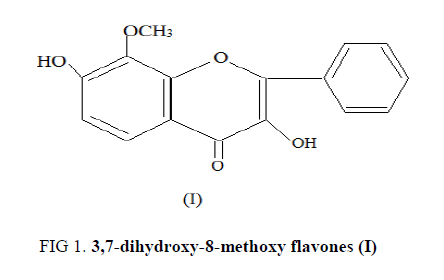 Permethylation of the compound B-1 which was done by procedure of khun et al. [5] and kiliani mixture, yielded 2,3,5 tri-O-methyl-L-arabinose and 2,3,6 tri-O-methyl-D-galactose indicating that D-galactose and L-arabinose were present in B-1 [6]. B-1 on enzymatic hydrolysis with enzyme Takadiastase yielded proaglycone and L-arabinose, (confirmed by Co-PC and Co-TLC), confirming that L-arabinose was linked to galactose through an α-lilnkage and also L-arabinose was the terminal sugar in the glycoside B-1. The proaglycone obtained as above on further hydrolysis, with enzyme almond emulsion, yielded D-galactose (Co-PC and Co-TLC with authentic sample) and aglycone further establishing the presence of β-linkage between D-galactose and aglycone.

In mass spectroscopic analysis, significant fragment at m/z 167 showed the presence of two hydroxyl and one methoxyl group in the ring A of the aglycone B-1, while a fragment at m/z 105 showed the unsubstituted B ring. A bathochromic shift of 15 nm. with NaOAc in the aglycon B-1 established that the hydroxyl group was located at C-7 in it. Partial hydrolysis with killiani reagent gave proaglycone m.f. C22H22O10 m.p.-205°C, [M]+ -446, (FABS) which was identified as 3, hydroxy-8-methoxy 7-O-β-D-galactopyranoside by examination of its UV, IR, 1H-NMR and Mass spectral data [7,8] (FIG. 2).

The glycoside on permethylation followed acid hydrolysis yielded the methylated aglycone m.f.- C17H14O5 m.p.-202°C and methylated sugars [9-11]. The methylated sugars were identified as 2,3,5, tri-O-methyl-L-arabinose and 2,3,6 tri-O-methyl D-galactose. On the basis of above facts the structure of the glycoside (B-1) was assigned the structure as; 3-hydroxy-8-methoxy flavones-7-O-α-L-arabinofuranosyl-(1→4)-O- β-D-galactopyranoside (II).