In this study, we have calculated the variations of cosmic ray intensity during the solar eclipses (including Annular, Total, Partial and Hybrid) from 1990 to 2017 (August) by using the online cosmic ray data from Mexico City Cosmic Ray Observatory. We haven’t found significant changes in the cosmic ray intensity during the solar eclipses in most of the cases. The increment and decrement tendencies of intensity have been observed but in 95% occasions variation didn’t go beyond 2% relative to the days close to the eclipse. The highest amount of variation found is 4.25% (decreased) during an annular eclipses in 2003. If we had analyzed the composition of the cosmic rays with their energies, we could have got a clearer picture.

A solar eclipse is a celestial event in which the Moon passes between the sun and Earth and blocks all or a part of the sun for up to about three hours, from beginning to end, as viewed from a given location. There are four types of solar eclipse namely, Total, Partial, Annular and Hybrid. In a total eclipse the Sun is totally covered by the Moon i.e. the Moon completely covers the photosphere. In a partial eclipse, only a part of the photosphere is covered wherein an Annular eclipse a thin ring of very bright sunlight remains around the black disk of the Moon as the apparent size of the Moon is not large enough to completely cover the Sun. A Hybrid eclipse appears annular and total along different sections of its path.

Mexico City Cosmic Ray Observatory (Figure 1) is a property of the National Autonomous University of Mexico UNAM (Universidad Nacional Autónoma de México, https://www.unam.mx). It detects high energy particles coming from outer space and continuously impinging on the earth´s atmosphere from all directions [7]. It is part of the World Network of Neutron Monitors. The Cosmic Ray Observatory is installed on the Campus of the UNAM (19°19'23.3"N 99°11'07.6"W). It consists of two types of detectors: a Neutron Supermonitor 6NM64 and a Muon Telescope, detecting the nucleonic and the hard components of secondary cosmic radiation, respectively. The detection range of these instruments ranges from 8.5 to 200 GeV of energy. The Mexico City Neutron Monitor has a cutoff rigidity of 8.2 GV it is in continuous operation since 1990. The 6NM64 consists of six proportional counters of Boron Trifluoride (BF3). The intensity of cosmic radiation is affected by pressure changes, so it is necessary to make some corrections to the intensity detected by the instruments to eliminate the variations due to the atmosphere. To do that, the atmospheric pressure is registered concomitant to the cosmic ray intensity and a digital barometer Meteolabor-ag GB1 is used to obtain the five-minute readings of the height of the barometer.

For all types of eclipses mentioned above we’ve got both the increment and decrement in cosmic ray counts relative to the average counts before and after 10 days of eclipse. We have used equation (i) for determining relative variations in intensity (Table 1).

After analyzing the intensity of the cosmic rays for 55 different types of solar eclipses in the earth surface, we have observed that there is very small amount of variation during the solar eclipses. The intensity of the cosmic rays increased and decreased in comparison with the average intensity for before and after 10 days of the solar eclipses [8,9]. The deviations were not greater than 1% most of the cases. In the very small number of occasions, the variation has crossed the 2% mark (Figures 2 to 5 and Table 2). The highest amount of variation was found on 31st May 2003, an annular eclipse that was visible across central partiality was visible throughout Europe, Asia and far northwestern Canada. In that day the intensity was decreased by 4.25% [10]. In Tables 3 and 4 we have just shown the data and the variation of intensity in the cosmic rays during Hybrid eclipses. Indirectly this study also shows that the cosmic rays intensity didn’t change much or almost unchanged over the period 1990-2017 [11,12]. 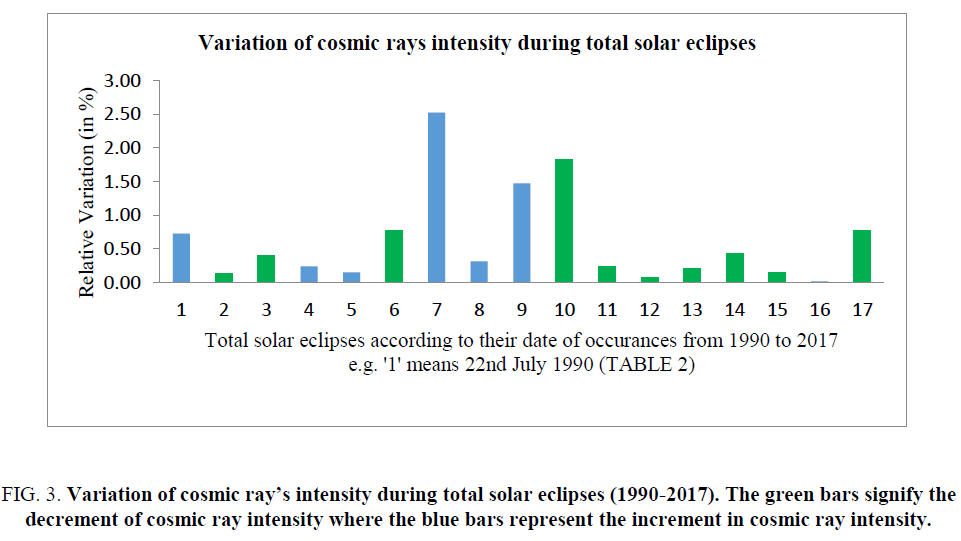 However, the data is so inadequate to visualize the exact situation. We know that the cosmic rays include many types of particles. There may have some variation in the composition of cosmic rays during the solar eclipses which cannot be determined by only analyzing the intensity or the daily counts [13]. We have applied simplest of the equation to study the variations which may not be sufficient enough here. It’s only the average result while taking the data we have found some non-eclipse days where the intensity was below or average. This means that there are actually many other things that are responsible for the increase or decrease in the intensity of the cosmic rays in the earth surface which we haven’t included in our study. We can also study the variation in the energies of the particles. The raw data can be accessed from data site [14]. 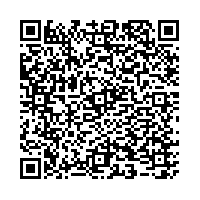