Bidhu SS*, Iren Sobia A and Dickson Benjamin A

The dynamic phenomena that occur in the atmosphere of stars accelerate plasma or particles beyond the escape speed. As a result, the stars lost its mass in all succession. We can detect two forms of mass loss by scrutinizing the Sun, our nearest star; one form is the steady solar wind outflow and other form is the sporadic ejection of large plasma structures, termed coronal mass ejections (CMEs). Coronal mass ejection is a huge outburst of solar mass into the interplanetary space [1]. Coronal Mass Ejections (CMEs) are spectacular and violent phenomena of the solar atmosphere with repercussions throughout the entire heliosphere [2]. CMEs were first detected in the coronagraph images obtained on 1971 Dec. 14, by NASA's OSO-7 spacecraft [3]. They are a spectacular sight when seen to erupt from the Sun with the aid of a coronagraph such as LASCO on the Solar and Heliospheric Observatory SOHO. Observing Large Angle and Spectrometric Coronagraphs (LASCO) on board SOHO (Solar and Heliospheric Observatory), Yashiro et al. [4] have described properties of Narrow CMEs. Whereas Gopalswamy et al. [5] have studied the solar cycle variation of different properties of CMEs such as daily CME rate, average and medium speeds and the latitude of solar sources for cycle 23 from 1996-2003. LASCO/SOHO images represent unique data coverage from solar cycles 23 and 24 and beyond with a single spacecraft [6].

The relation between CMEs and the other phenomena has been examined by many researches [7,8]. Earlier measurements of the CMEs speeds angular width distributions have helped to advance our knowledge of the physical processes in the solar corona. In this paper, we analyze the statistical properties of CMEs during solar cycle 23 and 24 solar maxima by utilizing data from the catalogue of SOHO/LASCO CMEs. SOHO LASCO observed nearly 5200 CMEs during 23 solar maximum and nearly 5700 CMEs are observed during 24 solar maximum even though 24 solar cycle is a weak cycle than 23 solar cycle. Present study compared statistical distributions against observed speed and angular width distributions.

The data collected from SOHO LASCO CME catalogue which is available at http://cdaw.gsfc.nasa.gov/CME_list. SOHO LASCO CME CATALOG contains a list of all CMEs manually identified since 1996 from the LASCO on board the SOHO mission. Over the past 20-years the SOHO LASCO instrument has detecting CMEs. The LASCO instrument consists of three coronagraphs C1, C2 and C3 that span the fields of view 1.1–3RS, 2–6RS and 4–30RS. Both C2 and C3 are externally occulted white light coronagraphs; while C1 has been out of operation since 1998 June which was designed for spectrometric purposes.

Speed distribution of CME during 23 and 24 solar cycle maximum

Figure. 1 and Figure. 2 show the how the number of CMEs distribute during 23 and 24 solar cycle. Mass motion is a basic characteristic of CMEs and quantified by their speeds. Coronagraphs obtain images with a preset time cadence and when a CME occurs, the leading edge moves to a greater heliocentric distance. On measuring the heliocentric distance of the leading edge of a CME in each LASCO image, one obtains CME height as a function of time. Height-time measurements are made in the sky plane, so all the derived parameters such as speed etc. are the lowe r limits to the real values [9]. The height-time plots are then fitted to first order polynomials which give an average speed within the LASCO field of view. The CME velocity general means the radial propagation speed of the top part of a CME frontal loop. 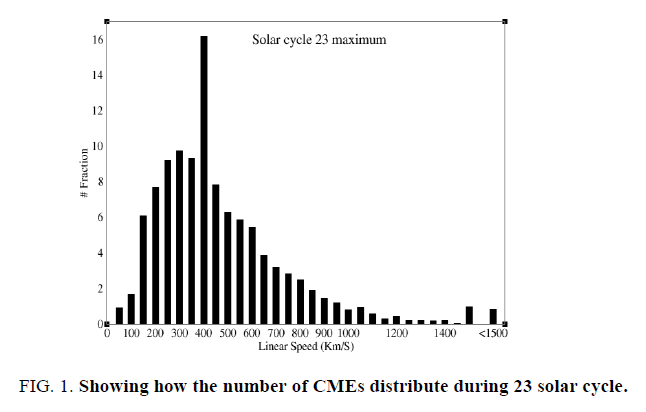 Figure 1: Showing how the number of CMEs distribute during 23 solar cycle. 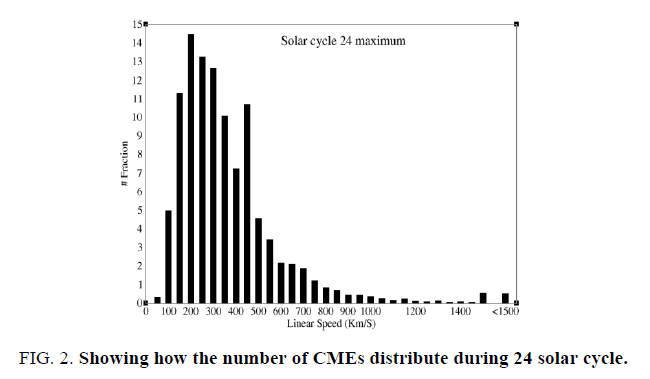 Figure 2: Showing how the number of CMEs distribute during 24 solar cycle.

The angular width of CMEs typically refers to their projected, apparent span, in degree. The angular width of CMEs projected in the plane of the sky ranges from ~2º to 360º [4]. CMEs originating from close to the limb resemble measured width as true width. Many CMEs show an increase in width as they move out, so measurements are made when the width appears to approach a constant value. The Figure. 3 and 4 show the solar maximum phase angular width distributions of 23 and 24 solar cycles. 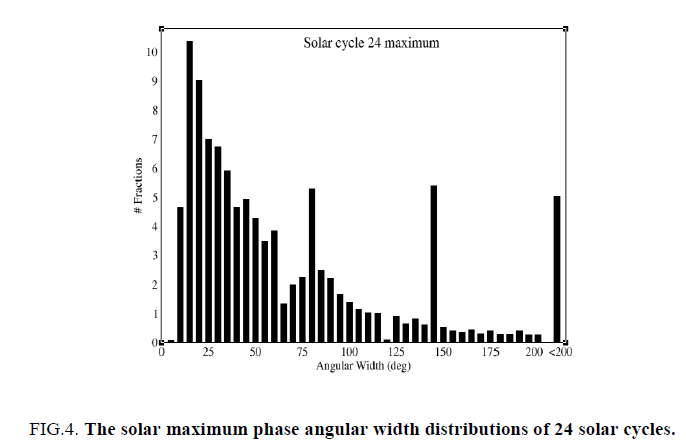