Advances in the Treatment of Primary Liver Cancer

Primary liver cancer (PLC) is one of the common malignant tumors. With high incidence and poor prognosis, PLC has become one of the major diseases which is seriously harmful to human life and health. In recent years, the research work have been summarized on the status of the treatment of primary liver cancer, and great progress has been made, especially the significant progress in the early diagnosis, surgical treatment, and comprehensive treatment of liver cancer made to improve the quality of life of patients. In spite of many methods can be used to improve the quality of life, there are still issues need to be studied deeply. The overview of the progress in the therapy research of liver cancer had been done in this paper that may provide assistance for the further treatment of such disease.

DUF538 protein superfamily consists of several plant proteins of unknown functions. DUF538 is the only significant and recognizable conserved domain that has been reported on this protein superfamily, thus far. The protein members of this superfamily have been distributed in wide ranges of monocotyledonous and dicotyledonous plant species [1,2]. They have been estimated to have molecular weights of about 19 kDa to 21 kDa encoding around 170 amino acids. Recently, the three dimensional petal-like structure of Arabidopsis thaliana DUF538 protein has been determined by NMR and released to the universal protein databases (PDB ID: D1ydua1). It has been shown to possess a protein structure dominated by β-strands.

Several hundreds of DUF538 deduced amino acid sequences have been deposited as hypothetical proteins in universal databases. But, none of the members of this protein superfamily has been found in algae and cyanobacteria so far [2]. DUF538 domain containing proteins have been mostly identified using genome annotation tools and also been cloned as inducible genes from plants challenged with various environmental stresses such as nutrient deficiency (GenBank, BFT415717), crown gall (GenBank, BG131101), and mixed elicitors (GenBank, AW040635) from tomato, and mild drought from Populus (GenBank, CU232042) and Celosia plants (GenBank, AJ535713) without real time analysis and comparison of its expression level [3]. On the basis of the high phosphorylation potential, DUF538 proteins have been predicted to play important regulatory roles in different stress-challenged plants [4]. Our report has revealed that the exogenously applied fusion form of a DUF538 protein by using a plant tissue abrading material activates the redox system of the plant cells [1].

In a recent study, DUF538 proteins have been suggested to affect the bacterial growth rates through the binding to the lipopolysaccharide molecules on the outer leaflet of the bacterial membranes as like as bactericidal permeability increasing proteins in mammalians innate immune system [5]. Then after, by using the bioinformatics tools, DUF538 tertiary structures was predicted to be similar to the esterase-type hydrolases or lipolytic enzymes of which carboxy esterease type B, acyl-peptide hydrolase, entrochelin esterease, and peroxisomal long chain acyl-coA hydrolase were the best matches [6].

Keeping all this information in view, DUF538 members may be suggested as a common stress-related strategy in plant system. In the present research work, as a part of our studies to increase our knowledge regarding the possible roles of DUF538 protein superfamily in plant system, our attempt was made to investigate the expression profile of DUF538 gene expression in the leaf tissues of Celosia cristata plants challenged with drought stress.

Trizol reagent (Cat. no. RN7713C; RNX™; CinnaGen) was used for total RNA isolation, mRNA purification kit was provided by QIAGEN, USA (Cat. No.70022). AcessQuickTM RT-PCR System for cDNA synthesis was purchased from Promega (Cat. no. A1701). SYBR Green dye used for real-time detection of gene expression was from Bio Rad Company. Fermentas DNA extraction kit (Cat. no. K0513) was used for the purification of the PCR product from the agarose gel. Plasmid vector pGEM-T easy (Cat. no. A1360; Promega) was used for PCR product cloning. All of the other chemicals used in this research work were of molecular biology grades.

The seeds of Celosia cristata were taken from our Laboratory stock. Test plants were allowed to grow under normal laboratory conditions of day to night period and humidity. In order to collect the leaf materials, test plant was well watered until sixth leaf stage and then after the water was withheld till the plant was visibly welted. Drought stress conditions were continued for 4 weeks. Experimental materials were collected from leaf tissues before and after stress treatment.

Total cellular RNA was separately isolated from test materials using Trizol reagent, separately. About 0.2 g of each material was fine powdered using liquid N2 and 2 ml of Trizol reagent was added to homogenize it at room temperature (RT). 200 μl of chloroform was added to the mixture, mixed for 15 seconds, incubated on ice for 5 min and centrifuged at 13000 rpm for 15 min. The upper phase was transferred to another tube and RNA was precipitated with an equal volume of isopropanol. The pellet was washed in 1 ml of 75% ethanol, dried at RT and dissolved in 30 μl RNase-free water. The integrity of the RNA was tested on 1% non-denaturing agarose gel using TBE running buffer. Poly (A+) RNA was purified from total RNA using oligo dT-columns according to the provided kit protocol. The integrity of the purified mRNA was also analyzed by electrophoresis using 1% non-denaturing agarose gel. The quantity of the RNA in the starting materials for the next experiments was measured spectrophotometrically [7].

Specific primers used for the amplification were designed based on already reported DUF538 transcript sequence [3]. The primer sequences were designed by online internet-based Primer3 software.

In order to analyze the expression pattern of DUF538 gene, the RT-PCR reactions were separately performed using one-step AcessQuick™ RT-PCR System. About 0.5 μg of each mRNA sample was mixed with 25 μl Master Mix (2X) and 1 μl of correspondent primer set. The mixtures were adjusted to a final volume of 50 μl using nuclease-free water. The reaction mixtures were incubated at 45°C for 45 min and preceded with PCR cycling. PCR was carried out after a pre-denaturation stage at 95°C for 3 min in 25 cycles. The nucleotide sequence of the used primer set and the details of PCR steps were performed as our previous work [1] and presented in Table 1.

In the next step, the amplified products were extracted from the agarose gel, cloned in pGEM-T easy cloning vector [7]. The cloned fragments proceeded for the sequencing in Microsynth DNA sequencing center at Switzerland.

Sequence analysis of the isolated fragments

The nucleotide sequences of the amplified cDNAs were analyzed by computing at BLAST (Basic Local Alignment Search Tool) at http://www.ncbi.nlm.blast.com/, and CLASTALW sequence alignment software at http://www.genome.jp/ and Expasy proteomic tools at http://www.expasy.org/tools/. 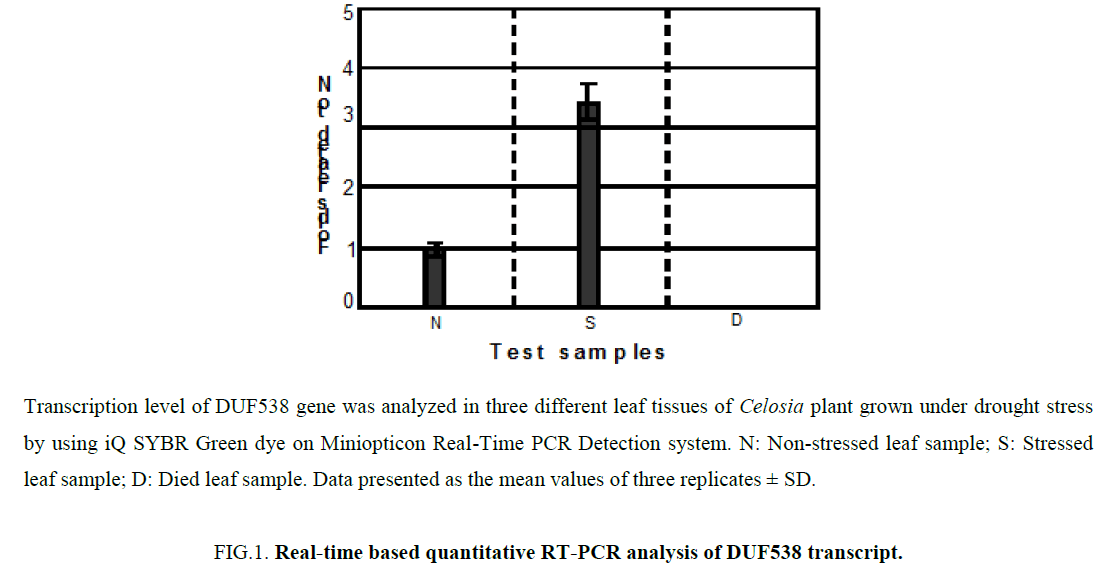 In order to analyze the sequences of the stressed and non-stressed amplification products, they were cloned and sequenced. The nucleotide sequences comparison analysis results revealed that the amplified cDNA from stressed and non-stressed tissues were 100% identical (nucleotide sequence data not presented). Comparison of their deduced amino acid sequences by CLASTALW software indicated that the amino acid sequences of amplified cDNAs are 100% and 50% identical to the previously reported DUF538 cDNA from Celosia plant and EST from Populus [3] (Figure 2).

The expression of DUF538 gene by basic RT-PCR method had been previously reported from different plants grown under stressful environmental conditions such as nutrient deficiency (GenBank, BFT415717), crown gall (GenBank, BG131101), and mixed elicitors (GenBank, AW040635, and mild drought from Populus (GenBank, CU232042) and Celosia plants (GenBank, AJ535713) [3]. All these expression data were to our knowledge without real time analysis and comparison of gene expression level. The present real-time data related to DUF538 gene expression suggest that DUF538 protein members are highly induced under drought condition and might have potential role in drought-stressed plants such as Celosia. It has been understood that the products of drought stress inducible genes are classified into functional and regulatory proteins. The regulatory proteins regulate the various environmental stress signal transduction pathways. They have been usually known to control the expression of other stress-inducible genes in plant system [9-11]. These include various transcription factors, protein kinases, protein phosphatases, enzymes involved in phospholipids metabolism and other signaling molecules such as calmodulin – binding protein [12,13]. According to the constitutive as well as stress-induced gene expression of DUF538 protein member in Celosia plants and considering its expression under other stress-challenged plants, DUF538 protein superfamily seem to be putative candidate for common stress-related proteins possibly common regulatory factor which may be involved in various plant stress responses.

The present real-time data may suggest that DUF538 gene activity may be as one of the drought stress defense responses in plant system. Our survey on the distribution of DUF538 members by using internet-based ortholog cluster analysis showed that DUF538 superfamily is distributed widely in dicot and monocot plants (Figure 3). Basal magnoliophyta, ferns and mosses were also found to have got this protein. But, animals, green algae, red algae, fungi, protests and prokaryotes were not found to contain DUF538 proteins. The distribution pattern of DUF538 in eukaryotic photosynthesizing organisms implies that the functional properties of this protein superfamily might be conserved and it might play an important role in photosynthetic organisms. On the other hand, the recent nomination of DUF538 protein family as the potential structural and functional homologue of mammalians bactericidal protein in plants provide a basis to study the potent anti-stress functions of this protein family or their homologues in mammals, too [5]. As an initial report, we hope our results will provide a new research gate to study the detailed bio-physiological roles of DUF538 gene product in plant or animal system with regard to environmental stress stimuli.

The author of this study is thankful to Research Institute for Fundamental Sciences, University of Tabriz, Iran for supporting of this work.