Diabetes is one of the first diseases described with an Egyptian manuscript from c. 1500 BCE mentioning “too great emptying of the urine.” The first described cases are believed to be of type 1 diabetes. Indian physicians around the same time identified the disease and classified it as madhumeha or honey urine noting that the urine would attract ants. The term "diabetes" or "to pass through" was first used in 250 BC by the Greek Apollonius of Memphis [1].

Diabetes mellitus is a metabolic disease characterized by high blood glucose level resulting from defects in insulin secretion insulin action or both, becomes the rule.

Magnitude of the problem

India has the largest diabetic population and one of the highest diabetes prevalence rate in the world with high mortality and morbidity rate associated with diabetes. Diabetes shows highest occurrence between age group in year 45 to 64 (42% of total diabetic patient) and 25 to 44 (23% of total diabetic patient) According to recent estimates, approximately 285 million people worldwide (6.6%) in the 20-79 years age group have diabetes in 2010 and by 2030, 438 million people (7.8%) of the adult population, is expected to be diabetic. The largest number will take place in the regions dominated by developing economies. International Diabetes Federation (IDF) estimate that, 50.8 million people suffer from diabetes in India.

In this type, there is a absolute deficiency of insulin; it is called as IDDM because regular insulin injections are required to prevent death. It is known as juvenile onset diabetes because it is most commonly develops in people younger than age 20 years, although it persists throughout life IDDM appears to be an autoimmune disorder. Once in which person’s immune system destroys the pancreatic beta cells that occur in genetically susceptible people.

This type represents more than 90% of all cases of diabetes. Types II diabetes most often occurs in people who are over 40 Since type II diabetes usually occurs later in life, it is called maturity onset diabetes. Clinical symptoms are mild and the high glucose levels in the blood. Usually can be controlled by diet, exercise and weight loss. Sometimes, antidiabetic drugs are needed. Most of these drugs stimulate insulin release from beta cells of pancreas (Figures 1-2). 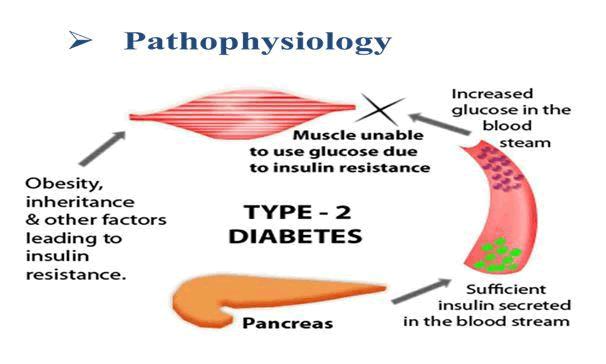 Herbal medicine is the oldest form of healthcare known to mankind. Herbs had been used by all cultures throughout history. Diabetes mellitus has been identified by Indian council of medical research (ICMR) as one of the refractory diseases for which satisfactory treatment is not available in modern allopathy system of medicine and suitable herbal preparations are to be investigated [3]. A large number of polyherbal preparations have been reported to possess antidiabetic activity over last several decades.

For evaluation of the selected polyherbal formulations for antidiabetic activity experimental groups were treated with standard (Glimiperide) and test formulations in alloxan-induced diabetic rats by testing its effect on fasting blood glucose level using autoanalyser glucose kit. Alloxan monohydrate, at a dose of 120 mg/kg body weight, caused sufficient damage to pancreatic β cells, so that secreted insulin was not enough to regulate blood glucose and resulted to a significant increase in blood glucose levels. Alterations of lipid profile are common in diabetic conditions.

In the report of IOM (International Organisation of Migration) it has been estimated that until 2050 there will be 200 million climate refugees [4].

After completion of the study protocol, it was found that with test and standard treatment, the serum level of glucose improved significantly (P<0.05) as compared to diabetic control. In comparative evaluation all formulations found to be effective. The formulation PD1 was found to be more efficacious as compared to others in lowering the blood glucose level. The significant antidiabetic activity of formulations is due to inhibition of free radical generation and subsequent tissue damage induced by alloxan or potentiation of plasma insulin effect by increase of either pancreatic secretion of insulin from existing beta cells or its release from bound form as indicated by significant improvement in glucose level [5].