Carboxymethyl cellulose (CMC), was synthesized from cellulosic rag, a textile waste of textile and garment industries in aqueous ethanolic sodium hydroxide and subsequently mono-chloroacetic acid reaction medium. Low substituted to high substituted products were obtained from single step to seven step carboxymethylation of cellulose. In this way, it was possible to produce low cost and different grades of substituted carboxymethylated cellulose. The synthesized CMC was characterized and their physical properties were investigated. Solubility, CMC content, degree of substitution and molecular weight of CMC were increased gradually with the increase of the number of reaction steps, although fourth step attained the optimum. The degrees of substitution of CMC from one to seven reaction steps were 0.90 to 2.84, respectively. Similarly, CMC content and molecular weight of CMC were 72.60% to 85.00% and 153,886 to 252,231, respectively. The structure of CMC and grafted CMC were investigated by FTIR, 13C NMR and SEM. The prepared CMC was applied as a sizing agent to develop the physico-chemical characteristics of fabric and yarn as well. Grafting of prepared CMC film with methyl methacrylate (MMA) monomer increased their strength 86.11%, although decreased rigidity and moisture content due to the incorporation of hydrophobic MMA monomer was observed.

Carboxymethyl cellulose (CMC) is one of the most versatile cellulosic derivatives of the present day world and tremendously used in textiles and many other industrial fields including food products, paper, cosmetics, pharmaceuticals, and adhesives [1]. Hence it is most important in the textile manufacturing and in everyday life. It is true for present day that Bangladesh is a textile industry-based country and large amount of CMC is being imported to meet its demand for textile sector in every year and the importance of CMC is increasing day by day [2]. It has been reported that CMC was prepared from different cellulosic sources by different researchers following many different methods [3-8]. Many researchers have investigated the synthesis of CMC from different cellulosic sources, such as paper sludge [3], hyacinth [4], wood residue [7], cotton linters [8,9], bagasse [10], etc. No worth mentioning work has been performed on the synthesis of CMC from knitted rag. Knitted rag contains high amount of good quality α-cellulose which is 95% to 98% [11], and huge amount of knitted rags are deposited as textile wastes in different garment industries that have virtually no use. The wastes contain both coloured and non-coloured rags. These are normally dumped in nearby area, and degraded naturally. Hence these created environmental pollution.

As the rags contains high amount of good quality α-cellulose, it can easily be collected with almost free of cost and it will be a great source for the manufacture of CMC and other derivatives. The purpose of the present work is to explore the use of these knitted rags by synthesizing different grades of CMC by applying multiple steps carboxymethylation techniques. In this report, a multiple step carboxymethylation techniques will be adopted for producing lucrative CMC, with good solubility and fair degree of substitution (DS). The unique feature of this report is the reuse of the recovered ethanol used in carboxymethylation, the synthesis of CMC with high DS, the synthesis of grafted CMC, and the application of CMC to textiles.

Preparation of sample: The knitted rag, a cellulosic raw material, was collected from Mozart Knit Limited, Ashulia, Saver, Dhaka. The collected knitted rag, a wastes of garment industries, contains both non-coloured and coloured rags. The coloured knitted rag was washed with 1% Na2CO3 solution at 60°C [9]. The colored knitted rag was immersed in bleaching liquor containing 4% (w/w) of 35% (w/w) hydrogen peroxide, 2.5% sodium silicate and 1% sodium hydroxide on the basis of fibre in the rag-liquor ratio of 1:50 at 40°C for 1 h. Then the temperature was raised to 85°C and continued for 3 h with occasionally stirring [12]. Finally the non-coloured knitted rag was washed with sufficient fresh water and then dried in air.

Carboxymethylation: The CMC was synthesized by the conversion of alkali cellulose swollen in aqueous NaOH and a surplus of an 95% ethanol with monochloroacetic acid. The production of CMC was carried out by the following two steps:

(a) Basification: The first step provided the formation of a reaction mixture (1 g knitted rag) comprising a solution of an 18% aqueous ethanolic NaOH carefully controlled to 30°C for 3 h with occasionally stirring. This step is known as steeping.

(b) Etherification: In the second step, an 80% (w/v) aqueous mono-chloroacetic acid (ClCH2COOH) was added drop by drop to the previous mixture and carefully controlled its temperature to 50°C for 6 h. This step is known as carboxymethylation step.

Determination of degree of substitution (DS): One gram of dried CMC was added to 100 ml of distilled water and 12.5 ml of 1 N NaOH. After dissolving the mixture was titrated by 1 N HCl. The DS of CMC was determined by following equation [4,13] as:

where, A is the milliequivalents of sodium hydroxide required per gram of sample.

where, K is the constant, a is the polymer shape factor, [η] is the intrinsic viscosity and M is the molecular weight of Na-CMC, using Oswald viscometer at 35°C.

Determination of NaCl in Na-CMC: To determine NaCl amount, 2 g of CMC was added to 250 ml of 65% aqueous methanol and kept for 5 h. 100 ml of liquid phase was neutralized by dilute 0.1 N HNO3 and titrated with 0.1 N AgNO3 solution [6]. The NaCl content was calculated as:

where, V (ml) is the amount of AgNO3 solution and M (g) is the weight of dried sample.

Method of grafting: Graft polymerization of CMC was carried out with 80% MMA, 5% K2S2O8 and 5% FeSO4 at 60°C for 90 min in the CMC-liquor ratio of 1:30. Graft yield and grafting efficiency was calculated according to the following formula [15,16] as:

Moisture content: The grafted and ungrafted 2% CMC films were weighed accurately and dried it at 105°C for 2 h in a forced convection oven (FC-610, Toyo Seisakusho Co. Ltd., Japan). Then cool in a desiccator for about 30 min and weighted again. Moisture content was determined using the equation below [17]:

Water absorption: The grafted and ungrafted 2% CMC films (6 cm × 4 cm) were weighed accurately and immersed in distilled water for 15 h at room temperature 30°C. The films were wiped using tissue paper and weighted again. Water absorption was determined using the equation below [18]:

Gel content: The grafted and ungrafted CMC films (6 cm × 4 cm) was weighed and placed in a cellulose extraction thimble in the Soxhlet extractor. The solvent extraction was carried out with 250 ml toluene for 6 h. After that, the samples were taken out followed by vacuum dried and re-weighed until it approached a constant weight. Gel content of the grafted and ungrafted CMC films was calculated according to the following equation [18]:

where, W0 is the weight before extraction and W1 is the Weight after extraction.

Tensile strength: To determine breaking load of CMC film and modified CMC film with MMA were measured by using the Tensile strength tester (Harada Co. Ltd. Nagano–ken, Japan). Length of the film between the jaws is 1 cm.

Identification of CMC and graft: The washed knitted rag and prepared CMC was dried at 50°C and was made it fine powder using motar-pastle. This powder sample was mixed with KBr in the ratio of 1:125 and a pellet was prepared. Then, IR-spectra of this KBr pellet was recorded with a FTIR spectrometer (Model: FTIR-8900, Shimadju, Japan).

The synthesis of Na-CMC from knitted rag (1 g) was carried out according to the Scheme 1. The potentiality of the process is the re-use of ethanol after washing of crude Na-CMC. The effect of solvent system, alkali concentration for basification, concentration of mono-chloroacetic acid for etherification, time and temperature of the reaction for the degree of substitution (DS) were studied. The reaction was optimized with respect to the DS by varying each of the parameters. The yield of Na-CMC, DS in Na-CMC and molecular weight of Na-CMC obtained from carboxymethylation process at one to seven steps are shown in Table 1. 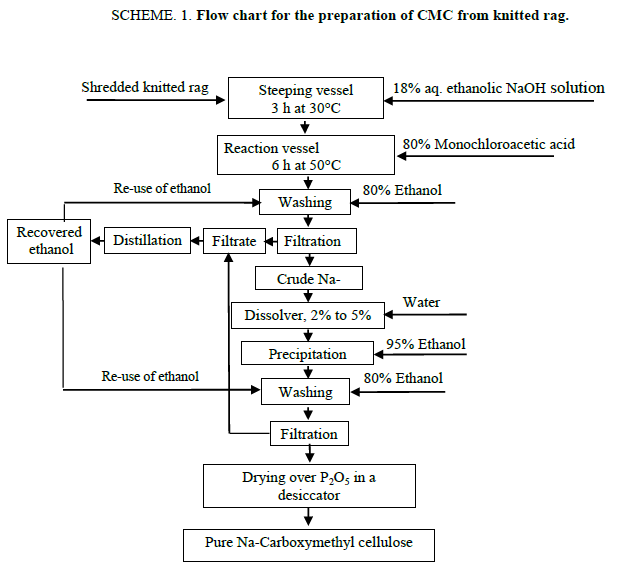 Scheme 1: Flow chart for the preparation of CMC from knitted rag.

Table 1: Determination of yield of Na-CMC, DS in Na-CMC and molecular weight of Na-CMC from knitted rag at different reaction steps.

The carboxymethylation reaction was optimized with respect to DS by varying each of the parameters. The DS of the prepared Na-CMC was determined by the acid-base titration method [4]. The DS data of all steps are listed in Table 1. It can be seen from Table 1 that DS increased very fast at the initial step but after the 4th step, the increasing rate of DS is slow. The reason of this phenomenon was due to the fast substitution reaction for initial steps under alkaline conditions. The hydroxyl group of cellulose in knitted rag was very active and could be replaced by carboxymethyl group, which decreased the number of OH groups very fast. The molecular weight of Na-CMC obtained from each step was determined by viscosity measurement. The viscosity measurement of each Na-CMC sample was calculated by using “Mark-Houwink-Sakurada” equation [16], [η]=KMa. From Table 1 it can also be seen that the molecular weight of the prepared Na-CMC increased gradually with the increase of reaction steps from step one to seven. The reason is that as the DS increased with successive steps, number of OH groups attached to cellulose molecule was replaced by carboxymethyl groups. As the molecular weight of carboxymethyl group is higher than the OH group, the molecular weight of final product Na-CMC also increased with the reaction steps. Table 3 shows that increase of DS and molecular weight was string down with the number of successive steps indicating the DS of Na-CMC went on to the completeness of the substitution reaction. 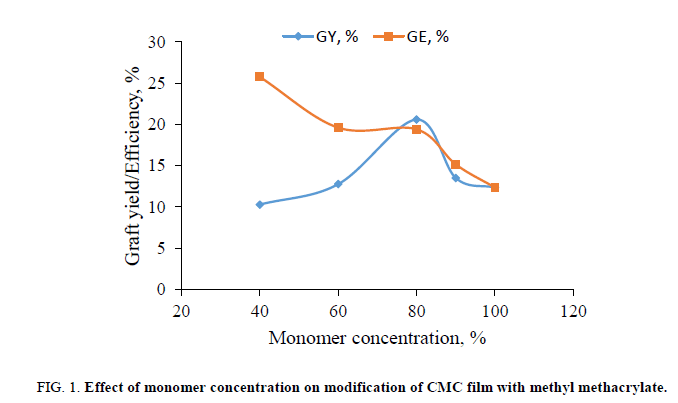 Figure 1: Effect of monomer concentration on modification of CMC film with methyl methacrylate.

Table 3: Determination of CMC, NaCl and others in synthesized Na-CMC.

The FTIR spectra of standard CMC film (DS=0.8), prepared CMC film (DS=2.71), and MMA-grafted CMC film are shown in Figure.2. From Figure.2, it can be seen that the peaks assigned at 1630 cm-1 and 1420 cm-1 indicate the presence of carboxymethyl substituent in both standard CMC and prepared CMC films (Figure. 2(b,c)). The carboxylate ion [19] gives rises to two Peaks: a strong asymmetrical stretching Peak within 1650 cm-1 to 1550 cm-1 and a weaker symmetrical stretching peak near 1400 cm-1. Two weak peaks near 1630 cm-1 and 1420 cm-1 in cellulose was observed which are due to absorbed water and CH2, respectively. Hence the occurrence of strong peaks in CMC films confirmed the formation of CMC by the process of etherification between knitted rag and mono-chloroacetic acid in strong alkaline alcoholic medium. An extra absorption band at 1741 cm-1 was observed in grafted CMC film indicating the stretching of C=O group, which was the introduction of ester carbonyl group of the grafted MMA [20,21]. So the appearance of new peak in the spectra of CMC film-g-MMA gave supporting evidence for the grafted product and suggests that MMA had been successfully grafted onto prepared CMC film. 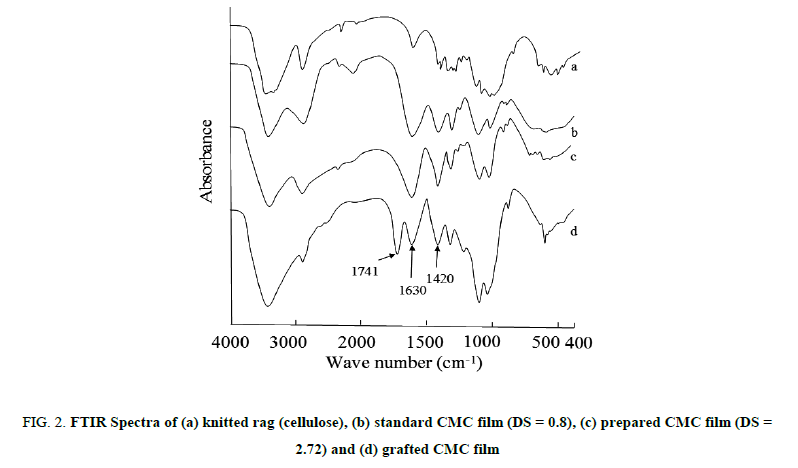