I present behavior of the dynamically interesting potentially dangerous asteroid (29075) 1950 DA. Using the public available OrbFit software I studied orbit of asteroid 900 years forward in the future searching for close approaches with the Earth, which lead to possible impact in 2880.

The orbit of the asteroid (29075) 1950 DA was computed using the freely distributed OrbFit software, version 5.0.5 (http://adams.dm.unipi.it/~orbmaint/orbfit/ ). This new version includes the new error model and the debiasing and weighting scheme described by [3] and the DE431 version of JPL's planetary ephemerides. The NEODyS site (http://newton.dm.unipi.it/neodys/) and the OrbFit software used above given star catalog debiasing and an error model with assumed astrometric RMS errors computed from the tests in the above paper. We can compute the Yarkovsky non-gravitational effect as a model uncertainty, that is solves for 7 parameters instead of 6, i.e. only orbital parameters. This applies both to the orbit determination (at the initial epoch) and to the propagations used in the impact monitoring procedure.

Nongravitational effects in orbital motion of asteroid can be taken into account in various ways. The simplest one is to assume the existence of a secular change of semimajor axis of the orbit, da/dt. We can also compute the non-gravitational parameter A2. Negative value of A2 for asteroid denotes that the mean semimajor axis drift da/dt<0 and hence asteroid can be retrograde rotator. Observational arc length is 24824 days (almost 68 years) so it is possible to compute non-gravitational parameter A2.

The TABLE 1 also includes their 1-σ uncertainties, which are the square roots of the diagonal elements of the computed covariance matrix. RMS is the quadratic mean of the residuals between the calculated orbit and all 588 observations used in the solution.

I computed directly from the OrbFit software an absolute magnitude H of (17.064 ± 0.507) mag. Hence, I calculated the diameter D of the asteroid from its H and albedo pv using the formula of [7]:

where D is in km. 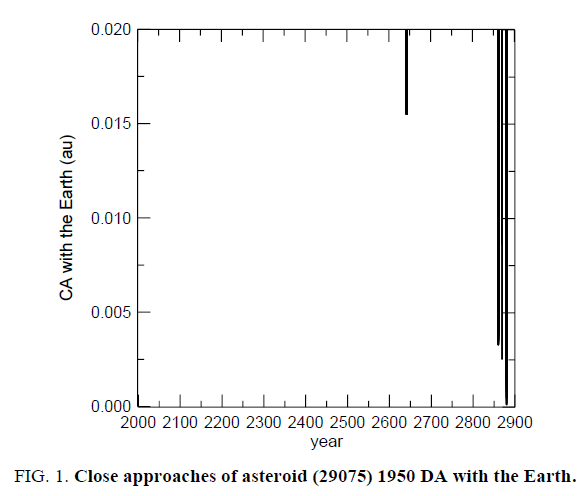 Next, using starting orbital elements from TABLE 1 and 601 Vitual Asteroids (clones) (VAs) with 3-σ uncertainties, and propagating them till 2900 I searched for impacts with the Earth. TABLE 2 presents possible impact solution for 2880.

The main goal of my work is to present methods which allow us to follow the orbit of the potentially dangerous asteroid (29075) 1950 DA. I computed the minimum distances between the asteroid and the Earth in the time-span 900 years forward from now. I found impact solution for 2880. It is possible to recover asteroid (29075) 1950 DA in 2032 when the distance to the Earth will be of about 0.076 au. Optical and radar observations made during this close approach can refine the orbit of the asteroid and give more precise possible impact solutions.